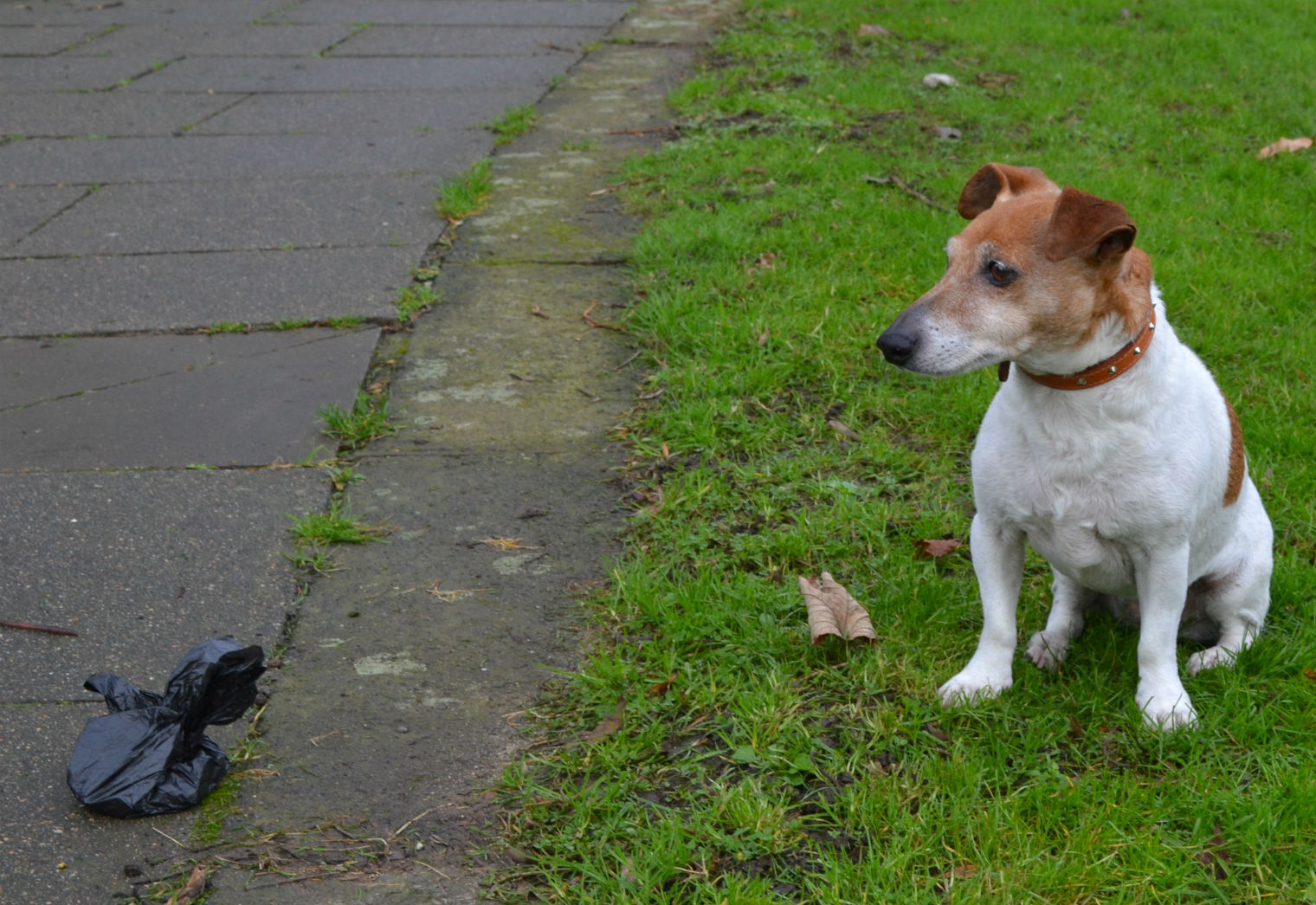 We are dog lovers here. In fact, the office mascot is my 11-year-old Jack Russell Pepper, who’s been through her fair share of life’s ups and downs.

But I’m a responsible dog owner, too. A poo will always be scooped up and dropped in a bin, no matter how inconveniently far away from said receptacle the pooch has decided to relax her bowels (and it can be the least opportune spot, I can assure you).

Did you know, however, that a thousand tonnes of canine excrement is deposited on UK pavements a day by eight million dogs? And we can’t stop reading about poo wars, how sick of it people are, and why nothing is done about it. In Camden, you can even get a pink chalk spray from the council to shame offenders on your street.

And it’s something locals love to moan about it. Writer Caitlin Davies talks of her earliest memory “cycling down dog poo alley on the way to school” (that’s College Lane to you and I); journalist Giles Coren, when asked what he hates, says simply: “Dogshit on my street.” Gospel Oak-based radio and TV presenter Edith Bowman agrees: “Being a pram user, I’ve lost count of the amount of times I’ve cursed mistaking a steaming turd for a pile of leaves that has then required the power hose. We need Dog Poo Wardens, on the spot fines or take the bloody dogs off them if they can’t pick up their mess. It’s disgusting.”

Over in Islington, did you hear about the 22-man ‘crack team’ unit employed to target dog walkers who fall foul of laws? And remember the much-publicised case of Amber Langtry getting stalked by an ‘enforcement officer’ in Victoria Park, east London, to pick up a phantom poo that she insisted her German Shepherd hadn’t produced?

It’s seemingly a subject that will never quite fade away. Like a big pungent pile of you-know-what.

Some of us may remember growing up in the 1970s or 1980s when white dog poo littered pavements, but it’s quite a surprise that the poo-picking law dates back only to 1996 in the UK.

Under the Dogs (Fouling of Land) Act, failure to clean up became an offence subject to a maximum fine of £1,000. There is also the option of paying a fixed penalty fine of up to £80 rather than going to court.

Today, local Authorities (LAs) have the power to introduce and enforce dog fouling bye-laws, under which a person in charge of a dog can be heavily fined for ignoring Fido’s deposit in a public place. The Clean Neighbourhoods and Environment Act 2005 applies to ‘LA’-designated land, which includes roads and parks.

Oh, and it’s no defence to claim ignorance of either your dog’s actions or the law; neither is having nothing to hand to scoop up the mess. And councils such as Camden have introduced their own methods, such as the spray.

How did the fad for poo-picking begin?

Like many things, from house music to buttermilk chicken, the vogue for cleaning up your animal’s poo all started in the US. In New York, it became a milestone in the career of Mayor Koch, who was in office three times until 1989, the man who set into motion the first ever truly enforceable law that dog walkers must pick up waste on the streets.

US writer Maggie May writes on her blog that “it wasn’t until the 70s that New York Mayor Koch enforced the ‘pooper scooper’ law. New York led the way for many other states to fine tune dog poop laws, but there still is no federal law. Other countries like France provide public cleaning services that scoop up the poop.”

What’s interesting is that before the changes, animal activists thought it absurd. “It’s hard to imagine eight million people trying to avoid dog refuse on the streets of New York City on a daily basis,” reads an extract from a book, New York’s Poop Scoop Law.

“Likewise, it’s harder not to imagine New Yorkers from all walks of life picking up after their canines. Not long ago, clearing up after your Poodle, Puli, or Pekinese was not a basic civic duty. Initially, many politicians thought the idea was absurd. Animal rights activists were unanimously opposed.”

And the American Society for the Prevention of Cruelty to Animals condemned the proposed legislation because “it would impose undue hardship on dog owners”.

Incredible, right? And yet soon, as we all know, the legislation was to sow the seeds of what has gone on to become an international success.

So what can be done?

Fast forward a fair few years and we haven’t seen anything funnier than a reader who decided to go vigilante.

“I don’t know if you are aware of how much shit is all over the pavements on Highgate Road,” Cara Lorrimer wrote to us, perhaps a tad inelegantly (let’s face it, she may as well call a spade a spade). “But it’s become a real problem. How can this area flourish if we don’t take care of it?”

Cara made a sign (see above) to tackle the issue. “I just got so fed up with doing little dances around piles of poo in the street,” she says. “My initial idea was to make signs on lolly pop sticks and stick them in the poo. After not wanting to touch the actual poo, I stuck a sign next to it which said – ‘REALLY? If you can’t clean up your dog poo then you’re incapable of having a dog for a pet.’”

Cara stood watching people walk mindlessly along, texting, and daydreaming after a long day at work, and yet “the sign was not noticed. Some girls giggled at the crazy lady making sure the corners were stuck down properly. I counted six people in seconds doing the same dance I did minutes before, and realized my point.”

Cara wonders if there are any other creative ways (not classified as vandalism) that people could think of to lessen the issue? “Can poo activists step forward?” she asks.

Now there’s a call to arms if ever there was one. And, penalty fines by the council aside, as for the fluorescent pink spray that’s doing the rounds, we don’t think that’s particularly effective, either. But it certainly highlights the problem.

So can there ever be a resolution? It simply has to go back to the owners: just be responsible, for goodness’ sake, if you own a pet – and meanwhile take care, as always, to dodge the doggy-do.

What do you think could be done? Let us know below.