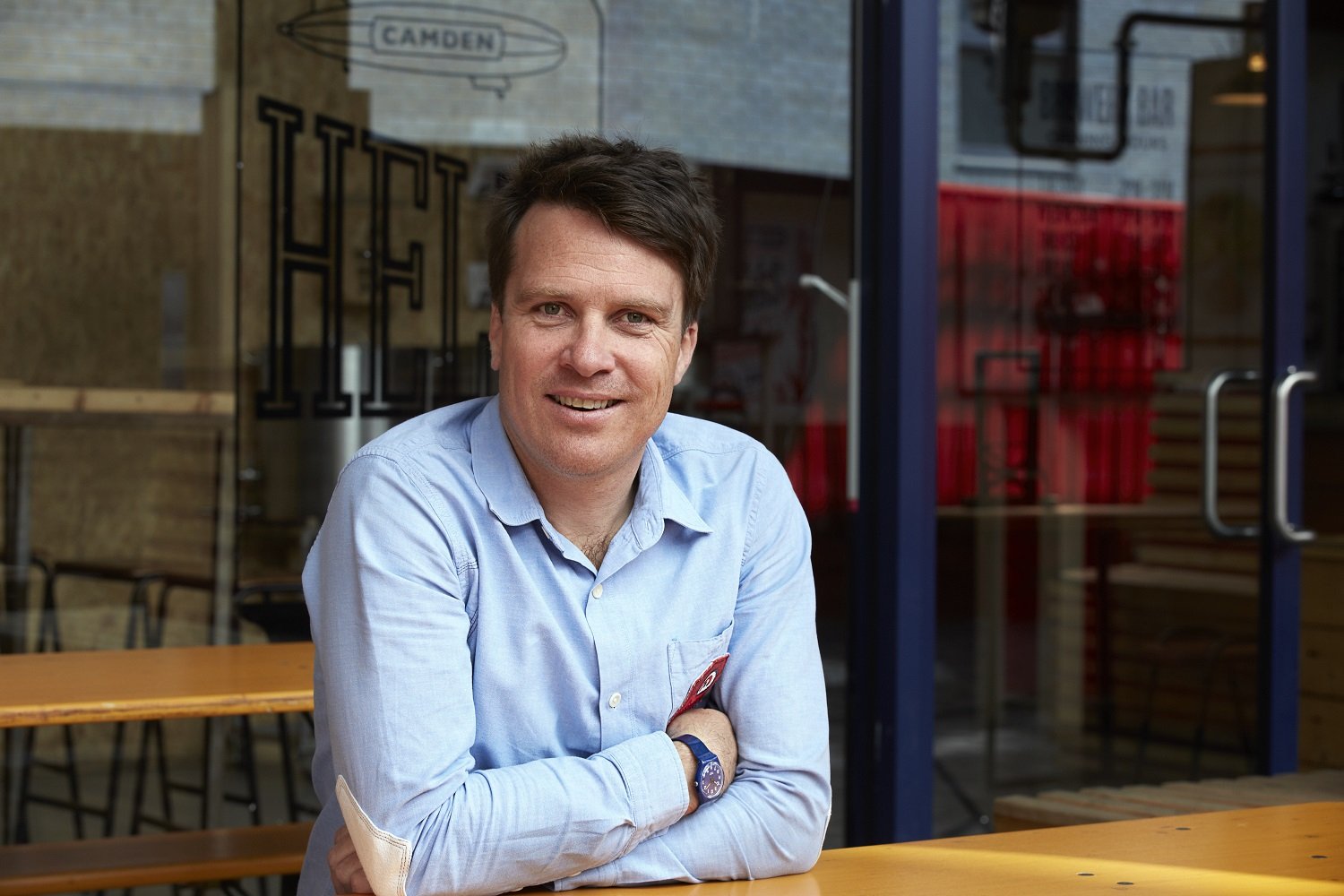 The story of Camden Town Brewery. And what’s next?

The new boozer Camden's Daughter opens on Kentish Town Road next week. We meet the man behind NW5's famous export

Jasper Cuppaidge had plenty to celebrate as he reached his big 4-0 the other week. Why? Because it almost coincided with the launch of his third north London venue, Camden’s Daughter, about to open in the former O’Reilly’s on Kentish Town Road. In fact, the date is now next week: a hopefully lucky Friday 13th November.

Not that it hasn’t been a pretty big year already: there was the successful crowdfunding Hells Raiser campaign back in the spring, and the fifth birthday of the brewery itself in July, which saw 700 locals crammed into Wilkin Street Mews for streetfood and lashings of beer.

But did you know that the Camden Town Brewery story actually goes back to the 19th century, when Cuppaidge’s maternal ancestors started what became McLaughlin’s Brewery in their native Australia? And then from 1910 Laurie McLaughlin, Jasper’s grandfather, went on to run McLaughlin’s Brewery (or Mac’s) for a half-century. When he died, his daughter, Patricia (Jasper’s mother) inherited the brewery and pub estate – but too young, she sold it to big Oz brewers Carlton & United.

“Maybe it spurred me on, with beer as part of my DNA,” he says. “But it wasn’t like I’d been surrounded by it all my life; it was more of an internal thing. And my family history definitely got me over any questions of “why I am doing this?”

Fast forward to 1995. Jasper had left Australia to surf around the world and – having already ‘done’ America – was on his way to Africa. He missed his flight, and ended up getting a job at The Westbourne in Notting Hill at “the start of the pub revolution” as glass collector and ashtray cleaner.

Over the next decade he did the rounds in hospitality, first at the St John’s Tavern in Archway, then Century in Soho and finally, with the help of investors, buying the Horseshoe in Hampstead, going for “peanuts” in 2006.

“My wife’s family live in Highgate,” he says, “and, driving back via Heath Street to Camden one Sunday night, there was a “for sale” sign. I always wanted to be my own boss, so ripped it off the wall and rang up next morning to put a bid in. It took an age but eventually we got it, free of tithe, then renovated it.”

And happily, the chef won great reviews from national critics straight away. But it was the “wet” sales that Jasper wanted to improve. “Back then the native beer offering sucked – we imported American and European varieties but none from the UK. The local industry was flat, with no drive, ruled by CAMRA rather than creativity.”

So he tried recreating his grandad’s beer in the cellar of the pub. “My mum was quite overwhelmed when I started brewing – and we were going to be called Mac’s after her father, but it was trademarked. And that’s how we realised that the name Camden Town Brewery was going.”

His idea? To keep to tradition, make great beer but brand it in a way that’s “more identifiable; what the new London consumer would want.” The castle icon in the logo was chosen to reference the “four castles” in Camden – Edinboro, Pembroke, Dublin and Windsor, one for each nation to appease brawling navvies in the 19th century.

3. The Birth of Hells

“We started making beer in the basement, then gave it to friends, and then it got to the point where we didn’t have enough room and so had to look for premises,” he says. “I was living in Camden Square and would walk up Prince Of Wales Road to work and, seeing them renovating the arches, asked if I could get one. It was 2008, the beginning of the recession, and nobody wanted to touch them, so they were giving them away. We ended up taking three arches and I had to mortgage everything up to the eyeballs, although some good friends also invested in us. In my wildest dreams I never would have thought it would be so successful.”

The first pint of Hells – its name a collaboration of two different styles of beers chucked into one – was pulled in September 2010. “I always wanted to make lager but our equipment at the Horseshoe wasn’t good enough to make it consistent. We weren’t interested in cask beer – already made beautifully by regional brewers – so decided to make lager much better. Why couldn’t a UK brewer make great lager, we thought?”

Five years later, Camden Town Brewery is selling a quarter of a million pints a week across 300-400 London venues with taps – and the same again selling bottles and cans. And Jasper wasn’t the only Londoner with a beery masterplan: there are now 75 breweries within the M25 – compared to just fourteen back in 2010.

1. Make sure you know your focus “All the big breweries in the world are famous for one beer alone.”

3. Make beer for yourself
“Never brew for a market; if you’re happy and proud then you can sell it easily, too.

So what’s next? In early 2015 the brewery decided to try a “Hells Raiser” crowdfunding campaign to fund expansion to larger premises. “We raised three million quid, and then a large investor came in with a further ten million,” Jasper says, with a smile. “At the moment 50% of production is in Belgium; that will only have to grow until the new brewery opens in Enfield next September. The hope is to get bigger but always stay close to Camden.”

And he has big plans for the original Brewery bar on Wilkin Street Mews. “Next autumn it’ll close for six weeks and reopen bigger and better. We’ll remove the outside tanks so the emphasis can be on the tours and people coming down to brew a beer. There’ll be a meeting room for hire, a bar in the middle of room, a permanent outside kitchen for traders, and the arch next door will be converted to expand our surface area. We want to return to more tastings and educating punters, which was the point in the first place. And yes, don’t worry, we’ll have a much more improved toilets system!”

What of the former O’Reillys on Kentish Town Road? The brand new Camden’s Daughter is the latest in a long line of notable alehouses which have stood on the same site over the centuries. Originally known as the Star & Garter, it was rebuilt in the late 19th century with a striking Victorian red brick exterior, enjoying a century-long reign as The Old Farm House before being renamed O’Reilly’s in 2001 (with a short stint in the 1990s as Dolly Fossetts).

The exterior now is all elegant blues and reds, and inside the high ornate ceilings, dark wooden panels, and wonderful leaded windows remain. Cuppaidge has ensured any interesting details have been kept, including the back bar, mirror and clock. “We want it to be an added jewel to the high street,” he says. But for ages he couldn’t make up his mind on the name. “The Old Farm House didn’t feel right, and neither did the Star & Garter.”

The eventual name was prompted by the “idea of a ‘child’ of the brewery,” he says. “It’s also inspired by my own daughters. Girls often collect and archive things so if this new ‘child’ would be telling the story of the brewery it would naturally be a daughter. Another coincidence is that the new manager has the same name as one of my own girls, too.”

Where the toilets were, an open kitchen will be installed in similar fashion to that at the Horseshoe. And the food? “A simple, healthy fast food offer inspired by all streetfood we’ve had at the brewery,” he says, “with an emphasis on kebabs. It’s an English interpretation of Middle Eastern cuisine, so salads, and meze will be the focus.” In fact, we tried a lamb shawarma last weekend when they were being roadtested at the Brewery Bar and it was meaty, spicy and surprisingly filling.

There’ll also be takeaway and “a window serving great coffee all day, and a turntable. There are a lot of students in area so we want them to feel that it’s a cool place to come and hang out for a cheap eat and good beer. Sadly there’s no outside space, although we’ll have foldaway seats outside and awnings.”

The upstairs will house a staff office and bedrooms, and eventually a dining room once the new brewery opens and it all shifts around again. “The whole building has to work as rents are so high these days,” he says, with the face of someone who knows by hard experience.

Not something, perhaps, that his grandfather had to contend with. But a small price to pay for one of NW5’s biggest exports.