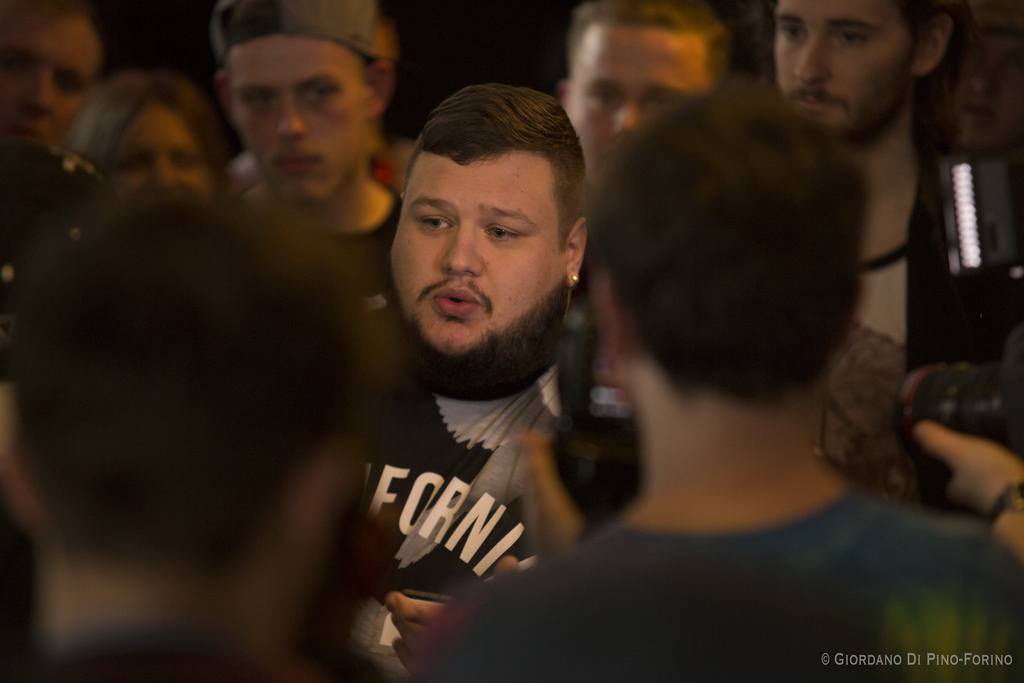 Have you ever seen that film 8 Mile? The one about Eminem in Detroit? That happens here too. In Kentish Town. Seriously.

Welcome to the world of modern battle rap. A scene that has gone from strength to strength in recent years with help from viral battles such as that between Mark Grist and Blizzard which you may know as “teacher rap battles his student”.

If you’re not familiar with the concept, then let me explain: hundreds (sometimes thousands) of people back into a room to watch two men (or women) verbally attack each other through jokes, clever wordplay or rhymes about their opponent’s life, or all three.

This is the scene I was presented with at Malden Road pub the Fiddler’s Elbow: dozens of like-minded people, along with a few intrigued passers-by, were packed into one of the postcode’s favourite front rooms for a day of free entertainment.

Now this may sound like quite a strange idea to some of you, so I asked Don’t Flop’s head of stewarding, K, why a newcomer would enjoy this if they’ve never watched it before.

“I just think that it’s such a wide field, it’s not just hip-hop, but if you have any interest in hip-hop, poetry, English or comedy then I could recommend a battle to start you off, there’s something for everyone.”

From personal experience I couldn’t help but agree with K. I’ve been following the culture since 2009-10 and in the process I’ve built up a bank of replayed battles ranging from the funniest to the most disrespectful to the best for lyricism.

The culture is a lot more diverse than you’d imagine when you just hear “battle rap”: for example the current 2-on-2 champions of Britain, one of the best double partnerships in the world, are a preppy middle class duo from Berkshire, Shuffle T and Marlo, both successful battlers in their own right but unbeaten together. These posh boys took this world by storm with their combination of intricate writing and witty comedy woven in between a carefully crafted deconstruction of their opponents.

I arrived at last weekend’s Training Days event alone but didn’t feel as such at any point in the day. Speaking to fellow enthusiast Adam he told me that he often comes to events alone because “everyone is safe here, we’re all here for the same thing and share a common interest”. This was evident throughout the day as strangers bought each other drinks during debates over the greatest battles ever, future battles and of course who is the greatest of all time?

The event went off without a hitch, the battles went smoothly, nobody suffered the ignominy of a choke (forgetting your lines, unless stated otherwise no battles are freestyled anymore) and the crowd were on form with their reception.

After the event I asked Don’t Flop founder and battle rap legend Rowan Faife, more commonly known as Eurgh, how he got into it.

“I just discovered it by accident, just randomly stumbled upon a Pro Green battle and it went from there really,” he says. “It has its highs and lows this work but I find it thoroughly satisfying doing what I do.

“It’s also a great way to get people to experience the culture and introduce them. You’ll find this is a day when a lot of people bring their mates, because understandably it’d be a bit harder to convince your mate to take a chance on a £10 Write Club event or a £50 ticket to Ministry of Sound.”

So if you’ve never watched battle rap before then why not give it a go? I’d recommend checking out one of the funnier ones on youtube like Shuffle T and Marlo’s “compliments match” versus Big J and Lefty (see the clip above) where the two teams do their best to lyrically compliment each other. I hope you enjoy.

This is box title
Don’t Flop have regular nights at the Fiddler’s. Follow @fiddlerscamden for more info. A 7th birthday event is at Ministry of Sound on the 14th-15th November. More info on Twitter @dontflop