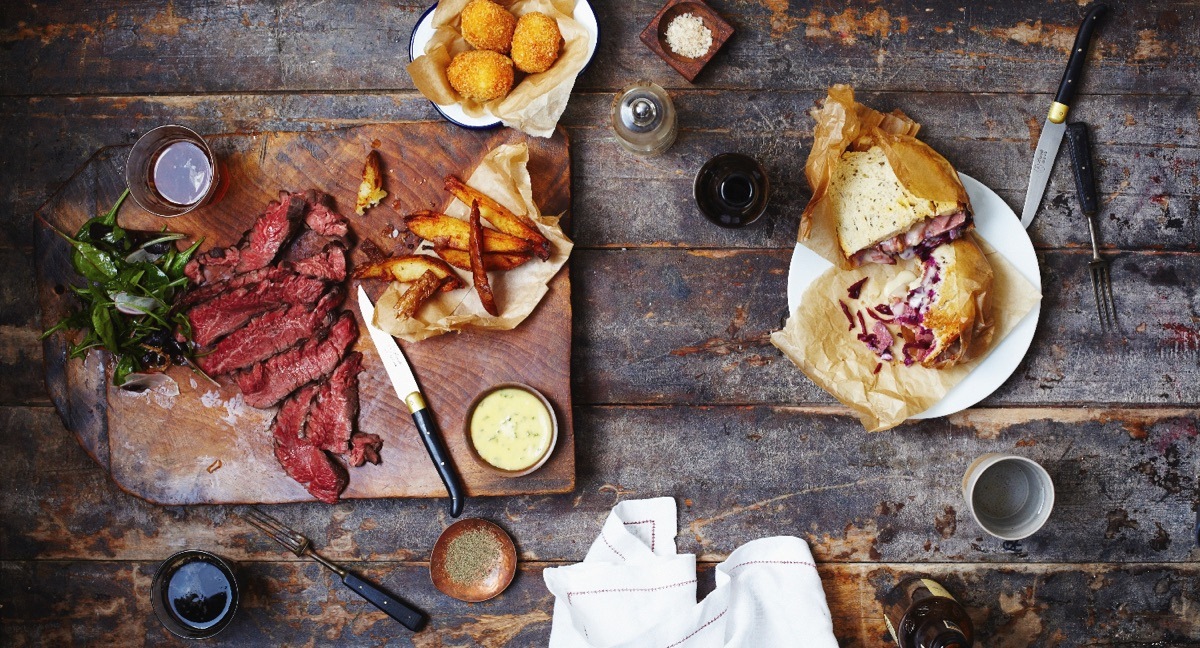 What would former Pane Vino owner Stefania make of the new interior at Beef & Brew? That was our first thought entering its minimal dining room.

Unlike the old-school Sardinian restaurant and one-time favourite of Giles Coren, Beef & Brew is firmly contemporary in its aim to be a “quality, casual steak restaurant,” its focus simply provenance and good-value cuts.

On the menu there is also short rib braised with stout and treacle gravy, plus a smattering of chicken and beetroot veggie options. Oh, and cauliflower cheese croquettes, ducks’ hearts and aubergine chips as sides, too.

It’s the brainchild of chef Jessica Simmons and Daniel Nathan. Simmons has worked for Angela Hartnett at both Murano and the Whitechapel Gallery Dining Room. “Jess and I share a love of unpretentious food,” says Dan, “and Beef & Brew hopes to reflect that with a classically trained chef, dedicating herself to the simple and indulgent.”

Jess also set up the kitchen at London Fields Brewery, so naturally enjoys adding beer to her recipes; hence craft brews provide the drinks focus of the new menu, with beer and food matching ideas, and some beery cocktails too.

On our first visit we sat at the window counter early doors on a Tuesday night, to ponder the rush and noise of the Kentish Town Road. Our print deadlines meant that it was the tail end of the week of “soft launch”, so we were, of course, prepared to be lenient.

The interior is now purely functional, the old restaurant ripped out and replaced with sharing tables, hard seats and pendant lighting. An inevitable diagram of a cow lines one wall, a kitsch ‘let them eat steak’ poster another.

We chose an onglet and a flat iron, the two cuts currently on offer, and asked them to be served as the chef fancied. They were rested correctly and both pink – the onglet more so – and exceptionally tasty, especially when the flesh was dunked into dips of creamy truffle béarnaise and chimi churri, the moreish green sauce of chopped parsley and garlic. A small point is that the ends of each cut had turned grey by the time the plates had reached the table.

Chips? Fantastic: chunky yet crispy, light and fluffy inside, they’re “salt-baked” – as if we need that in our lives. A side of “daily greens” was in fact just slightly ordinary broccoli, yet it yielded a pleasingly chargrilled edge.

We would always, always guzzle red wine with steak, but plumped for the tasting flight of three beers: they arrived all together, so we sent two back to the fridge to keep cool while necking the first, Beavertown’s now-ubiquitous Neck Oil. A very zingy Epic Saison from Somerset’s Wild Beer Co was up next, followed by Harviestoun’s whopping 8% ABV Ola Dubh, the first ale ever to be matured in whisky barrels. Its smoky taste won’t suit everyone, but it does work well with beef (just not as well as vino).

It was a relief to see that, a week later, when we returned after the restaurant was fully up and running, both steaks (we ordered the same cuts and sauces) were flawlessly served; rosy right through, in fact. A green salad with walnuts was seasoned and dressed carefully. And this time we washed it all down with a lively bottle of Primitivo, the underrated Italian red.

It’s a crowded market to compete with this kind of casual steak thing, but I hope this pair will succeed. If I was trying to court the repeat come-weekly neighbourhood crowd, I might consider warming the décor up a bit – dimming the lighting, a candle here and there – but as a useful spot to devour great beef at decent prices (for London) it works. Service is as pared-down as the interior, with less of the bonhomie we’ve experienced at, say, Patron.

But no matter. “London is full of good steak restaurants,” says Dan , “but not many that are affordable.” And right now I think we’d second that.

All new Kentishtowner restaurant reviews are paid for and anonymous. More on this policy here