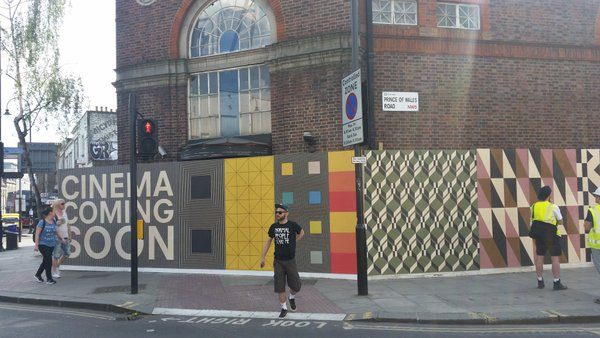 So the good news is that – over forty years after the last picturehouse closed down in the area – Kentish Town is having its own cinema again.

It’s been an involved and quite frankly dull tale of exchanging contracts and tedious licensing applications (even we’ve zoned out) but the happy upshot is that the building owners have now sold the cinema part to another company, Uplift, who are overseeing its development. Yay.

They’re a team of London-based designers, architects and builders who are, says founder Kam Sagar, “passionate” “about design and period buildings that have an interesting story. “When we came across the former polytechnic building and found out about its history and how much it’s loved locally, we knew we had to be involved in the project,” he says. “We purchased the property in June 2015.”

Since its use as a poly, the 1920s landmark served a long stint as a Pizza Express – and more recently, was squatted and held some pretty interesting alternative gatherings to boot.

We understand they’re keeping the Allies & Morrison original plan (see image above). But what can you lot expect? “A 70-seater cinema with a café and bar,” says Kam succinctly. Which is surely a good thing (although who else hates the relentless crunch and schlurp of cheese-topped nachos?)

And who will run the joint? I mean, that’s what we all really want to know, right? “We’d love for an independent chain to operate the cinema and associated facilities,” says Kam, who clearly isn’t giving much away at this stage.

As regular readers will know, the most interested party was originally hip Bermondsey picture-house Shortwave. But we now understand that they’re out of the, er, picture – and the site is up for grabs.

Whoever the operator, NW5 will finally have its own cinema once more in the coming autumn. “We look forward to opening the doors later this year,” Sagar says.

This is box title
See our complete timeline of the battle for a cinema here. Read about the new Everyman in King’s Cross here. And did you know a new documentary cinema has opened in Bloomsbury?