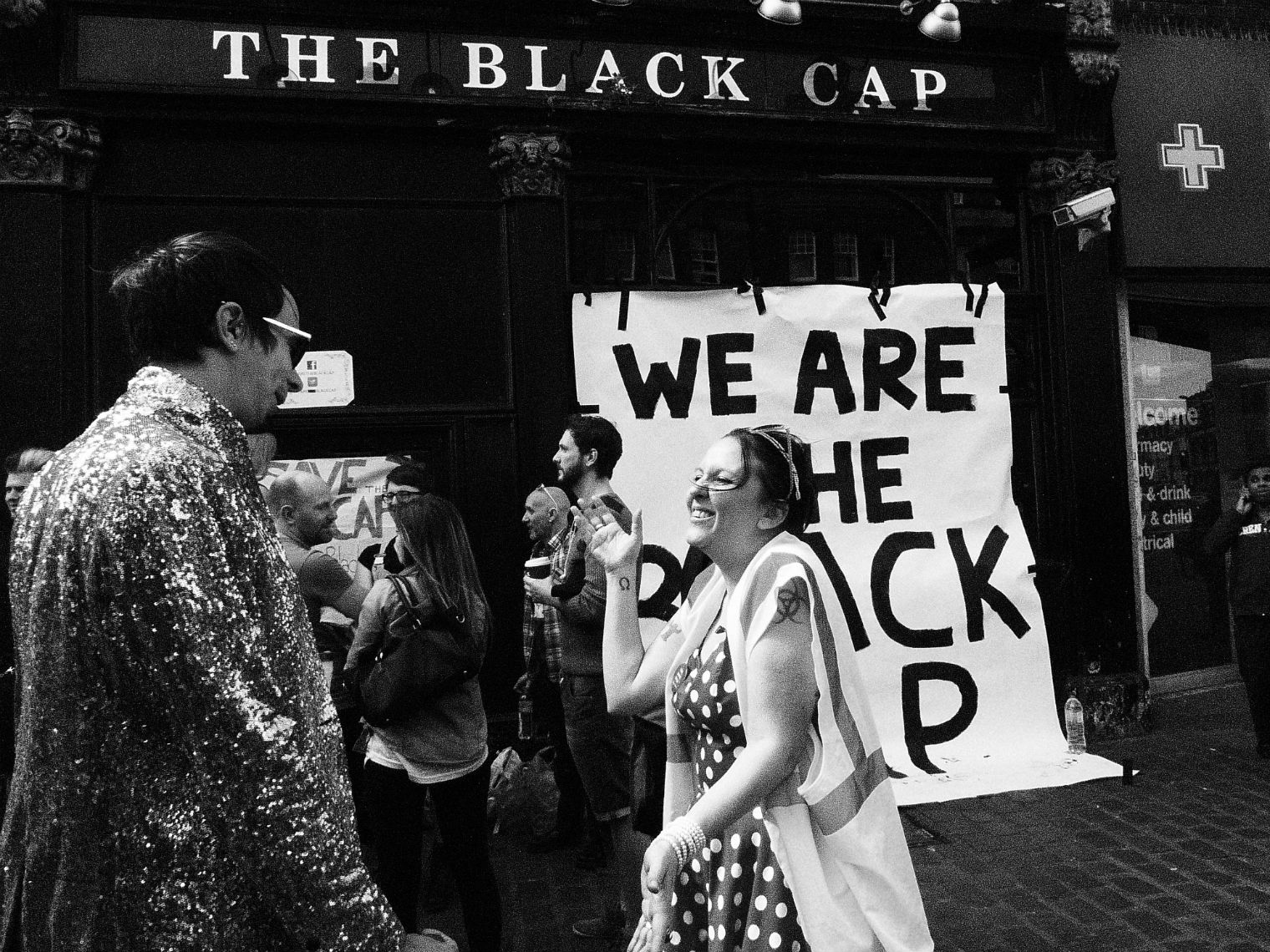 The story of burlesque at the Black Cap

In an exclusive extract from a new book, Curious Camden Town, authors Martin Plaut and Andrew Whitehead look at the legacy of the seminal gay bar

This was a demonstration that had it all: noisy, boisterous – with not a hint of funereal gloom. The Black Cap, Camden’s premier gay bar, had closed on 12th April 2015. Drag queens, patrons, activists and local well-wishers came together outside the pub to protest against the decision to bring this iconic venue to an end. The owners, Faucet Inns, plan to transform it into flats.

Meth, one of the performers at the bar, said the staff had been told on a Friday that it was closing on Sunday. “We had a gagging order slapped on us by the company – with threats that staff would not be able to find jobs if we went public. They told us not to tell people; we told as many people as we could to make sure we still had a fair amount of people to say goodbye to her on Sunday.”

“It was where I grew up, where I learnt my trade,” said John Moore (stage name Mrs Moore). “It has a great history. In August 2013 we celebrated fifty years of the Black Cap as a gay venue. It always had real people in it – it was never pretentious!”

The pub itself can trace its roots back much further. A list of inns in Camden from about 1830 includes the ‘Mother Black Cap,’ and it may date from even earlier. High on the frontage is a bust of a rather prim looking woman which is said to be a representation of a 17th century witch, which gave the pub its name. But by the 1960s it had become a gay meeting place and gradually gained a reputation for drag.

Find out more about video ads for your business
Among the earliest performers was Mrs Shufflewick, aka Rex Jameson. Night after night she would appear, a tipsy cockney woman settled in the snug of her local pub, The Cock & Comfort: ‘A lot of comfort, but not much of anything else.’ Mrs Shufflewick drank her port and lemon, seated primly in her flowery hat and shabby fur stole, with her ‘genuine untouched pussy’, as an obituary put it.

Rex Jameson learnt his trade when he was called up for war service in 1942. He joined the RAF Gang Show, which starred comedians Peter Sellers, Frankie Howerd and Spike Milligan. Rex really came into his own after the war, performing on television and at Blackpool’s Winter Gardens. But the Black Cap became his performing home and it was after a show here that he died in 1983.

Father Bernard Lynch, who today chairs the Camden LGBT Forum, remembers arriving from New York in 1992 and walking into the Black Cap. “It was outrageous,” he recalls. “I had seen nothing like it before.” But it was an easy place to make friends. Among those he met was Reginald Bundy – the drag queen Regina Fong – who titled herself: ‘Her Imperial Highness: The last of the Romanovs’. Lynch, a Catholic priest, presided at Bundy’s funeral.

The pub became known as the Palladium of drag. Danny La Rue and Hinge and Bracket started their careers here. “These men were our revolutionaries,” says Lynch. “They were always out there, to be laughed with and to be laughed at.”

The Black Cap also served an important function. “It was a place of sanctuary – and an important one, right to the end,” says Lynch. “People knew they would be defended if they were attacked – which still happens.”

But – says Moore – the pub also had a darker edge. “The serial killer, Dennis Nilsen, picked up some of his victims here. People remembered.” Carl Stottor, a 21-year-old who met Nilsen in the Black Cap, was one of at least twelve men murdered at Nilsen’s home on Cranley Gardens by the man dubbed in the press as ‘the Muswell Hill murderer’.

In recent years the venue suffered a slow, but gradual decline. “The gay lifestyle became normalised, and people became integrated into London life,” Lynch reflects. “Audiences dwindled. Fifteen years ago it was busy seven nights a week, open until 2 am.” By the end it was really only full at weekends.

John Moore sees the Black Cap’s fate differently. “There was no investment. The toilets were in a shocking state. Even bulbs to light the stage were not replaced.” He believes it was a deliberate strategy to run down the venue.

“I doubt it will re-open. But power to the people!” says John, more in hope than expectation.

Since we met the pub has had its status as an ‘Asset of Community Value’ upheld. But the landlords might still appeal. Will the Black Cap return to its former glory? No one can be certain.

This is an extract from Curious Camden Town by Martin Plaut and Andrew Whitehead, published by Five Leaves Publications next month.