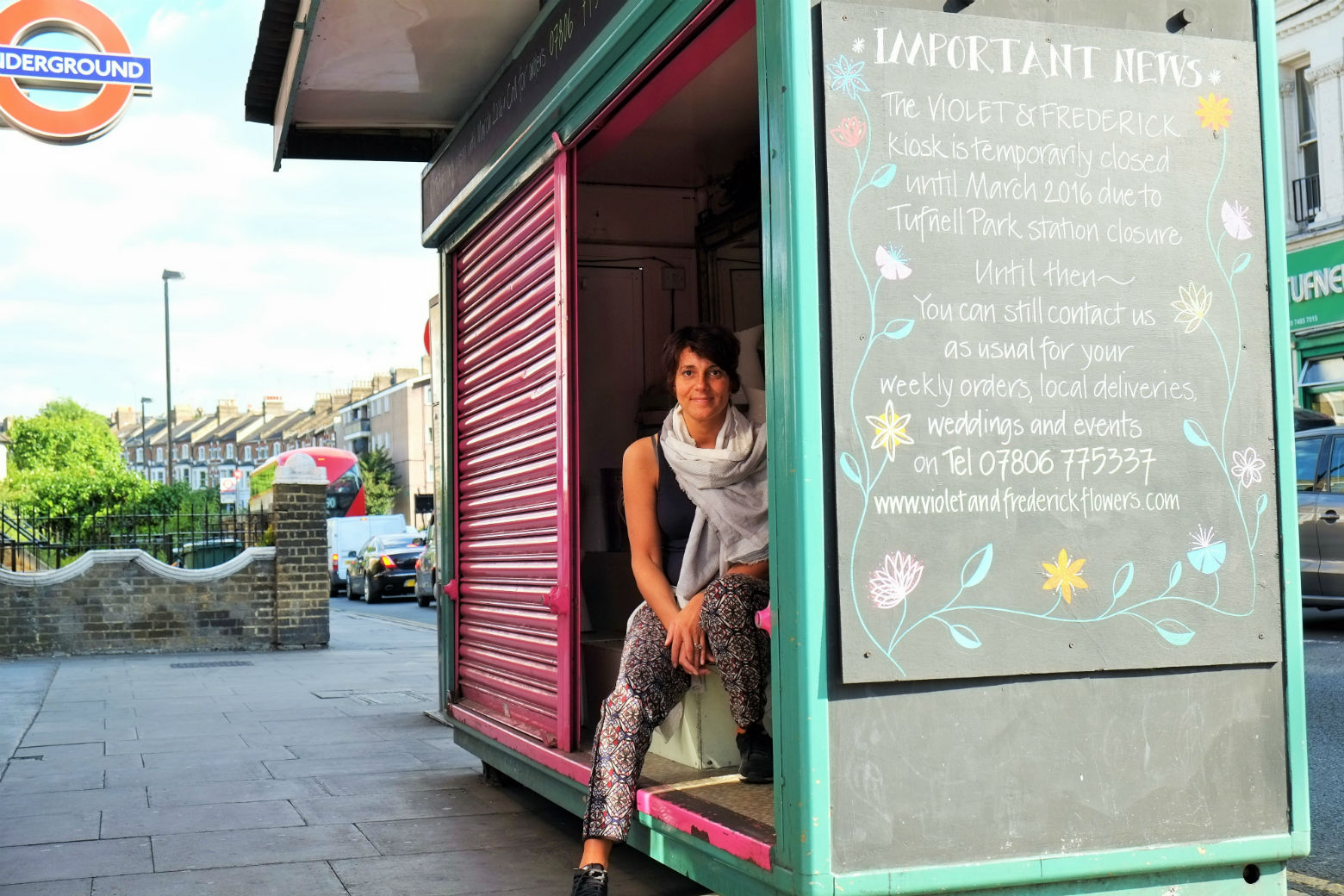 In the first of a new series, Sarah Park meets a woman who's been cheering up commuters at Tufnell Park tube with her bright kiosk for the past few years. A shame then that it’s now closed till 2016

Do commuters make good customers?
I see a lot of weary people coming out of the tube and some do look a bit fed up, but I’m told the warm air blowing around the station carries the faint floral aroma and they like to be welcomed by the brightness of colour. So I get a lot of smiles and it’s good to think I may have cheered them up from their journey. When I heard about the closure of Tufnell Park station, I started a petition and lobbied TFL to find another solution, but I understand the safety issues. I do miss the commuters though.

Weren’t you supposed to be a revolutionary?
I grew up in Islington and my father was very politically active in the left wing movement in the 1960s. He named me after a revolutionary but I don’t know if he expected me to be one. Most people called Pushkin today seem to be cats.

So why flowers?
I have a love of English gardens, not manicured so much, but the natural unkempt ones. My grandmother had a cottage and was a keen gardener, as was my mother. My flowers are natural and the type you would find in a rural environment. I love using these to create pieces for people to enjoy in their homes.

What brought you to Tufnell Park tube?
After a year assisting at my first florist I decided to go it alone. I’ve been in Tufnell Park since 1979 and know the area. When the newspaper stand man closed his kiosk I requested to lease it and use it to promote my business. But then I fell in love with the retail side and the commuters. That was four years ago.

Do people tell you why they are buying blooms?
People feel good choosing flowers and so it creates conversation. They tell me about who they are giving them to and I try to detect their personality to advise them. Whether they are bright and gregarious or reserved and thoughtful helps me choose. Many people buy them on a Friday evening to cheer themselves up at the end of a hard week.

Is it true men buy flowers because they feel guilty?
If that’s the case, they certainly don’t tell me. But lots of guys in Tufnell Park pick them up regularly for their partners on their way home. Men really like flowers for themselves, and also they tend to buy them for people they are meeting, far more than women do.

Do flowers follow trends?
Definitely. The current summer trends are for peonies, cornflowers, delphinium and foxgloves. An on-going trend in interior design is natural-looking homes and people want to align with that style. The natural flower is also overtaking formal bouquets at weddings.

What is the worst part of what you do?
The cold. Customers only ever see the end product and think my work is all creative and pretty. but it is labour intensive; there’s lots of manual exertion and the lugging about of vases, water and bunches of stems. They have got to be kept cold – which means I spend most of my time cold too.

Where are you located now Tufnell Park tube is closed?
I will be setting up a stall at interior design shop Future and Found on Brecknock Road (opposite the tube) on Fridays and Saturdays from mid-July. I’m also freelancing and while I miss the footfall of the tube, I still have a few of my regulars.

What do you display in your home?
It depends on the season; this summer it’s peonies; in autumn I’lll have dahlia and autumn berries; in winter I might have holly and eucalyptus. In spring I fill my home with ranunculus and anemone.

How can I stop killing my flowers so quickly?
A lot of people beat themselves up about this but sometimes the bunches they buy have not been well cared for. No matter what you do, they will die quickly. But don’t put them in direct sunlight or have them too warm. If they have woody stems, cut them. And importantly, change the water regularly. People don’t realise the water needs to be fresh.

The Violet and Frederick kiosk is closed until 2016 due to works, so contact them at Future And Found (225a Brecknock Road N19) on Fridays and Saturdays or here