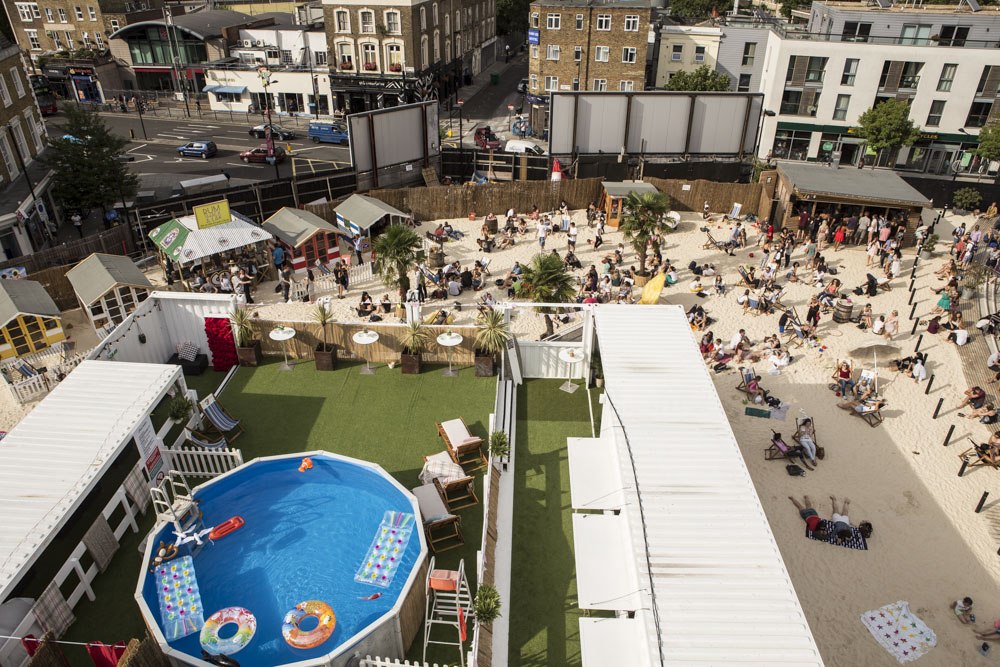 Now that the weather has finally warmed up (we hope), you can’t beat the gentle sun-bathing slopes around the various swimming ponds on Hampstead Heath: that much is true. But where to chuck a towel if you fancy somewhere a bit more, well, urban?

First off, a newbie for 2015: from next weekend the piazza at the JW3 centre on Finchley Road will be transformed into a summer beach with 35 tons of “self-cleaning” sand. There’ll be cocktails, deckchairs, games, music and an in-built water feature to splash about in. In-house restaurant and bar Zest will serve special dishes from a beach hut and grill: fish burgers, harissa, corn on the cob with spicy nuts, non-alcoholic limonanas (341-351 Finchley Road NW3).

Quirky evening happenings to accompany your pina colada include a concert of covers from the North London Ukulele Collective (9th August), Drink, Doodle and Draw (19th July), and Tu B’Av, the Jewish Festival of Love (30 July), featuring live music from singer and accordionist Garance Louis. Tons of kiddie-friendly family events, too, all summer.

Next up? Why another new NW arrival over at Brent Cross shopping centre. Yes, really. This one reckons it’s the capital’s biggest ever urban beach, with a whopping 250 tonnes of sand, 100 palm trees, oversized deckchairs and a fairground including 60 ft roller coaster. Wowsers. There’s the usual range of “coastal” edibles, too, such as fish and chips, ice cream stalls and a Pimm’s bar – plus views over the lovely North Circular at no extra charge.

Find out more about video ads for your business
But the playa that we reckon most readers will be most excited about is – of course – Camden’s big party beach, back for a fourth outing. From 17th July for six weeks the Roundhouse again pulls out all the stops for what has quickly become a seasonal institution in the neighbourhood. Tasty pop-up restaurants (including the ace Fishy Business), more bars than you can shake a straw at – a good thing, if waits last year were anything to go by – plus deckchairs, beach huts, and ping pong. Just avoid the urge to show off your speedos.

Swanky types can bling it up in a private beach hut, too, fully “pimped-out” for 2015: holding eight people (not quite a snip at £250+ a day) that at least guarantees queue jump entry, comfy seating, bottles of prosecco, beer, popcorn and a fish and chip supper for the whole group. Not to mention a posh app ordering and waiter service.

And if that’s not glamorous enough (for goodness’ sake!), bigger groups can hire the “rooftop gardens” which offer views over the resort as well as loungers, armchairs, a sound system and even a hot tub.

Then again, maybe the tranquillity of the Heath will win out, after all.