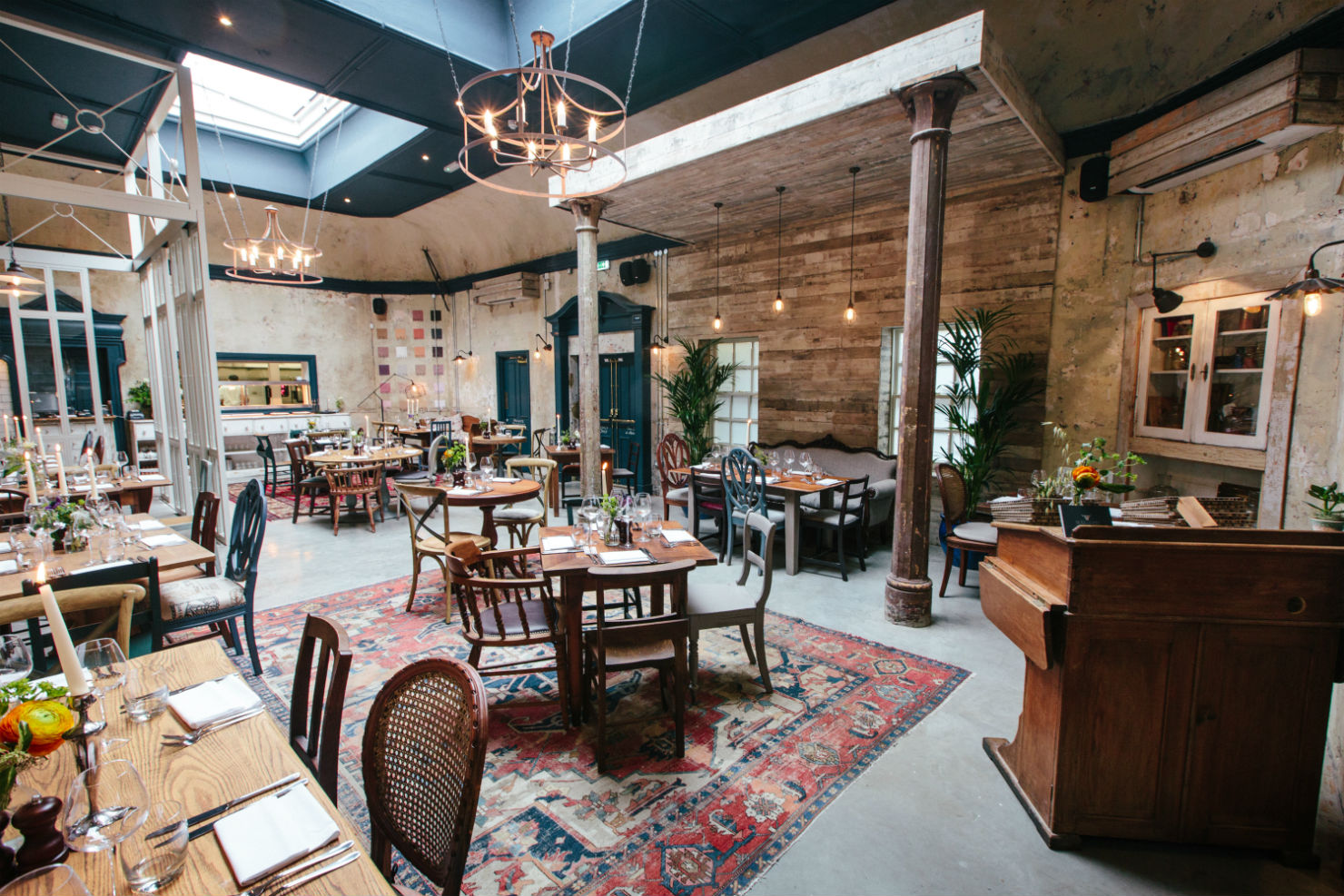 Although it opened back in April, it’s taken this long to publish a review because, for a while, we simply couldn’t get a table. On each attempt – admittedly weekend evenings – the restaurant was full. The staff are always polite, but it seems walk-ins are not entirely encouraged; there’s the accompanying pub for a casual meal, of course. But we were nonetheless keen to try the grown-up menu.

With our policy of paying for meals, reviewing anonymously and not pre-booking, we instead decide to pop by on a Tuesday night, unannounced. Result: we slip quietly in.

Arriving at 7pm, the room is almost fully booked for the evening, but a table is available near the open kitchen: not too bad on a fairly temperate evening, but potentially sweltering on a balmy one.

The menu reads beautifully. We’ve eaten at pubs owned by Young’s across north London, and while the food has, in some cases, been notable, it can often fall into rather basic gastropub territory.

But with this latest venture, it seems they have their eyes on a similarly named bovine boozer up the road. The evidence? Ingredients like celeriac, bone marrow and kohlrabi; lots of smoked meats and fish, but not the more traditional salmon (that’s treacle-cured, silly); and an emphasis on cheap, fashionable cuts like shoulder and pork cheek.

But have the owners hired a chef who knows what he’s doing? Well, the lucky bugger is one Luca Mattia, from Naples, with sixteen years’ experience in both Michelin-starred restaurants like Zafferano in Knightsbridge (when it was under the helm of Giorgio Locatelli), as well as the Soho House group.

Without ruining the surprise, it turns out we are in safe hands. On this visit, three of us share some starters, refreshingly not called ‘small plates’ here.

First, let’s dispense with the least impressive: a rare fillet of beef is a little too cold, but its on-trend raw salad of thinly sliced pickled carrot and beetroot works nicely. Better is smoked octopus (above), piled on ribbons of courgette and basil puree, sweetened further with wonderfully creamy almond butter.

And better still? A trio of duck (see above main pic), which screams “technique” in both its attractive presentation and layers of taste. A swish of shallot puree is topped with smoked breast, rillettes and a croquette. There are hits of coriander, fennel and cumin, and something you might call “skin crumble”. Scything through it all are pickled beetroots and black cherries stewed in kirsch. Wow.

Portion sizing is good, by the way; no need to struggle through outsize plates here. So, aided by the house red – a light Carignan (£17) – we devour an assortment of mains. A smoked lamb shoulder shepherd’s pie arrives just too piping hot to eat for several agonizing minutes. Yet once it’s cooled, it yields the hoped-for meaty depth of flavour, lacking only in the billed burnt leek. An abundance of mash is less creamy and under-seasoned than expected, but compensating is a pile of purple-sprouting broccoli, moreishly chargrilled.

Black Angus sirloin is served correctly medium-rare, with a creamy béarnaise that’s easy on the tarragon, but the chips are less fries, more wedges, thick-cut and a little soggy. We enjoy the sticky-sweet roasted halves of banana shallots, though, but overall it’s not quite up there with the steaks at either Patron, over the road, or the more pricey Bull & Last.

Best of all? Firm, sweet, white hake with a crust of seasonal wild garlic, perched on braised little gems in a clear savoury broth. Light, clean and packed with spring-like touches – including peas and shallots – this is the dish to return for.

• Service can veer into over-zealous territory, but that’s natural for a new opening, right?[/column]
[column size=”1/2″]• We hope they hold some tables in the restaurant back for a walk-ins even on busy nights as it’s a local joint.

• The Sunday roasts have proved a hit with readers too, at least according to feedback on social media. [/column]
[/row]

Which is what we do a few days later, just to check that the hake really is as fine as all that. And yes, again it shines just as brightly (although, if we’re to be pedants, the shallots are more astringent).

This time we also try broad beans, ricotta and heritage tomatoes on sourdough: it’s a filling starter, with a pleasing hit of lovage, but served fridge-cold.

Unlike on our previous visit, we have some room for dessert, but as an intriguing rosemary focaccia bread and butter pudding is sold out, we settle for a decent (if a tad more perfunctory) salted dark chocolate torte.

So, the verdict? This should make for a very fine restaurant – rather than gastropub – once the team are well and truly in their stride. And if the upscale menu sounds a little too much for some palates, the main bar itself is a more straightforward posh burger-and-chips option, especially if you’re about to catch a band at The Forum next door.

Find the Bull & Gate at 389 Kentish Town Road NW5. Look out for a review of the Boulogne Bar soon.

All Kentishtowner restaurant reviews are paid for. More on this policy here