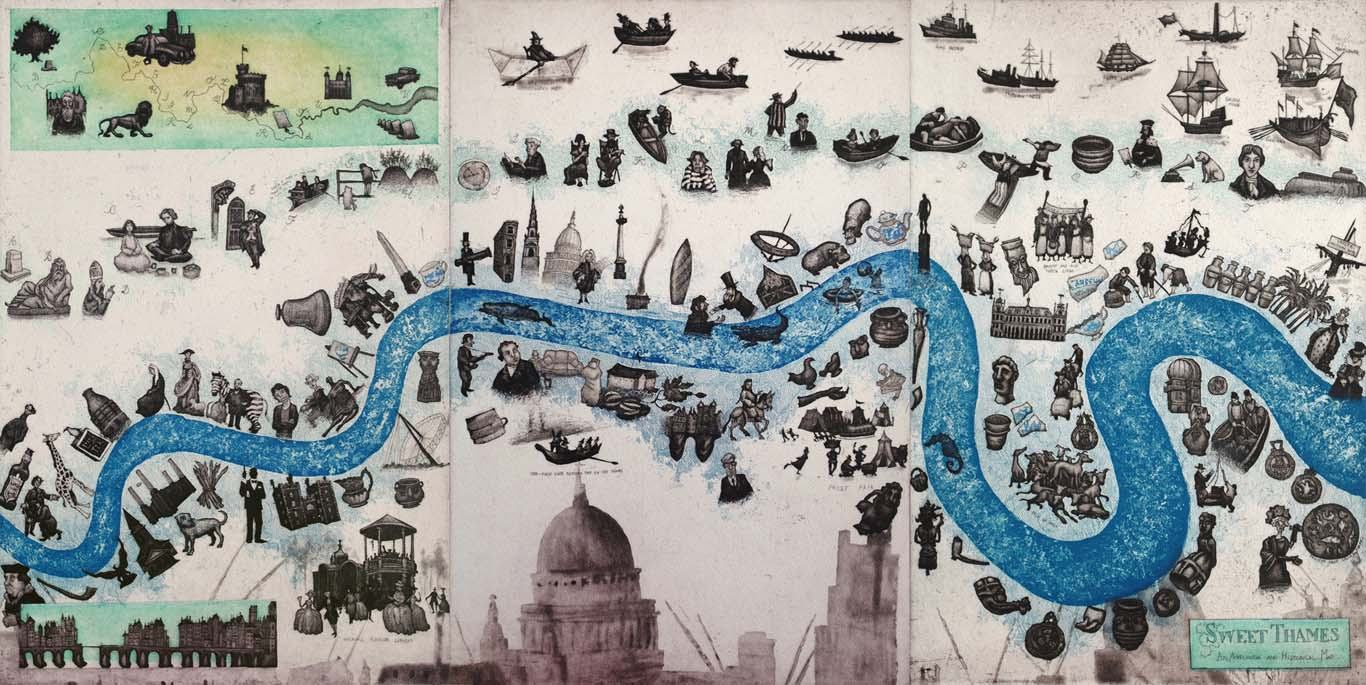 Mychael Barratt is a painter, printmaker and would-be cartographer whose detailed work is often as narrative as it is visual. He is the President of the Royal Society of Painter Printmakers and was the commissioned artist for the Globe Theatre throughout Mark Rylance’s reign as Artistic Director. His book, Intaglio Printmaking, was published by A & C Black and his next, The Master’s Muse – Artists’ Cats and Dogs, will be published by Unicorn Press in 2015. In 2011 he was commissioned by a law firm to paint a large-scale mural on the Mile End Road along the route of the 2012 Olympics. Mychael will be showing work and running a print workshop at The Affordable Art Fair Hampstead, 11th-14th June.

When were you happiest?
In the company of my family. Artistically, however, it would be hard to beat a recent afternoon when one of my etchings, A London Map of Days, got hung at the Summer Exhibition at the Royal Academy and was purchased by The British Library for their permanent collection of maps.

Where would you like to live?
25 years ago I was meant to be passing through London and have never left. I’ve lived between Highgate and Muswell Hill for the past 20 years and when asked if I have the desire to spread my wings and live somewhere distant and radically different I think “maybe Gospel Oak…” Quite simply, I’m hooked on north London. I love the history, the architecture, the people, the parks and the Heath – especially when the Affordable Art Fair’s on.

What is your favourite sound or smell?
The sound of my daughters laughing together is like music. Add in a champagne cork popping and some Talking Heads playing and my ears are in heaven. Favourite smell would be steak on a barbeque.

What is your greatest life achievement?
I didn’t think that getting elected President of the Royal Society of Painter-Printmakers was a huge achievement when it happened, but the longer I do the role the more I realise that I’m probably living the first line of my obituary.

What is the most important lesson life has taught you?
The kind choice is almost always the right choice. Also that the only people who believe in the Chinese Zodiac all have birthdays with cool animals.

What is your earliest memory?
Being lost in a holiday trailer park and hearing my name in an announcement on the loudspeaker. Scary.

What makes you unhappy?
Mostly centres around cars. Traffic, horns, aggressive angry drivers and being late or getting lost.

What simple thing would improve your quality of life?
If I were more organised.

What is your most unappealing habit?
Inappropriate laughter. Also buying art without consulting my wife.

Where do you hang out?
Favourite pub is the Holly Bush in Hampstead.

Who or what do you hate and why?
Houseflies, litter and Sepp Blatter.

What’s been your best experience? Worst?
Printmakers in Residence pick two prints to give prizes to at the print workshop sessions. We would pick the most charming or the most creative piece – really whatever criteria we wanted. One day I picked two pieces and by accident they ended up being by the same little boy. He was very pleased and his mother came back afterwards to say that he was so thrilled that he wanted to take up printmaking. Very gratifying.

What has your career taught you?
If you do what you are really passionate about you will eventually figure out a way to earn a living.

What is your favourite dish and why?
Houmous and guacamole falafels in pitta from Pilpel in Spitalfields Market. Discovered it with my daughter and it’s our favourite food now.

What did you do today?
Equal parts drawing and research on a new big map – the perfect day.