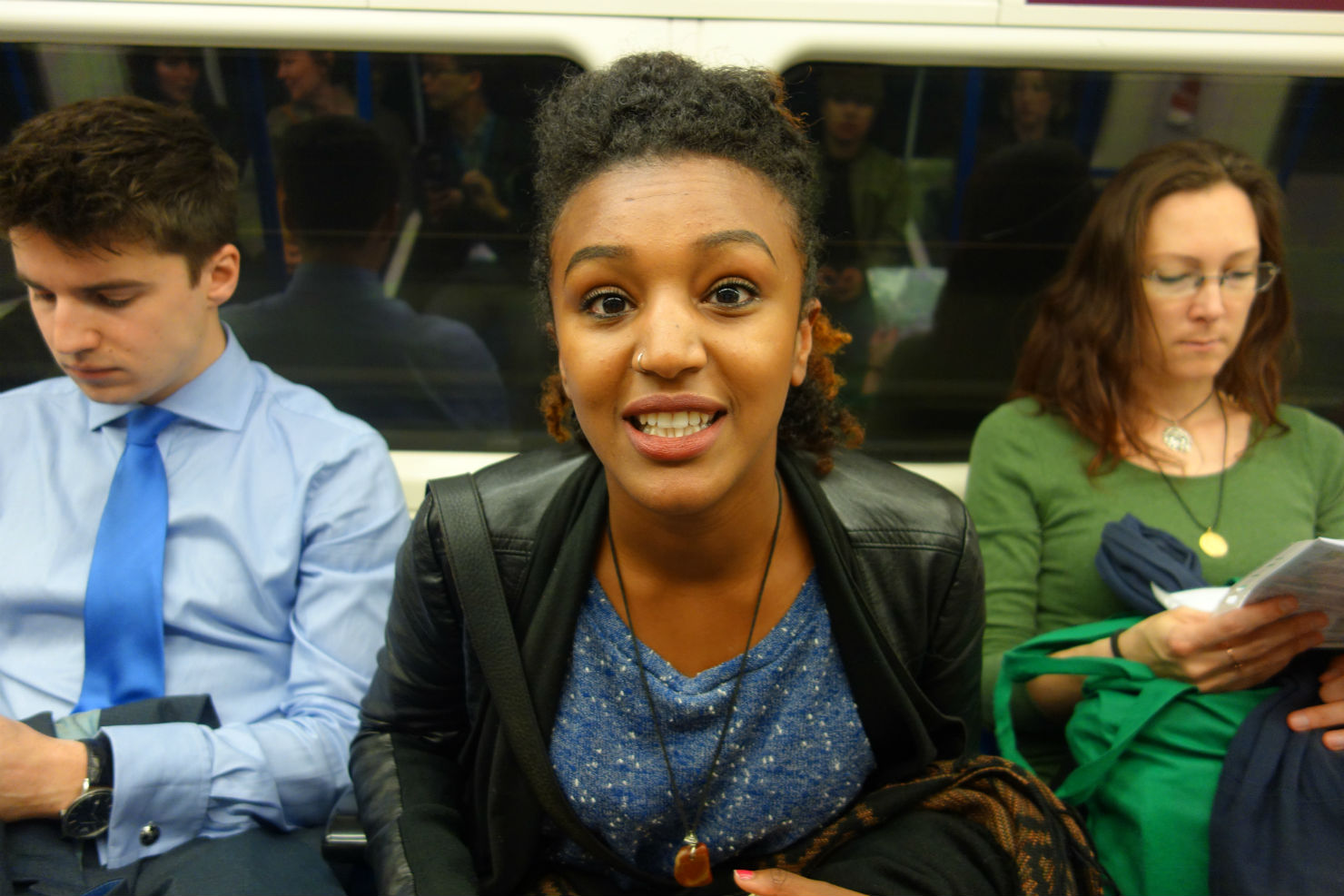 “Can you tell me something surprising about yourself?” Can you? Would you, if I asked you to? How about if we were on the tube, a place renowned for silence and lack of interaction?

This is the simple premise of Commute Blog. It was started on a whim, with no other motive than to see what would happen if I spoke to the people around me on the tube and asked to snap a photo of them.

Like most Londoners, I spend hours underground each week trying to get from place to place, hoping not to get stuck waiting for a signal to change or fall into the gap at Bank. But unlike most Londoners, I no longer try to get from A to B with as little interaction as possible. In fact, I try to talk to as many people on the tube as I can, in the hope that I might learn something surprising about themselves.

These short interviews and portraits make up Commute Blog; underneath this feature you can read some of my favourite extracts to date.

And yet when I tell people I speak to strangers on the tube, they’re usually incredulous. The fact that they actually agree to let me take their picture is even more unbelievable. This surprise is what motivates me to continue. There is such a disconnect between people nowadays. It seems we’ve created huge networks of friends online but stopped connecting with the people right in front of us.

I’m not saying that everyone should go out and start interviewing each other on the tube, but I want to open people’s eyes to who might be around them. The person next to them on the platform isn’t just an obstacle in their way to getting on the tube, but someone with a past, a present and a future.

Hearing people confide is something of a privilege for me. When strangers share their hopes and their greatest desires after such a short conversation it feels incredibly special. Most people on the tube are going to or from their day jobs, but so many of them harbour plans for something bigger. One man hopes to open his own store one day; another wants to play at a festival.

Others are already doing something they love, like the biochemist researching cure for scarlet fever and the confident burlesque dancer who had her business cards at the ready, keen to promote her passion.

Commute Blog originally started as a way of documenting people on the tube for fun, but now it has become, for me, a pursuit of people’s hidden treasures. Their hopes, their dreams, their talents, their stories. All of it comes together to make a rich tapestry, rumbling on below the foundations of the city. Anyway, without further ado here are some of my highlights to date:

“I’m a singer songwriter. Mostly I do acoustic stuff.”
Is this the dream?
“Yeah. I wanna make it big you know? Dream big. It’s the only way. There’s Lovebox festival down the road from here but I want to play bigger. Like Glastonbury. No, I mean you never know. But yeah, Glasto! That’s the dream!”

“I’m an architect but also a furniture designer. I mostly carve spoons at the moment. All different sizes and types, made of wood. I like to make really small porridge spoons and give them away to all my family. I also made all of the serving platters for my wedding. The dream is to open my own furniture store.”

“We met at a friend’s niece’s wedding. I approached her but she didn’t like me.”
Why not?
“I thought he was drunk.”

“I’m working on a biography about my family. They left Somalia to move to Sweden at the beginning of the civil war, when I was two. They just got out in time, before it got really bad. I moved back for two years when I was twelve and I wouldn’t be the person I am today if I hadn’t gone back there.”
What’s the one thing you learnt from your experiences in Somalia?
“That we’re really fucking lucky here.”

How did you feel when you crossed the finish line?
“Just glad that I’d done it. I pulled a muscle in my leg, so the last ten miles were just run walk, run walk. Everyone was so supportive though, cheering me along. I just knew I had to get it done. Eighteen months ago I was cycling and I got hit by a lorry. I went under the wheels and nearly lost my leg. I started running because I couldn’t cycle any more. To be able to run at all is incredible. But I won’t do this again. Once is enough.”

“I was running up the stairs at Kentish Town after two glasses of wine, fell and dislocated my shoulder. Two people stepped over me – they were probably heading for the same train. I was writhing around for about half an hour on the floor trying to pop my shoulder back in. I’ve dislocated it twice before, and after you’ve done it once it goes every time you fall on it. Eventually I had to get on the train but I was blacking out by West Hampstead. Luckily a guy sat with me and called an ambulance, but it never came and so I had to get back on the train and go to hospital in Barnet. It actually sounds a lot more dramatic than it was!”

Has it made you take life at a slower pace?
“Yeah, well I won’t be running for that train again.”