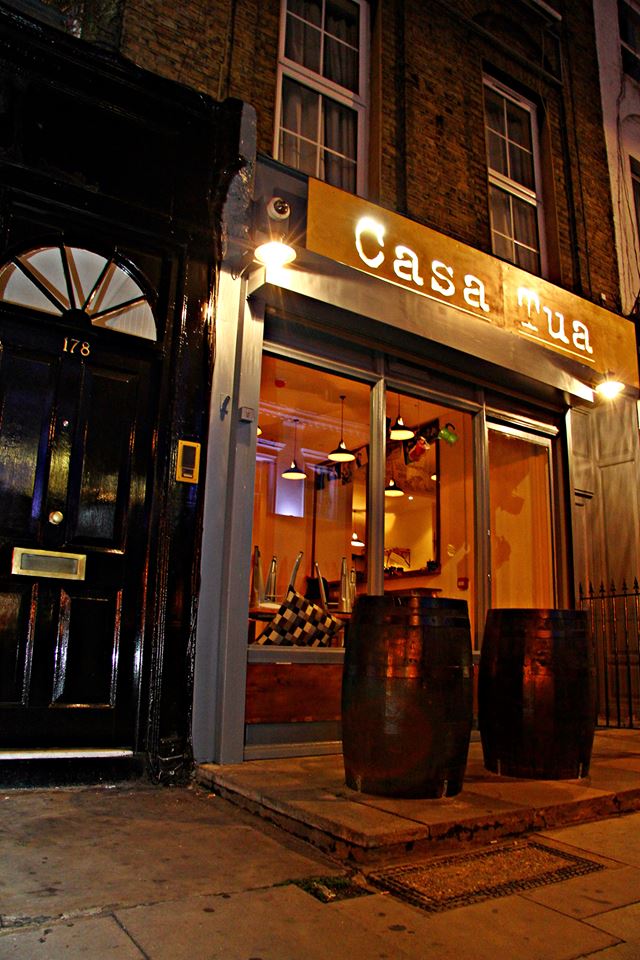 The quality of food at the tiny Royal College Street cafe has always impressed. And now you can eat your dinner there too

It’s always a madly popular daytime hangout, but earlier this year one of our preferred Royal College Street joints launched an evening service.

From Thursdays to Saturdays, the tiny café-bar morphs into a diminutive restaurant. Owner Giuseppe has bagged himself a chef from Italy’s Lazio region who’s done two years in a Michelin-starred gaff, and the menu is simple, “with a couple of twists”.

We popped by unannounced the other Thursday, hoping we could get a table. And we did – but only just, as it was the last available. Even at 7pm the place was packed, with couples propping up the counter knocking back spritzes, a tangible buzz all around. So we kicked back with a sbagliato, a less potent and refreshing take on a negroni which replaces the gin with prosecco (it literally means ‘mistake’ in Italian).

As a small, slightly chaotic space, be prepared to squish right up next to your fellow diners, so no proposing to your partner, unless you want the whole restaurant to join in with congratulations. But those who frequent Soho’s tapas bars or places like Chicken Shop will be used to such intimacy with strangers. And dozens of ex-pat Italians strutting in and out through the door saying ‘ciao’ is a great distraction.

At nightfall, the lights are dimmed, and candles lit, which yields a calmer atmosphere. We take a look at the menu, as the vinyl-only soundtrack, emanating from a modish gramophone, sets the mood. Giuseppe recommends two or three sharing plates – sometimes called stuzzichini – to start, followed by one of three pastas as a main.

A bottle of Salice Salentino, the smooth Puglian wine with just a hint of bitter chocolate, washes down the small plates, which arrive one at a time, making the sharing experience pleasingly paced.

Of the starters (£4-£10), the one that dazzles us is the octopus. The other two are more standard fare: caponata – Puglian sauteed vegetables, here served with warm bread – is solidly flavoursome, and parmesan polenta chips light as air, but there’s a lot of ’em, and we’re in danger of filling up early. (In fact the portion sizing in the starters could be easily reduced.)

But the plate to make a dash for is polipo grigliato: served with crispy potato chips, the tentacles are tender and chargrilled beautifully – as they should be for £10.50, of course.

[row][column size=”1/2″]
• Share two starters not three. We struggled a little with the mains as a consquence – and they were more impressive. Oh, and you really need to leave room for that dessert.

• Try and book a table by the window – there’s more room.

[/column]
[column size=”1/2″]
• There’s another ‘secret’ dining room downstairs which, on our visit, was also full, with a stream of people coming out at one point.

•Skip the cocktails and starters to eat more cheaply. A main and glass of wine will come in at about £18 a head. [/column]
[/row]

Happily, the mains (£11-15) are really, really good too. Even the portion-sizing is spot on. Spinach tagliatelle with strong, nutty porcini mushrooms is elevated by exactly the right amount of truffle oil. And arguably better still – and several quid cheaper, we might add – is home-made tortelloni, stuffed with a meaty, lightly spicy sausage and ricotta and served with seasonal asparagus cream. Sounds too rich? Not at all: perfectly demonstrating the art of Italian cooking, it’s skilfully balances just a few key ingredients.

Yet the best dish is remarkably still to come. We’re not too sure about a dessert of dumplings after pasta, bread and chips (carb frenzy alert) but gnocchi filled with a nutty chocolate cream is too quirky not to try. Served with Giuseppe’s riff on limoncello, mixed with freshly squeezed lemon juice for a stronger kick, the citric flavours cut like a knife through the richness of the pudding.

I’m a big fan of multi-use spaces. I like how Somewhere Over Knowhere morphs from bakery into candle-lit diner; how Anima e Cuore is a top restaurant in a rather artless, windowless space; how Truffles jumps on weekend nights from deli to wine bar.

What Casa Tua brings to this increasingly interesting party is a rowdy backstreet bacaro feel. With, of course, some of NW1’s finest food to boot.

Find Casa Tua at 176 Royal College Street NW1. Open daily until 6pm all week, and Thursdays, Fridays and Saturdays until 11pm. Contact them on Twitter @casatuacamden. Our new May print issue is a special guide to the many attractions of Royal College Street. Get one free here

All reviews are paid for. For more on this see our About section