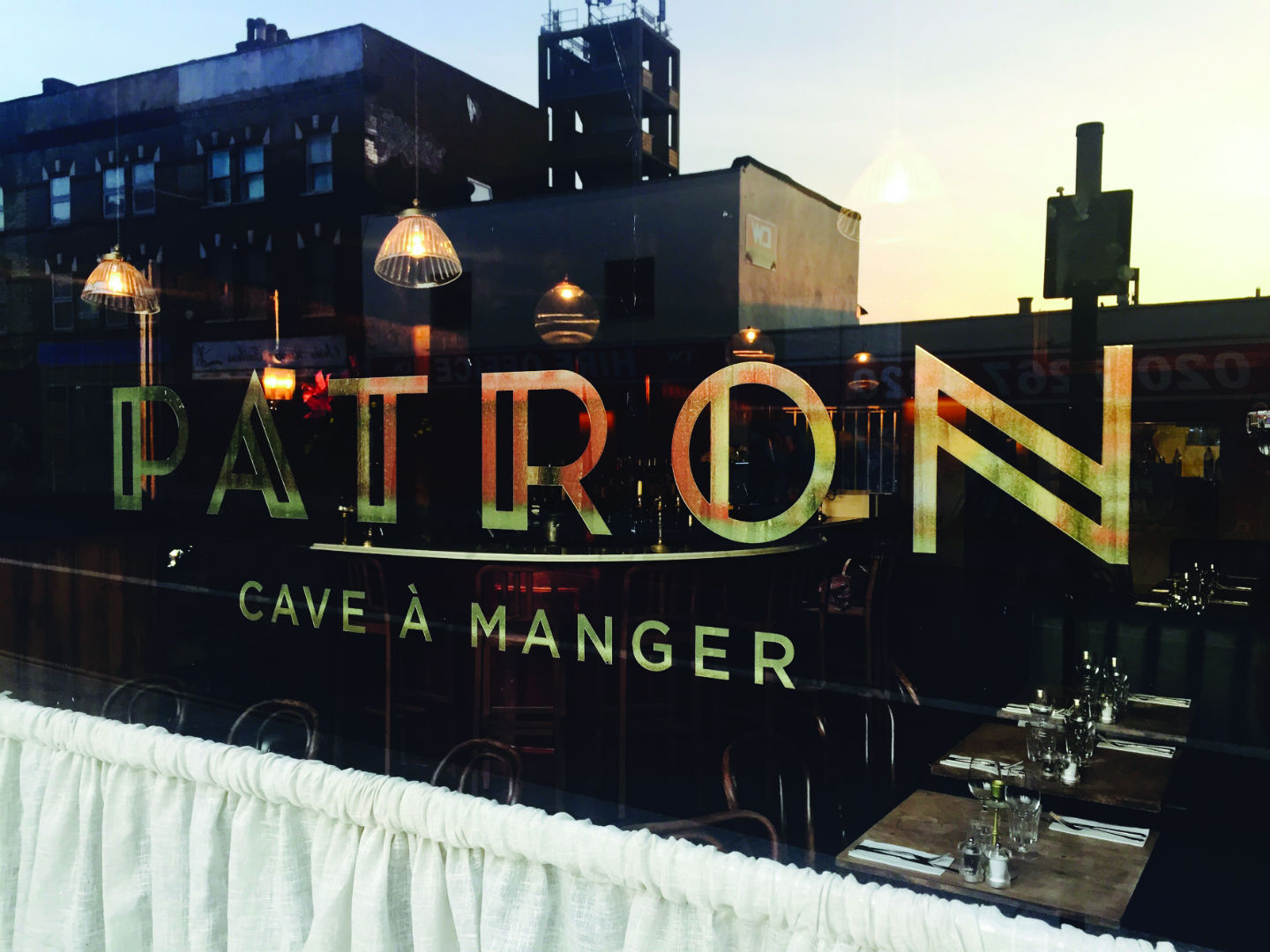 It’s the second Francophile brasserie to open on Fortess in the space of a year. But does this one get it right?

Patron is an independent ‘cave à manger’, the brainchild of a couple who, until recently, ran Cafe Gourmand in Soho. It follows Shoe Shop, a little further up the stretch, in its laidback approach to serving quality neighbourhood cuisine with more than a Gallic whiff.

But while the latter, despite solid cooking, has sometimes seemed difficult and unfriendly with its limited opening hours and quite formal service, Patron is all smiles. This one genuinely aims to please.

French-English owners Tanzi Ellison and partner Jean-Francois met a decade ago at cheffing college. “We moved to Kentish Town in 2013,” says Tanzi, who is also head chef, “and just fell in love with the area. We talked about how wonderful it would be to open somewhere and couldn’t believe that there wasn’t a French shop of some kind yet, with the school and all those newly arrived families.”

So why the name? “It simply means both a regular customer and the owner of a restaurant,” she says, “so we hope to create a friendly and convivial place for our locals.”

Fair enough. Now open just a hop from the Forum, the dark exterior, with its stylish logo, looks inviting in a low-key way. An even bigger surprise is that outside, it’s sunset boulevard. Most readers will know that the terrace at Joe’s Southern Kitchen (the former Kentish Canteen) is witness to some of north London’s most heart-rending skies, but we didn’t realise the light would flood through the windows so spectacularly here too.

In fact, within minutes of sitting down, the unseasonally hot early evening sun had morphed into a bruise – clashing with the garish red of the plant hire shop across the road.

Tanzi, together with her sous chef Louise (“an all-girl kitchen”, she says) serves small plates, charcuterie, and a changing daily edit of classic French dishes. There’s a pruned list of aperitifs and cocktails – including the eponymous house special, which blends tequila, cream and nutmeg – and a well-priced range of wines, with most available by the carafe and bottle (the good value house Côtes du Rhône is £3.80 a glass/£19 a bottle).

You could share a few of the smaller plates enjoyably as a whole meal, but we chose just two to start: steak tartare (pictured), made from beef from the Yorkshire Dales, with salty capers, zingy shallots and cornichons, was topped with a tiny quail’s yolk served in its shell: creamy and melt-in-the-mouth delicious.

Escargots, meanwhile, cooked in Chablis and drenched in garlic butter, were all silky earthiness, and yet there’s something about the tubular molluscs that – like oysters, or mussels – can divide opinion.

Just a handful of mains are chalked up on the blackboard. Next time, we’d plump straight for moules marinieres – whisked out by waiters clutching fabulous steaming pots – but on our first visit we couldn’t resist duck confit (£16.50). It duly arrived with perfect crispy skin and tender flesh, the result of both curing and hours of slow-cooking. A side of very moreish creamy cauliflower gratin delighted too, its florets still al dente (calorie concerns need to be flung out of the window on a trip to Patron).

But better still was one of our favourite cuts of beef, the onglet (£19). Sometimes called hanger steak, it’s inevitably been appreciated in France for years, and is now ubiquitous across the capital.Here Tanzi has done it proud: chargrilled and pillowy, and as red as the evening skies, it carved beautifully; in fact, it proved one of the best onglets we can remember (far outstripping one we ate at the Michelin-starred Empress in Victoria Park a day or two earlier).

And the accompanying crispy-crunchy-fluffy golden fries were surely better than anywhere in Paris. Rounding the dish off (although we had to ask for it) was a velvety garlic-rich aioli – well worth dunking the chips into.

Despite the fact that it was only a Tuesday night, the food was so impressive we were drawn like wasps to the idea of dessert. A chocolate raspberry chilli tart was impossibly dark, rich and light all at the same time, with just the slightest hint of both heat and the acidic summer fruit; grown-up, sexy and perfect, we imagine, with a strong espresso.

As we left, the sky had turned a deep dark blue, and yet the two alfresco tables on the pavement were still occupied by couples tearing open moules over rosé. A reinvention of the parade, indeed.

So yes, while it all still seems a novelty, the vogue for a cute French brasserie is hardly new round here: it started, perhaps, way back in ’78 with the arrival of the highly rated Le Petit Prince (now Troy Cafe) on that even more unlikely stretch, Holmes Road.

• Even on the quiet Tuesday after Easter, the place was nearly full by 8pm, with most tables pre-booked.

• Rave reviews will, we fear, only make it harder to get a table – so let’s hope they remember the locals!

• It’s dog-friendly. Of course it is. Watch out for Pippin, the owners’ lovely Jack Russell.

Opening hours are Tuesday to Friday, from 5pm, Saturday and Sunday from midday. Find Patron at 26 Fortess Road NW5.

All reviews are paid for in full. For more on this see our About section