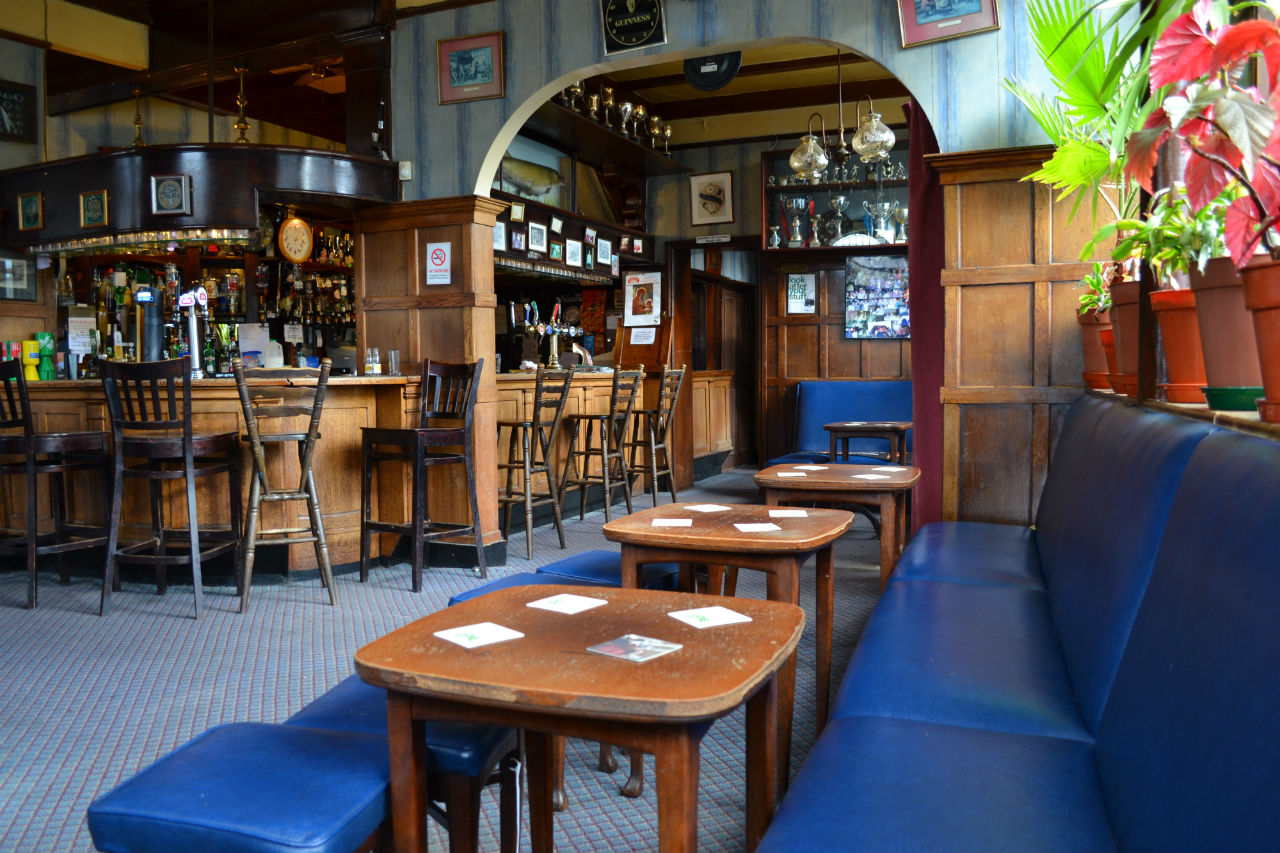 Firstly, congratulations. With 43 years under your belt, we hear you’re the longest serving publican in the borough of Camden. How did you end up in this corner of NW5?
I grew up in Ireland and we came over here when I was 17. We had a place in Blackfriars first, and in those days it was promotion to come to a bigger venue like this. When we took over in 1972, we were familiar with the area because my family already had pubs nearby: the Rose & Crown on Torriano Avenue was owned by my sister and brother-in-law in the late ‘60s, while the Exmouth Arms in Starcross Street was run by my brother.

What was the area like back then?
Queen’s Crescent, the high street nearby, had a Woolworth’s, a Sainsbury’s – it had it all.

So tell us about the pub.
There were two fireplaces, a wall by the jukebox, and another where the arch is now, plus saloon, public and private bars. There was an off-license too, which the brewery got rid of in about ’74. There was also a bridge to the toilets (pictured), which remains. The whole back area was called the Kelly Bar, with a porthole and other memorabilia originating from the HMS Kelly Ship, commanded by Mountbatten in the Second World War. Sadly it was cleared out one day many years ago when we were on holiday.

What’s this about a Karl Marx connection?
A pub was first put on a map in this position in 1752, apparently, but this building dates back to the 1850s. Yes, Karl Marx used to come in, but rumour has it that he wasn’t very generous. He liked people to buy him drinks rather than spending his money, so he’d have one or two, then go up and down the road knowing he’d bump into acquaintances who’d then shout him a pint.

Find out more about video ads for your business
Fast forward to 2015: what’s it like nowadays?
Much harder. Drinks are expensive, people haven’t got the money, and we’re competing with the supermarkets.

Who are your customers now?
Four-fifths are regulars and very nice people: all men, a few women – but it’s a man’s pub, really – all in their forties or older. Our oldest is just coming up to eighty; youngest is in his thirties.

What about doing some food?
Years ago I used to do sandwiches and stuff like that, but then the building works in Maitland Park stopped. Now it’s all residential so people are not going to bother coming out to the pub to eat, are they? Very few of them go out for a meal round here. And as we’re up the backstreet not everyone knows we even exist. When I won an award for being the longest serving publican in Camden they had to look for us to find out where we were. So if they can’t find us, how do you expect to find customers?

Hopefully you’ll get a few more now that this is out.
Hopefully!

What are your funniest memories?
There are quite a few but they’re all too rude for publication. I mean rude. But loads of celebs have come in over the years: Chris Moyles, for a couple of years with his gang. Getting back a bit there was Peter o’ Toole, Pete Postlethwaite, Bananarama – it was the first pub they drank in when they arrived round here – and quite a few Eastenders. Bill Nighy was a very young boy when we came here, training in the old Bubble Theatre in Southampton Road.

Any unusual customers?
My husband Phil is like Dr Doolittle: when he goes out to the park, he feeds everything. One day we were here and in comes a squirrel and it sits on the floor, waiting for some nuts. We’ve also had a fox wander in and have a walk around. And one of our regulars, Brian, arrives with his snake now and again.

Finally: we hear you’re up for sale?
Yes, it’s true. We’ve not signed anything yet but loads of people have been in. Some are wanting to do more food. We’ll have to see. But whatever happens, we’ll still stay living in the area.

This is box title
Find the Lord Southampton at 2 Southampton Road NW5. Next week: we meet Ben McDonald from The Junction Tavern.

To read exclusive interviews with ten other local pub owners grab a copy of our February print issue, available free from these pubs, cafes and shops