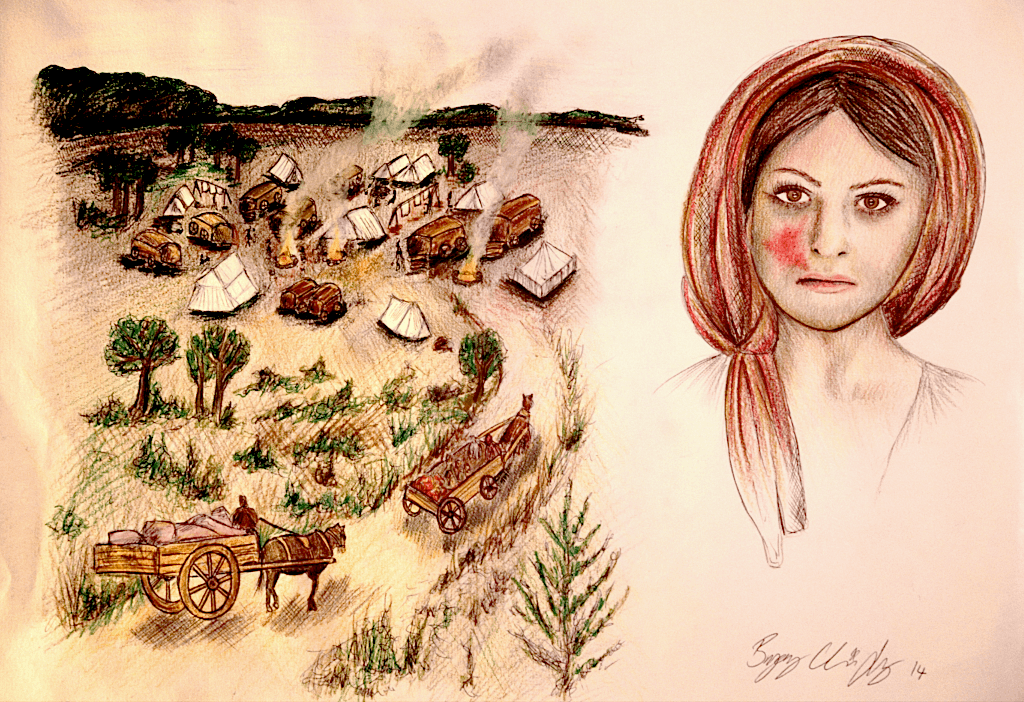 Alfie Dale is a freelance filmmaker who grew up around Chetwynd Road. Starting making films as a teenager, he settled back in north London last year after spending time in Uganda. Since then one of his scripts, a biopic of Viven Leigh, has made the Brit List, and he’s now set to direct Purple Heather (see above pic), a short period drama about the gypsies of the New Forest.

Where would you like to live?
The first house I remember was on Falkland Road, so it would be nice to go full circle and end up there again. Or a tree-house on Hampstead Heath. Definitely a good solution to housing crisis.

What is your favourite sound or smell?
I don’t much like how Camden Market has changed over the last 15 years, but I still love the smells and sounds when walking through it.

What is your greatest life achievement?
I set up a small charity in rural Uganda 18 months ago. Our first project has been really successful, seven young single mums trained and equipped to set up businesses and generate sustainable income for school fees and health care. We’re applying for funding to expand the project now after wading through a sea of paperwork. International development is a tricky area to work in, full of ethical quandaries, but I’m proud of our approach: it’s very well considered, everything managed and run by the local social workers who initiated the project.

What is the most important lesson life has taught you?
Saying yes to stuff makes life a lot more interesting.

What is your earliest memory?
My grandma picking me up from my mum’s shop in Camden market, and taking me to the McDonalds on Kentish Town Road for breakfast before school. I literally thought I was the luckiest kid alive.

What makes you unhappy?
Microsoft Word underlining my sentences with the green zig-zag and saying “fragment (consider revising)”. There’s no way to make it go away.

What simple thing would improve your quality of life?
Getting my new short film ‘Purple Heather’ made. That will be awesome.

What is your most unappealing habit?
Day-dreaming. Everyone knows when it happens, my eyes all of a sudden glaze over, then when I come back round I have to nod a smile and pretend I know what people are talking about.

What is your guilty pleasure?
I feel guilty every time I buy a pint in London. £4.50? That’s an insane amount of money to spend on a drink. Fortunately the guilt eases with each subsequent order.

Where do you hang out?
I like exploring new pubs, but two long standing favourites are The Garden Gate, and The Abbey. A few years ago I was a duty manager at The Everyman cinema in Hampstead; hanging out there after hours was great.

Who or what do you hate and why?
Snobbery. But also crap laughter-track sitcoms like Mrs. Brown’s Boys. Which perhaps makes me a self-hating snob?

What’s been your best experience in the area?
Making a ‘marryoke’ style video with Eleanor Palmer School for a teacher who was leaving. All the children and staff were miming and dancing to ‘Reach for the Stars’. Hilariously cheesy, everyone loved it.

What do you most dislike about your appearance?
No earlobes. Weird.

What’s the worst thing anyone’s said to you?
“Honestly, I don’t judge people on what they’re studying at uni – unless it’s like film or media or something ridiculous.” The awkward silence went on for quite some time.

Tell us a secret.
My initials are ABCD. My parents claim this was unintentional. I don’t believe them. Occasionally the nickname ‘Alfiebet’ pops up.

What has your career taught you?
Be nice, it usually comes back round to you. But not too nice. Be a reasonable level of nice.

What is your favourite dish and why?
Freshly caught mackerel with sea salt and lemon. No big story behind it; it’s just delicious.

What did you do today?
I worked on the latest draft of my short film script. It’s about the New forest gypsy community in 1926, when free roaming was banned and they were forced in communal forest compounds. It’s a really interesting bit of British history that’s fallen under the radar, fascinating to research. We’ve been raising funds through crowdfunding.

Describe yourself as an animal.
I get compared to a meerkat quite a lot.