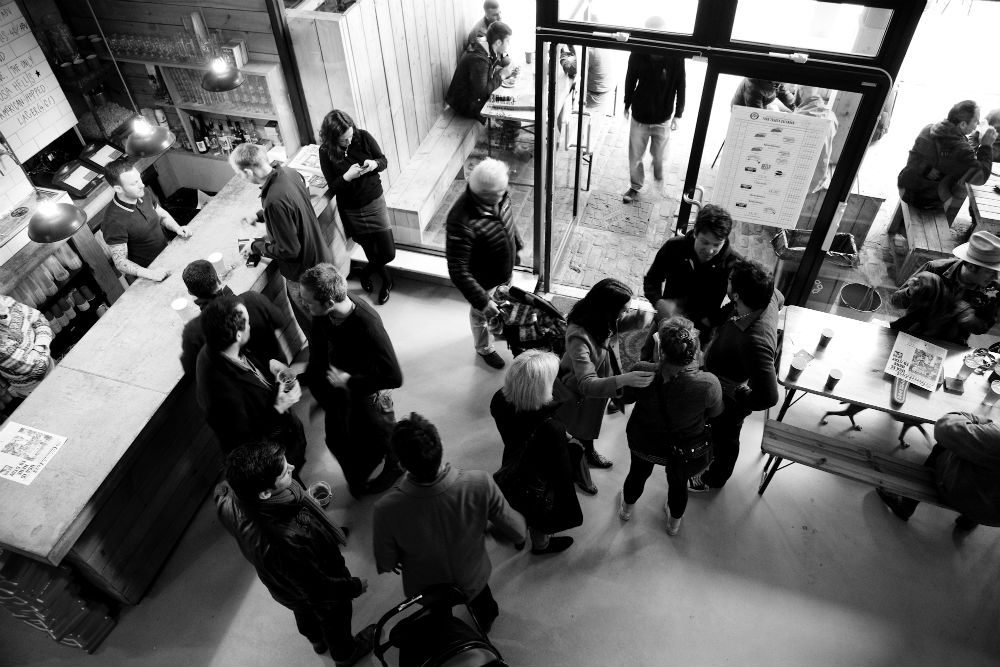 Big news over at Camden Town Brewery. Not only have they secured a space to open an alehouse in central Kentish Town – the former O’Reilly’s, which closed on Sunday – but owner Jasper Cuppaidge is also launching a campaign to fund a brand new London brewery site.

“We’ve been growing at a crazy pace down here at Camden Town Brewery over the last few years,” says Jasper. “A new brewery has been our dream for a while now and will make sure we’re able to keep up with demand and our ambitions. We hope Londoners will get on board with what we’re calling the ‘Hells Raiser’ crowdfunding campaign and help us reach our target and make this dream a reality. We want people to join the journey with us – and we’re certainly going to have some fun along the way!”

Don’t fear: that doesn’t mean the much-loved original Wilkin Street Mews site will go. We’ve been reassured by Jasper that it’s here for the long run. But firstly, what’s the plan for the new pub on Kentish Town Road?

Well, expect downstairs to be a simple, back-to-basics tap room, a little like a cross between the bar at Kentish Town West and the brewery’s revamped sister pub, the Horseshoe. Meanwhile, we understand that a casual upstairs dining room is on the cards and will serve simple, unfussy pub food.

The proposed £1.5 million ‘Hells Raiser’ campaign is being launched through equity crowdfunding platform Crowdcube and goes live at on Monday (9th February), when Londoners will be given the opportunity to invest as little as £10 all the way up to £50,000.

“The plan is that they become part of the Camden Town Brewery family and an integral part of the new brewery project,” says Jasper, who hopes the new site will create more than a hundred new jobs in the capital, as well as numerous London pub projects he apparently has in the pipeline.

The story of the Old Farm House

The former Irish pub O’Reilly’s, which closed on Sunday night with a mass singalong (for more history on the venue read our piece on O’Reilly’s here) is actually an interesting match for a successful local brewery. This incarnation is, of course, the latest in a long line of notable alehouses which have stood on the same site over the centuries.

Originally the building was known as the Star & Garter, until rebuilt into its present form with striking Victorian red brick exterior; then, as The Old Farm House it enjoyed a reign of a century or so before being renamed O’Reilly’s in 2001 (with a short stint in the 1990s as Dolly Fossetts).

Its history is imprinted into the architecture, not simply in its façade but also in the two prominent plaques on its exterior walls – one marking its time as The Old Farm House, and another noting that it was rebuilt in 1885. Inside there are high ornate ceilings, a dark wooden bar, and wonderful leaded windows.

Fancy parting with some cash? It might be worth it if you’re a fan of one of NW5’s most popular attractions, as there’ll be a rising scale of rewards: those investing a tenner through to £99 will receive their very own share certificate, a specially patented ‘Hells high-five’ – and an optional selfie from a bartender of their choice next time they visit the brewery bar. Rewards then increase with the investment amounts, ranging from Hells Raiser T-shirts and other campaign merchandise plus discounts at the brewery bar – through to beer delivered directly to your door. Hic. For investments over £100,000 (that’s us out) the team will throw a huge party for the generous donor and up to fifty revellers, for £250K a three day German brewery tour…and as for those wishing to go all out and invest the maximum allowed (er, £500,000)? Well, we can only imagine what gifts will be showered upon the lucky individuals.

There’s also a host of various other events throughout the 60-day campaign, including a Hells Raiser ‘lock-in’ party on Friday 13th February at the new site, the former O’Reilly’s site (pictured above) set to be renovated with part of the funding. And there’ll be a huge ‘Selfie Wall’ at the current brewery bar, where investors large and small will be encouraged to snap themselves and post on social media with the hashtag #HellsRaiser – in return for a complimentary half a Hell’s at the bar.

So will Jasper’s dream of a new brewery site in the capital be a reality? We’ll have to wait and see, but all we can say is: we’re glad he’s keeping it Kentish.

This is box title
For more information on how to invest in the Camden Town Brewery fund please visit their website. The new pub in the former O’Reilly’s, 289-291 Kentish Town Road, NW5 2JS is set to open in June. Find Camden Town Brewery Bar at Wilkin Street Mews, opens daily 12-6pm and 12-11pm Thurs-Sun.