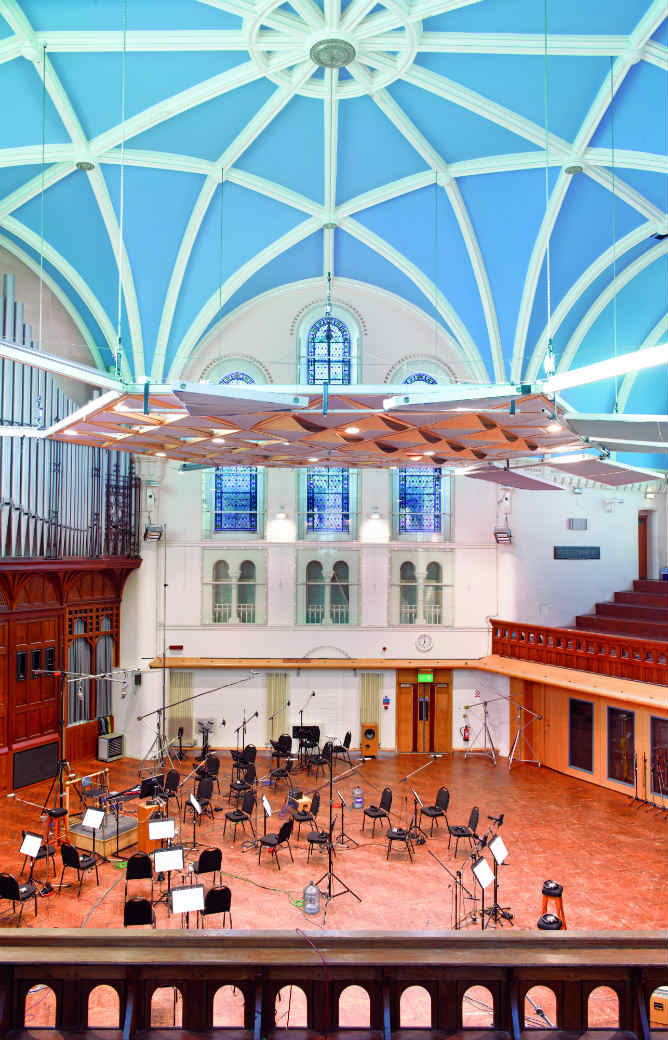 Ever wondered what goes on at Air Studios?

A fascinating new book, Unseen London, offers readers access to fifty extraordinary locations, telling the story of how each was created and what it reveals about the city. We publish an exclusive extract

Air Studios live up in elevated Hampstead, housed in a listed gothic church of considerable jaggedness. It includes one of the largest recording rooms in the world, Lyndhurst Hall, capable of housing a symphony orchestra of more than ninety musicians, plus provision for large choirs in the raised galleries. There are also three further studios for smaller orchestras, film scoring and mixing. Soundtracks for a large proportion of all mainstream cinema productions are recorded here, and many leading musicians use the studio. AIR describes its technical capabilities in terms of the exceptional dynamic range and frequency response handled by massive control desks, while the building holds high architectural and historical interest.

Lyndhurst Road Congregational Church was designed by the eminent architect Alfred Waterhouse, whose most famous creation is the Natural History Museum in South Kensington. He was responsible for many major buildings in Manchester, including Strangeways Prison and Manchester Town Hall, which is widely rated as a gothic masterpiece. Waterhouse was an expert at exploiting irregular spaces and difficult sites, and favoured red brick and terracotta. Lyndhurst Road church was a late commission for him, built in 1883–4 for the Nonconformist Congregational church. Its first minister was the influential churchman and writer Dr Robert Horton. In 1972 Lyndhurst Road became a United Reformed Church when the Presbyterian and Congregational faiths merged. It served as a church until 1978. Today it looks forbidding with its deep red, almost purple brick, and with steep gables seeming to face in every direction. The ground plan is an irregular hexagon, dictated by the plot of land available: a strange shape.

Air studios engineers, who proudly speak of Lyndhurst Hall’s tremendous acoustic properties, might be amused to know that during the first-ever sermon, delivered in July 1884, the preacher’s voice ‘echoed around the walls, almost unintelligible to the congregation’, according to the Minister Horton. ‘The architect Mr Waterhouse told us all along he could not guarantee the acoustical effects.’ The theme of that sermon had been ‘How amiable are Thy tabernacles, O Lord of hosts’. A sounding board installed over the pulpit and thick curtaining under the galleries later improved matters and the minister then reported that ‘the reefed curtains break the voice and deaden the echo’.

Sound in the same space today is influenced by a motorized acoustic canopy, which is suspended from the vaulted roof. AIR technicians can vary the benchmark 60-decibel reverberation decay – the time taken for sound to fade to silence – from seven and a half to three seconds, changing the acoustic characteristics for choirs, orchestras, or solo instruments and singers.

AIR once stood for Associated Independent Recording and was launched by possibly the most famous person in the business, Sir George Martin, producer of all Beatles records, after he moved from EMI. AIR is often compared to Abbey Road studios in terms of recording capability. The company has been based in Oxford Street and Montserrat, although the Montserrat studio was destroyed by Hurricane Hugo in 1989. Sir George Martin maintained his interest in the studio until 2006. In December 1992 it marked its move to Lyndhurst Hall with a broadcast of Under Milk Wood, narrated and directed by Sir Anthony Hopkins.

Many top international stars have recorded here, including Sir Paul McCartney, Stevie Wonder, Coldplay, U2, Van Morrison, Michael Bublé, Robbie Williams, Paul Weller, Jamie Cullum and countless others. AIR is also renowned for its recording of soundtracks for films and TV, such as Quantum of Solace, Bridget Jones’s Diary, Atonement, Pirates of the Caribbean: At World’s End, Hunger Games: Catching Fire, Doctor Who, Sherlock and many, many more. Surprisingly they still record in analogue.

This is an extract from Unseen London by Peter Dazeley and Mark Daly, published by Frances Lincoln and priced at £30. Find out more about it here