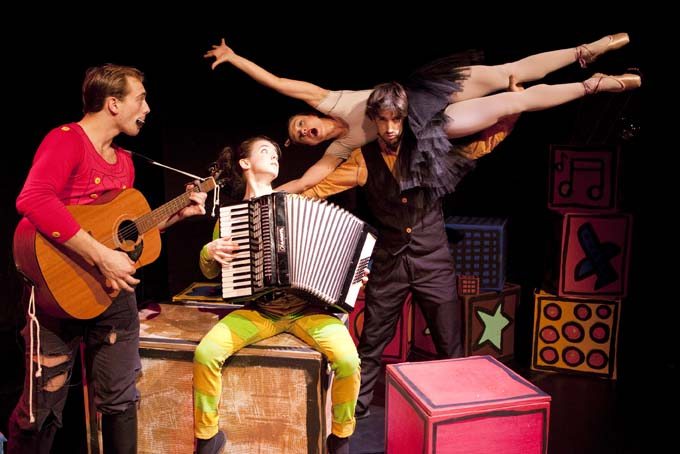 My daughter’s eyes and mouth stand pleasingly agog as the actors emerge. She’s thoroughly captivated – bar the odd nudge in my ribs – as brightly painted playroom boxes open up to reveal our plucky heroes, heroines and villains.

Then rapid-fire costume changes and deceptively complex stage management convince us that a whole host of nursery floor characters has come to life, when in fact the cast of the play numbers only four.

Hans Christian Andersen’s Steadfast Tin Soldier has been reimagined by the talented Peut-être Theatre company as a physical, fantastical show without words, that has the young audience alternately transfixed or doubled up giggling and hooting.

The classic fairytale text becomes a romp through gymnastic slapstick (our favourite bits), human beatboxing, audience participation (mercifully quite tame) including chases through the aisles and even a shower of bubbles, ensuring maximum spectator delight.

Our one-legged soldier is thrown into an adventure that sees him parted from his ballerina love, beaten up, swallowed by a big fish and ultimately returned, only to find that this production stays uncompromisingly faithful to the incendiary ending of the original story.

This rollicking treatment of his progress allows the cast to showcase many physical talents, from musical hands and mouths to enviably bendy legs and torsos, all of which emerge on the stage with enough pace to hold wriggly attention-spans, no problem.

When the sad closing scene does unfold, it’s quite a shock after all that joyful fun. Eyes more used to sanitised happy endings stand agog once more. Yet it is this final message that gives this Tin Soldier its power.

The actors gather at the door to wave us off, proving they are fine, despite it all. And that leads to much debate – on the nature of the stage, make-believe and metal toys that melt as easily as they come alive – from my enthused four year old, as we repair for a post-theatre slice of cake at Made.

It’s an as equally thought-provoking and striking children’s Christmas production for the Roundhouse as last year’s My Brother The Robot (that the two of us reviewed here).