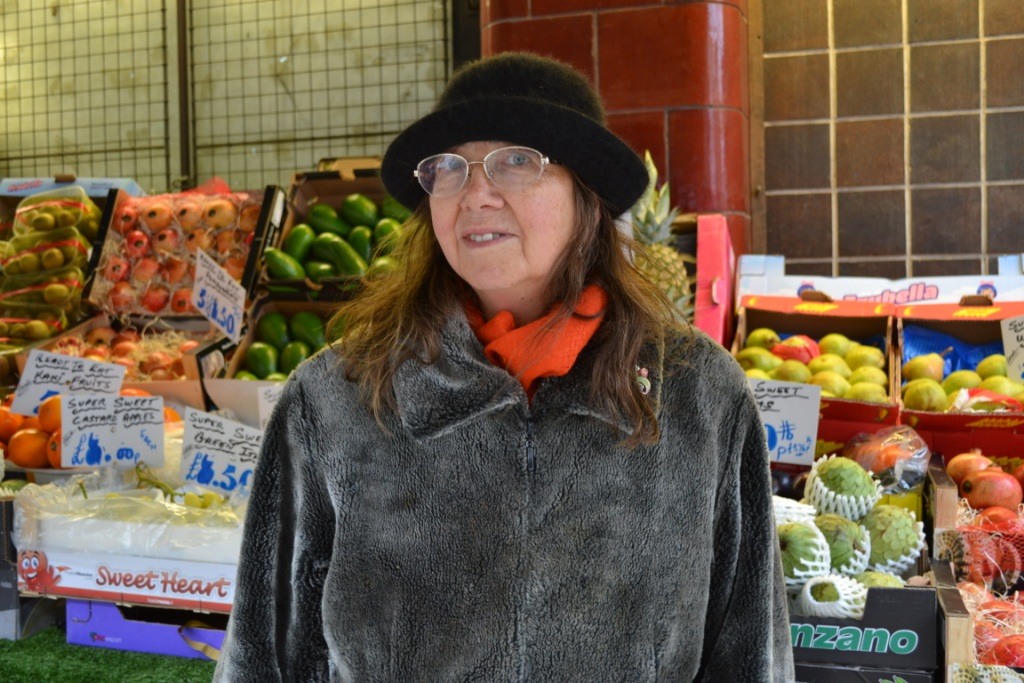 ‘People buy from us precisely because they don’t have to go inside a shop,’ says Sally Keable

“We found out last week when we saw a notice on lamp post. That’s when we realised we were being thrown out before planning permission has been granted for the new Wahaca restaurant.

We knew it was coming, of course, but didn’t know it would be as soon as Jan 20, when we must leave our pavement spot, and April 20, for the shop. The council gave us a separate license for the pavement which they can terminate more quickly. (They also know we can’t do much inside the shop if we can’t put anything on the pavement.)

Ever since the Kentishtowner piece came out, everyone keeps suggesting we move to the canopy area. If we have to leave here then we would consider it as we would consider anything to stay in Kentish Town – and that’s the most viable option. In the short term, however, we’d have to cut down the number of lines we sell as the space is smaller, while doubling sales on existing lines. And the location isn’t as good as right next to the station.

The other alternative is a lot more expensive: to take a boarded-up outlet like Kutt Zone opposite. Right now our rent is so little and rateable value is low as we don’t have to pay any rates (after all, we don’t have any water supply here or toilets). A shop would double our costs, and yet we’re not sure our sales would double. People buy from us precisely because they don’t have to go inside a shop – they just throw us 50p on the scale and on they go. It’s instant.

The good news, however, is that Wahaca want to work with us. I’ve spoken to them this week. They insist the outlet was shown to them with our shop included. I can’t see why they need the bit of space where we are, however. There’s a lift, and lots of space inside as it opens out into an office. They can put the lift somewhere else. But they’re now saying they’ll try to set up their burrito takeaway stall under the canopy rather than make us move.

So it’s all down to TFL, who – we believe – want us to go because we are blocking the pavement. We need them to cancel our notice to vacate.

We are pushing for a three-way meeting with TFL and Wahaca to work on a compromise: to give up some of the space by the proposed entrance and move further along the wall of the station. There is room for both of us. Wahaca have told us they are proposing all this to TFL and will let us know how they get on.

In the meantime we have started a petition – the more people that show their support here, the better.

‘The bottom line is, if The Fruit Bowl has to move as part of this lease, then we would not take the lease,’ says Wahaca co-founder Mark Selby

“We wanted to clarify what is happening with the unit above Kentish Town station as we feel that we may have been slightly misrepresented to date. We are so excited about the possibility of opening here precisely because of Kentish Town’s unique culture, unaffected vibe and sense of community – the last thing we want to do is disrupt that.

Wahaca hasn’t signed any lease yet and we have put in planning application for use of the upper floors of the site as an A3 restaurant only. Before the position of Sally and the Fruit Bowl was fully understood, we had been considering the possibility of a take-away burrito and taco shack on the ground floor, in the space we had been told they were moving from. The difficulty of visibility and access that we might have if we took the upper floor only was one concern in our developing plans.

Last week the full situation with The Fruit Bowl came to light and we’ve since been to discuss with Sally and find out what she wants in the future. We realise that small independent businesses are at the heart of any community and need to be protected and supported. We wouldn’t take this space if it caused problems for The Fruit Bowl, but we think that by changing our plans and allowing space for both her stall as our disabled access lift, we can create a space that benefits both of us as well as the Kentish Town neighbourhood. Hopefully the additional interest from people coming to our restaurant will help Sally’s business to grow as well.

As part of changing our plans for this new entrance, we would like to see if Camden Council can work with us to look into the opportunity of setting up the takeaway taco stall in the “covered canopy” area instead of where the Fruit Bowl currently is. If this is given planning permission, it’ll help to bring some more life into this underused space as suggested by the Kentishtowner.

The bottom line is, if The Fruit Bowl has to move as part of this lease, then we would not take the lease, so we are now working with TFL to ensure that doesn’t happen. We have always worked with small, local suppliers and so putting a business like this in jeopardy is totally against the ethos of Wahaca.