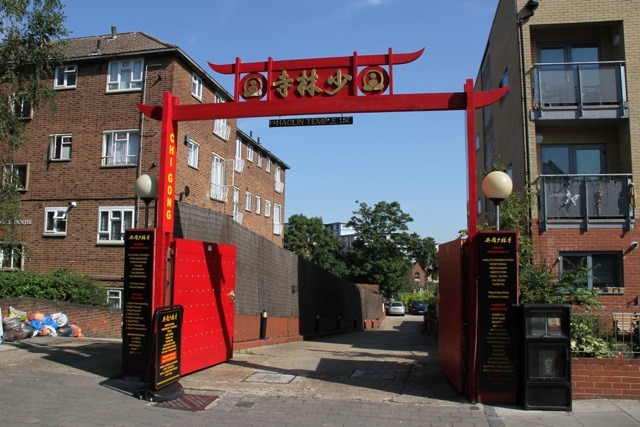 Behind the heavy wooden gates of the Shaolin Temple UK on Junction Road, preparations are under way for the biggest event in its history.

Why? At the weekend (Oct 11 and 12), fifty Chinese monks, along with the abbot of the Shaolin monastery, are coming to London for the Shaolin Cultural Festival at the Greenwich 02 (see below).

They’ll also be visiting the temple in Tufnell Park to perform a unique blessing ceremony – including some spectacular kung fu. (In case you didn’t know, the monastery is actually best known for its kung fu monks.)

So yes, it’s a local landmark on a busy stretch, but how many north Londoners really know what goes on in there?

Enter: behind the red gates

This is the British branch of the Shaolin Temple, the Buddhist monastery in the mountains of Henan, China, famous for its warrior monks – shaven-headed, meditating, vegetarian kung fu masters. Behind the gates in N19, is not a monastery, but a kung fu school and cultural centre, where students study and practice the Shaolin arts of kung fu, San Shou (hand to hand combat) Qi Gong (life force training) and Cha’an (Zen) Buddhism.

The temple has been here since 1999. It was set up by Shifu Shi Yan Zi, a disciple sent by the Shaolin Abbot to bring kung fu practice and Buddhist teachings to the UK. Speaking no English, and with very few resources, Shifu Yan Zi built his temple on a little piece of land next to the railway line. At first it was no more than a shack, and Shi Yan Zi was the only teacher. But slowly, the word spread that there was a genuine Shaolin master sharing his knowledge in Tufnell Park – and his following began to grow.

Since those early days, some 4,000 students have passed through the gates. The people drawn here are an eclectic mix of Londoners from all walks of life, sweating together in this little piece of China in deepest N19.

In the courtyard students train next to a tinkling waterfall as carriages thunder past on the mainline to King’s Cross. While in the fist hall, with it’s full-sized boxing ring and row of punch bags, students pound away, practising the combat applications of their kung fu. Next door in the Ch’an hall the air rings with the sound of bamboo whacking on flesh as students learn to massage themselves with the Shaolin energy brush; and then there’s the Buddha room, where students sit cross-legged on red cushions to learn about the true heart of Shaolin Kung Fu – Ch’an (Zen) Buddhism.

Shifu Yan Zi’s little temple has attracted the attention of the mothership back in China, and this week the abbot of the Shaolin monastery and a delegation of 50 warrior monks will pay a visit rare visit to London as part of the Shaolin Cultural Festival. A week long celebration of kung fu and Chinese culture, Shi Yan Zi hopes it will open the doors of Shaolin to many more people.

It takes over Greenwich’s O2 Soccerdome and many of the once-secret arts of Shaolin will be on display, with spectacular kung fu heading the bill alongside Chinese medicine, calligraphy, a rare art exhibition and even an authentic tea ceremony.

Entry includes a free training session at the temple in Tufnell Park, so you’ll never again walk past those red gates – and wonder what’s inside.

The Shaolin Cultural Festival, co-organised by Shaolin Temple UK, is at the O2 Soccerdome Greenwich on Sat 11 and Sun 12 October. Tickets £25 from here. The Abbot will visit Tufnell Park on 13th October for a special blessing ceremony; members of the public welcome, call 02076878333.

Hannah Liptrot is a student at the Shaolin Temple.