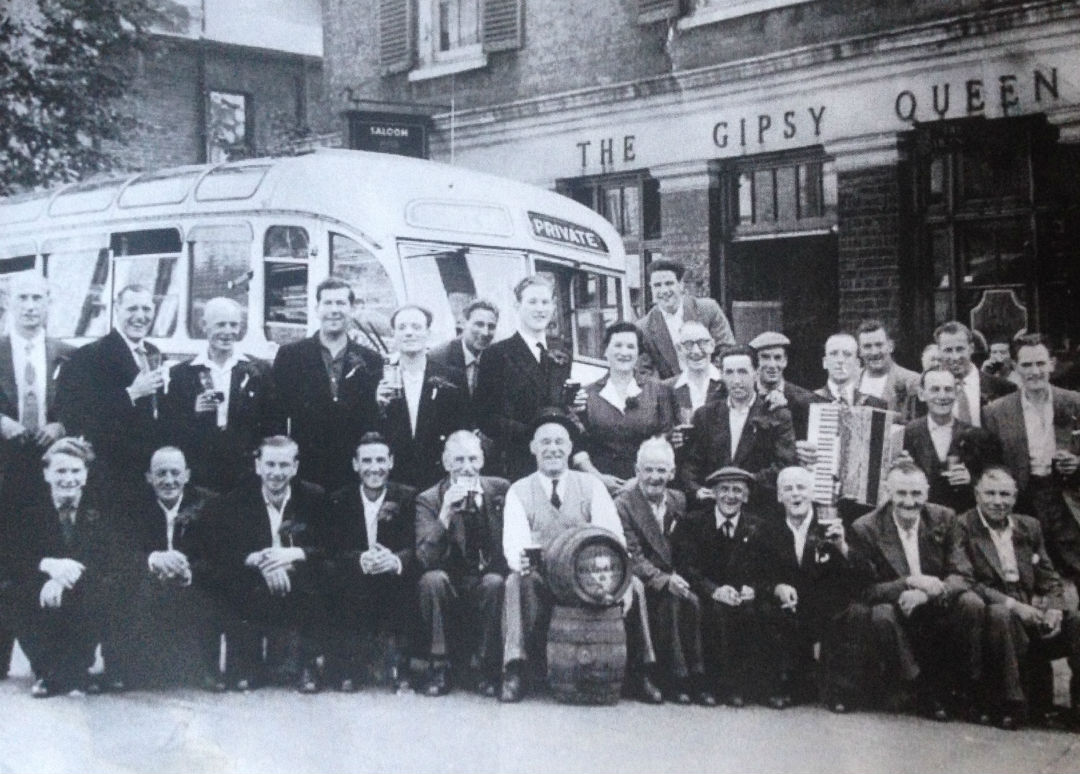 The Bluebell: from bean-feasts to Bread & Butter

As the refurbished Malden Road pub opens its brand new kitchen next week, here's an intriguing snapshot from yesteryear

Isn’t this an evocative photo? Back in the early 1950s, a group of Gipsy Queen regulars pose tidily for the camera, about to embark on a bean-feast down in Margate or Brighton. Note the accordion, barrels, suits, smiles and shiny minibus. And, lest we forget, this was before the 1960s rebuild of Gospel Oak, so Lismore Circus and its surrounds would have still been peeling Victorian terraces.

It’s one of several pics that long-term drinkers at the Bluebell – formerly the Westport Inn – have donated to bar staff. This particular image was found in the Camden archives in Holborn by a zealous CAMRA member.

The pub’s history snakes right back: originally constructed in the 1850s, it was christened the Gipsy Queen, a name retained even after a 1930s rebuild.

It formed part of the short Gipsy Terrace, whose two remaining original houses still stand. One is the undertakers, Levertons, the other a wonderfully atmospheric fishing tackle shop run by the the Sharp family, who’ve owned it since 1964. (But that’s another story in itself, and one you can read about on these pages imminently).

Current landlord Thomas Browne’s parents took the Gipsy Queen on in 1991, renaming it the Westport after their home town in County Mayo. “At the time there were bare knuckle fights in the cellar,” he says, “and the owner was so scared he allowed his Alsatian to roam the building.” Ouch.

But Browne’s father managed to turn it into a traditional neighbourhood favourite for 22 years, until it closed for refurbishment late 2013. Why the new moniker? “It’s simple,” he says. “The bluebell is one of my favourite flowers, but it also creates a softened identity, contrasting the harder edges of the previous name.”

He also admits that although the Westport “was loved by some, clearly it was avoided by many. We hope that the changes will make a more appealing spot for everyone: former customers, inquisitive people who felt excluded previously and those who maybe even were repelled by the place.”

Alongside a damn fine selection of craft beers and ales, and revamped interior – complete with open kitchen in the rear dining room – the good news is that a long-awaited food offering kicks off next week.

Head chef Jason Ryle, a Gospel Oak local who’s recently been working at Hackney’s Cat and Mutton, says readers can expect modern British classics and seasonal dishes. Oh, and apparently the bread and butter is to die for (as we’d hope, given the residency name). “Chef Ryles serves this dish as a kind of signature,” says Browne, “and I have never tasted anything quite like it.”

So from Oct 3rd you’ll be able to decide for yourself, or even book it for a bean-feast of your very own; accordions, barrels and suits are not, of course, compulsory.

Ryle’s Bread & Butter Kitchen opens at the Bluebell on Friday 3rd October. 166 Malden Road NW5 4BS. Do you recognise anyone in the pic? Get in touch below.

3 thoughts on “The Bluebell: from bean-feasts to Bread & Butter”

3 thoughts on “The Bluebell: from bean-feasts to Bread & Butter”