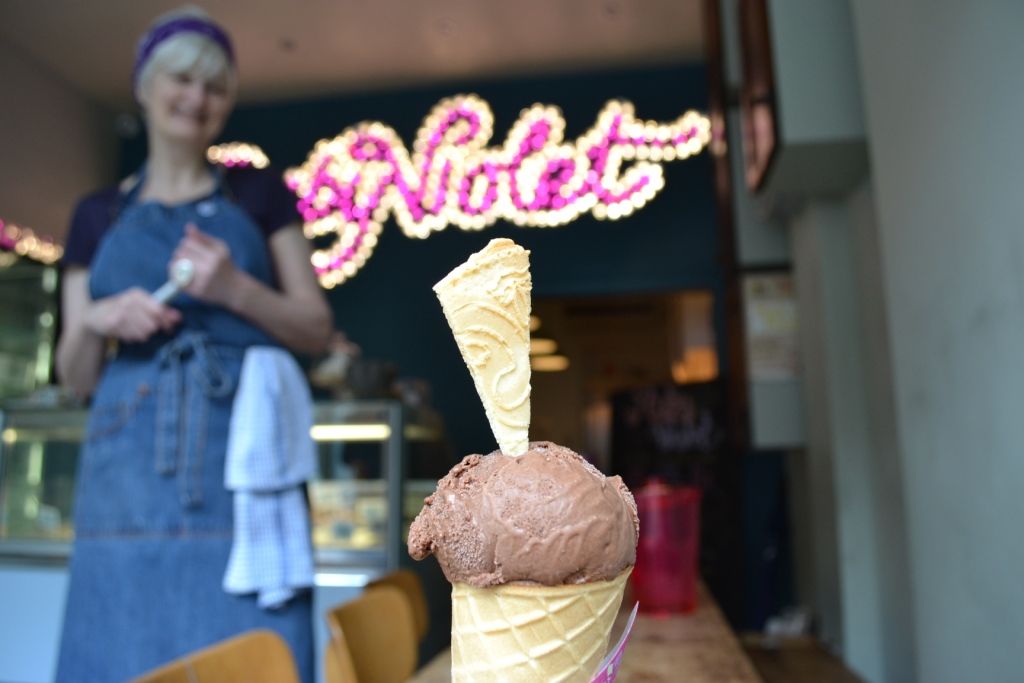 Why I opened Ruby Violet

Everyone knows the name of north London's most acclaimed ice cream parlour. But who inspired it? Founder Julie Fisher reveals all

Ruby Violet, my maternal grandmother, was born on the first day of spring 1906. King Edward VII was on the throne and a heatwave hit that summer. She was a strident opinionated lady with dubious driving skills and a love of Energen rolls, Penguin biscuits, golf, bridge – and ice cream.

Ruby Violet loved a choc ice and as a child, I remember my sister and I eating slices from a block of plain ice cream squashed between a couple of wafers. When we went to my grandma’s house for our holidays, we badgered her for ice cream and she usually gave in, probably because it was a good excuse for her own indulgence.

For 34 years I was an editorial and advertising photographer and had fun working on many cookery books with great home economists in all sorts of glamorous locations (usually within the M25). But times change and as the digital global age took over I felt the need to connect once again with people, especially my local community. I love the conversations, the random nature of observations, the exchange of ideas, the enormous diversity of people coming through the door in any one day, and the amazing range of talents that all lie within a small radius of NW5.

Most people love ice cream. It reminds them of happy times, childhood memories of holidays and hot sunny summers. There is a combination of nostalgia mixed with the excitement of discovering fresh new ingredients, even if you then find they appeared in Culpeper’s Complete Herbal in 1653. It’s a happy environment; ice cream makes people smile.

I started making batches in a small domestic maker and tested the recipes on my enthusiastic neighbours, who were then, and still are, very forthcoming in their views. After a few months a new market opened just down the road and I took a stall (tested in my neighbour Stefanie’s garden) outside the Tufnell Park Tavern for four hours every Saturday.

The back seats were removed from my car and every weekend a spontaneously arranged crew, coerced from the immediate vicinity, lugged the essentials of an ice cream parlour: a heavy duty freezer box, two small freezers and a display freezer, three trestle tables, a gazebo and endless strings of homemade bunting, all transported in three separate journeys to the market. There we sold ice cream in cones and tubs, whatever the weather, to an increasing band of loyal and hardy customers.

After customising the car in the service of ice cream, I then turned my attentions to the ‘ice cream factory’, which had hitherto been our home. Large machines and freezers gradually filled our living room, our social life fizzled out and what convivial conversation there had been was now drowned out by the sound of whirring machines. A year later we moved into premises on the borders of Tufnell Park and Kentish Town, a little jewel in the heart of Fortess Road, that has been set up and run on the principle of small is beautiful and all ingredients are sustainable, fresh and local when possible.

All the ice cream is still made in small batches, using seasonal fruit prepared daily on the premises. In summer the mint, rhubarb, apples and honey are all sourced from within a few miles and the blackberries and damsons come from my home village of Flintham in Nottinghamshire.

Another of our recycling projects has been the restoration of ‘Billy the van’ – a 1968 English Austin, who had spent the previous 30 years lolling around in a field. Now renovated as a fully equipped ice cream van, we are able to venture out to do our good works.

The quality of ingredients is important. In these days of industrialized farming it is always good to have a sense of where ingredients come from. The ingredients in so much of supermarket ice cream, especially soft scoop, are varied and often surprising. I never imagined that you could buy ice cream that was made from pork fat, or nowadays the more environmentally controversial palm oil, but then I was also surprised that you could buy ice cream that had no whole milk or cream content whatsoever.

At Ruby Violet we’re happy to keep it local, use traditional ingredients, make it by hand and talk to our customers.

If you were royalty you would have been enjoying ice cream for more than 300 years. In 1671, King Charles II and his closest friends indulged in dishes of ice cream and strawberries, but made sure it travelled no further than the top table. It remained the preserve of the aristocracy for as long as it required an ice house, tucked away in the corner of a rural estate, and a sizeable lake or moat from which to harvest the ice.

Developments in technology and transportation during the 19th century opened up the market for ice cream among the wealthier middle classes. Ice shipped from as far afield as Scandinavia and beyond, travelled inland by canals to cavernous subterranean ice houses, from where it was distributed to the growing ice cream industry.

By the end of the 19th century an interest in and an appetite for ice cream extended throughout society. Elaborate creations coaxed from pewter moulds adorned the tables of the rising bourgeoisie, while penny scoops were served on the street. At the sharp end of this world were the Italians, who brought with them a culture of ice cream-making.

The first ice cream stall opened up outside Charing Cross Station by the entrepreneurial Carlo Gatti. But it was the elegant charm and sound business acumen of Mrs Agnes Marshall that brought it into the British domestic realm. With her energy and pioneering spirit, so marked in the Victorian era, she patented moulds and apparatus to accompany her recipe books and cookery classes. From the 20th century onwards production became fully industrialised, driven by the rapid developments in manufacturing techniques and refrigeration.

4 thoughts on “Why I opened Ruby Violet”

4 thoughts on “Why I opened Ruby Violet”