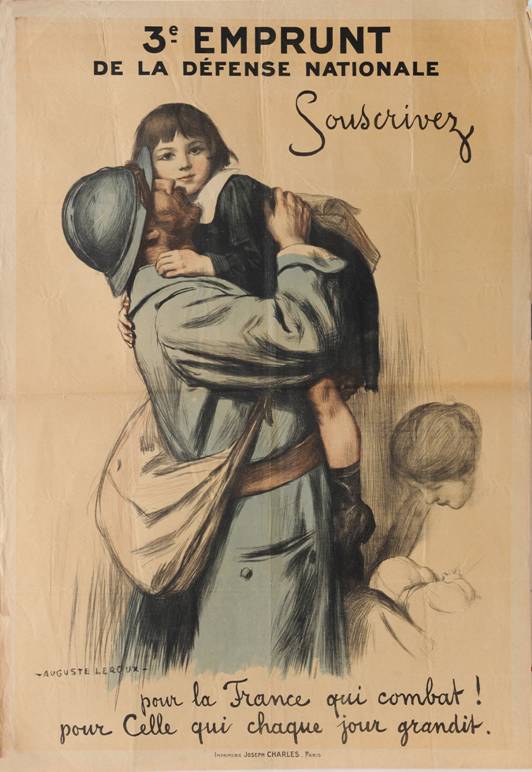 We don’t normally feature Belsize Village – the peeling pastel oasis west of Haverstock Hill – in these pages. But, now and again, it makes a pleasant diversion, perhaps with a spot of lunch afterwards at acclaimed Greek joint Retsina (for more of this, see our guide below).

Corner gallery Sylvester Fine Art nestles right at the heart of this sleepy enclave. Its schtick? “Quality art at sensible prices”, and they host a wide variety of European artists primarily from the 20th and 21st Century.

Their latest show, opening today, is a thought-provoking display of French WW1 propaganda posters to mark this year’s centenary. The lithographs, created by a myriad of leading artists of the day – such as SEM, Faivre and Steinle – are a snapshot of history from a time of turmoil, and show that despite the drama of the events, extraordinary art can still be created.

By the end of the 19th century France had become the world leader in commercial art, leading the way in recognising the impact of the poster as a means of communication. It was during the Great War that this medium was used more than at any other time during history.

Whether supposed to inspire, inform or persuade, these posters can also be examined beyond their simple artistic beauty: women, for example, were used as a tool from early on, either portrayed as figures of vulnerability or strong supporters of their men.

Some could be said to be almost blueprints for future steps in propaganda within the digital era, particularly if looking at the conflict in the Middle East and associated streams on social media platforms, or the response from hackers organisation ‘Anonymous’ to the shooting of Michael Brown in Ferguson USA.

Propaganda and art may not be naturally or instinctively aligned, and it may take a hundred years before an audience can feel detached enough to appreciate their creativity. This exhibition treats us to more than simply some curling old war posters: it marks the centenary with a stimulating look at the mindset of people in 1914, which may even give us perspective on our own lives a century later.

And finally, a caveat: while fascinating to study up close, if you want to buy one, you’ll need deep pockets – they cost upwards of £650.

What? The cute bit where Ornan Road becomes Belsize Lane. Think pastel terraces and community spirit. Kind of. Paved area with benches to sit and soak up atmosphere.
Coffee: Roni’s Bakery, the bagel shop buzzing on a Saturday morning. Great alfresco too.
Booze: the only pub became swanky restaurant XO, chucking a bit of West End glamour at the Village. But you can drink in the bar.
Eat: lots of choice, from smart Greek (Retsina, where we highly recommend the chicken souvla) and cosy Turkish (Beyoglu) to Indian (Hazara) and modern British (the Belsize Kitchen).
Note: it’s not that old, alas, only dating back to the mid 1850s. Stephen Emms
This is box title
Exhibition launches today. Free. Sylvester Fine Art, 64 Belsize Lane, London NW3 5BJ T: 020 7443 5990. For our complete guide to Belsize Park click here