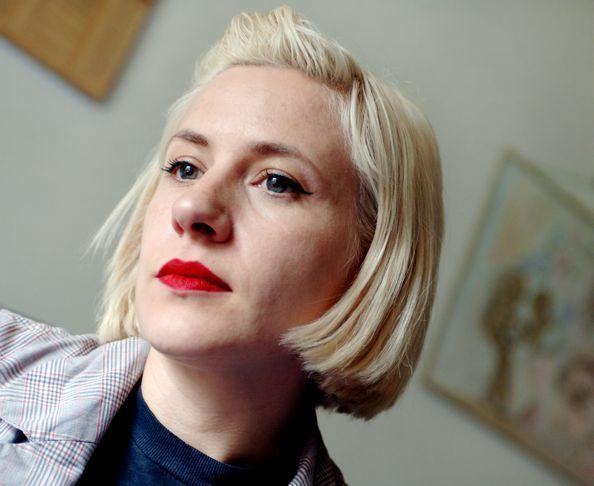 The creator of our lovely Cultural Maps on cider, gentrification - and wanting to smack a complete stranger in the mouth

Siân Pattenden is an artist, animator and author – and the brains behind our best-selling Kentishtowner Cultural Maps. A former music journalist, she now illustrates her own children’s books and has exhibited her art across London. She is married to musician Luke Haines, who we interviewed last week, and the pair have lived in NW5 for 12 years.

When were you happiest?
After two pints of psychedelic Cider Bus in the Southampton Arms, I’m generally in a wobbly mood. And wobbliness directly equates to happiness, it has been scientifically proved by Laboratoires Garnier.

Where would you like to live?
I like where I am. Although I am tempted to burrow inside Parliament HiIl sometimes and live in some sort of Art Cave. Daubings on the wall, raves at night, some sort of artisan bakery – it could happen. The council will be receiving my planning application soon.

What is your favourite sound or smell?
The sound of blackbirds singing about the smell of wet pavements.

What is your greatest life achievement?
In one single year I got a grade one ice skating certificate and another from Tiswas. That was a good year.

What is the most important lesson life has taught you?
Life is a cautious balance between having a good time and not being an idiot.

What is your earliest memory?
I lived in Evangelist Road for the first year of my life – but I don’t remember any of it. I think it would be odd if I did, though.

What makes you unhappy?
Words and phrases like “revenue stream”, “monetise”, “trending”, “page impressions” and “artisan” anything.

Who or what do you hate and why?
This mindless “gentrification” of – in particular – London, where the rich are seen as righteous and the poor are a nuisance. We are labouring under a modern morality that is insidious, almost invisible and cruel. I cannot stand the idea that people who grew up in an area now cannot afford to live there. It happened to my dad (who lived in Twickenham); it’s happened to some of my son’s friends’ families. Kentish Town must not become Primrose Hill. Surely the council can do something. This is where my Art Cave idea comes in. Let’s all live in the cave.

Where do you hang out?
When I’m not burrowing into the land, I wander around Kentish Town Road waiting for the Lidl to finally open its doors. I also hover round Blustons looking at the tops. Oh and the library is quite good a) for books b) for seeing the people do their thing. In my opinion there are not enough libraries in K-Town. There should be one long library on the east side of the High Street which incorporates a pub and the Citizens Advice Bureau. All one’s needs would be there. Then the other side could be one long artisan bakery or something.

What’s been your best experience?
I had quite a nice time at Alma Street Fair 2013 selling art and soaking up the smoke from the hog roast stall. I was standing next to you Kentishtowner guys all day and you weren’t too badly behaved, so that was OK.

What do you most dislike about your appearance?
Nothing, I consider it a boon to have come this far relatively unscathed. I still have all my own teeth.

What’s the worst thing anyone’s said to you?
Someone came up to me on the Heath last year, a complete stranger, and started to tell me how much she loved my “wacky” look. “Unlike all those yummy mummies,” she said. What if I had intended to look like a yummy mummy? How dare she. I wanted to smack her in the teeth – but violence is not the answer – so I just smiled and walked away.

Tell us a secret.
The world of children’s books is a viper’s nest. It’s the most competitive industry I’ve ever experienced, and I’ve met Simon Cowell so that’s saying something. Oh, and I was child actor and once appeared in Doctor Who for about ten seconds, shouting “Stop, stop!”

What has your career taught you?
Again, I don’t think a career is a “lesson”. I think of it more as a free-form Soft Machine jazz jam thing. To quote the indie bands of yesteryear: “If anyone else likes it [my career] it’s a bonus.” Also, “career” just puts me in mind of things that are out of control, i.e. “that motorbike is careering down the road.”

What is your favourite dish and why?
Baked potato and cheese. I just really like baked potatoes; I’m the most boring person in the world.

Describe yourself as an animal.
A greyhound, but a fatter-style one. Quite enthusiastic, but easily floored. I tried jogging on the Heath for a while once and I absolutely loved it – but my legs fell apart most times afterwards and I had to lie in bed all day. Although there’s nothing wrong with lying in bed all day.

We have just 19 copies of Sian’s Prince of Wales Road’s Map left in our online shop. To buy a limited edition print today use our special discount code POW at the checkout to get 25% off, a saving of £10. Offer ends Sunday, September 7. For more on Sian and her art head to her website here.