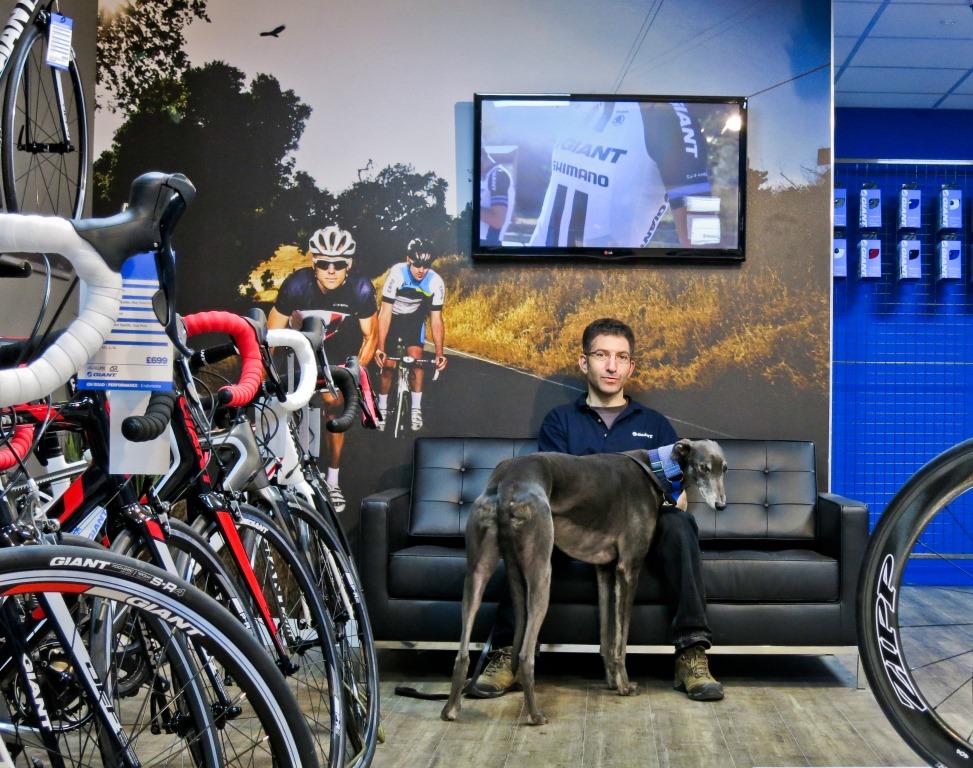 Earlier this year, much-loved lower Kentish Town Road bike shop Chamberlaine Cycles, which dated back to the 1950s, underwent a transformation. Emerging as the slick contemporary store Giant Camden, it’s still run by the same team with Nick Freilich at the helm, who has been there for over two decades. But it now boasts separate women’s and men’s sections, as well as a unique bike fitting system. We tracked Nick down to find out, quite simply, what started his two-wheeled obsession.

Tell us how you came to run Chamberlaine Cycles as it was.
I was in my early twenties, working in human resources, and made redundant during the 1991 recession. I applied for a cycle mechanic’s job as a filler, and turned up to this most traditional of bike shops on my custom-built racing bike. Owned by two brothers, Ted and Stan Chamberlaine, who were approaching retirement, the place was full of characters. I was the only cycling enthusiast working there, but I loved it. Stan Chamberlaine is an eccentric larger-than-life character and enthusiastic bicycle repair man of the old school: I shared his enthusiasm and became very fond of him in particular.

And so that’s how you started your career?
Not quite. I actually took the decision to return to study for my masters at Middlesex University, thinking that an HR career beckoned. But once I’d finished, about to marry and having spent my last £700 on a honeymoon to Tuscany, I needed a job quickly. I telephoned Stan and arranged to return to work for his son Steve who was then running the business. And to cut a long story short, after being given the job of setting up a new branch in Hatfield, I went back to Kentish Town Road to manage the shop with Steve. That was 20 years ago.

How did the Giant rebrand come about?
Although we had different ideas about the direction Chamberlaine’s should take, we always rubbed along quite well. But as time progressed, the business became more out of step with a rapidly changing market and increased competition from both the internet and modern chain stores. Steve was ready to retire, and the opportunity for me to buy the business and morph it into a state-of-the-art Giant brand store became a reality.

Let’s rewind: what was your first experience on two wheels?
I spent my first few years living care free next to green belt in Elstree, on the edge of London. Once I’d learned to balance on my bright orange Tornado chopper style bike, I had my key to freedom. I would take off across the fields and pavements and soon found that I could ride a circuit of 5 miles without crossing a main road. It was a voyage of discovery and independence. Uncharacteristically, my mum didn’t seem unduly concerned at my absence or stories of vast houses with French style shutters along the Barnet Way. That was probably my first step on a journey which has led to me to the point where I have spent most of my adult life riding and working with bikes.

Any bad memories?
Aggression from frustrated road users is a regular experience. I try to be a cycling ambassador and respond in a friendly manner no matter how I am feeling. It is important to diffuse situations as they arise and try to connect on human terms.

No horrific injuries then?
I’ve been lucky to escape anything too serious, although broke my nose aged five, and sliced my arm open, requiring surgery, mountain biking a few years back. I think these events may have involved a degree of showing off to friends. I think the penny may have dropped now.

What was your first (two-wheeled) love?
As a teenager I enjoyed touring through Europe. I only became interested in competing as a student at North London Polytechnic, but I think I lacked the motivation and talent to be any good. My rediscovery of mountain biking and endurance racing in the 1990s refuelled my enthusiasm for riding; to access those early feelings of discovery, freedom and fitness in a more challenging and sociable way. It did become a bit of an obsession, but I now have it more under control. It is, however, really hard when the thing that you love to do naturally produces loads of those feel good endorphins.

1. Shut up legs! Aching pins? Expect your limbs to ache and embrace that feeling. To quote German cycling racing legend Jens Voigt, “Shut up legs, do what I tell you”. He had this painted on his frame.

2. Hydrate
Not in the pub, folks. Unless you have earned a recovery beer, drink water little and often. For longer rides in the summer use electrolyte such as Nuun tablets to help re-absorb fluids and replace essential salts.

3. Is that a banana in your pocket?
Energy and potassium (anti cramp) all in a handy little eco friendly case. What’s not to like?

4. TFL website quiet routes
Use this useful resource to plan a quieter, safer, stress-free journey away from busy roads.

5. Connect with your surroundings
Ditch the ear phones, maximise enjoyment of the city using all of your senses.

6. Drop safety test
A handy check to test if something is loose on your bike. Before you set off, pick the back wheel up and drop from 2 inches (5cm). If you hear a rattle, something needs tightening. Repeat with your front wheel. Sort it out before you set off.

7. Light up
New rechargeable USB lights with LED bulb technology mean that you can stay lit up day and night. A super ‘bright’ option if you don’t fancy hi-viz.

9. Red light
Stop – just in case you weren’t sure?

10. Off road
Discover East London via the Regent’s Canal, a relaxing ride to Victoria Park and then through Hackney Wick and up the canal to Epping forest or Waltham Abbey and beyond.

11. Be a smile ambassador
Cab, truck, car, drivers are our friends neighbours and families. Be friendly considerate cyclists and you will receive better treatment in return.

12. Sneak a ride
Sit down with a cuppa and work out when you can “sneak a ride”: it doesn’t need to be an all-dayer. It could be part of a lunch break, a midnight excursion or an afternoon escape. You deserve it.

This is box title
Giant Camden can be found at 75-77 Kentish Town Road NW1 (two doors down from cute coffee shop, er, Two Doors Down). Its opening hours are Mon-Sat 8.30am – 6pm, and there’s currently a sale on offering 20% off on selected bikes.