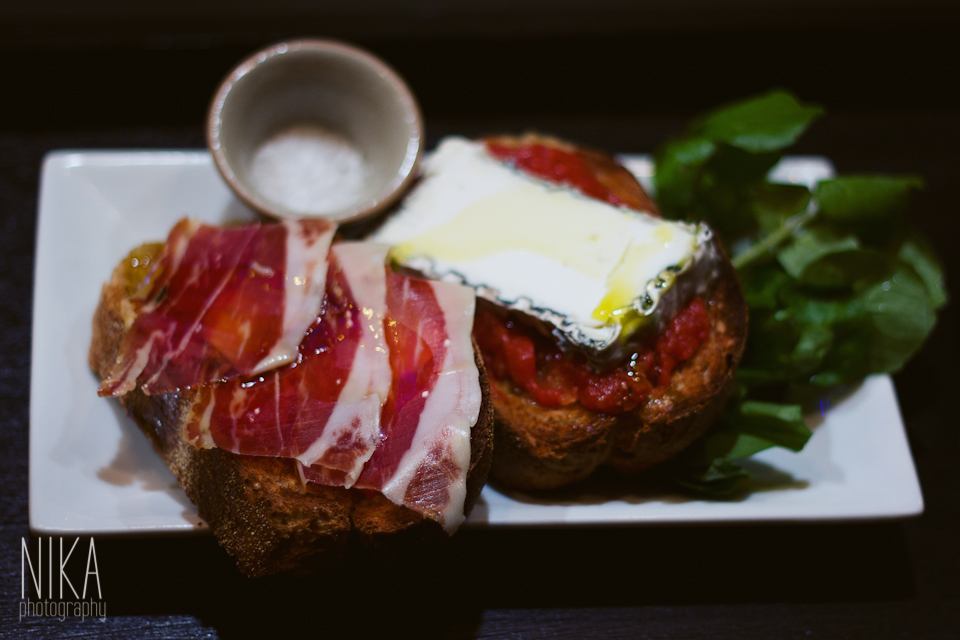 We are huge fans of “Tufnell Parkway” institution Del Parc. In fact, on our first visit less than 18 months ago, it was a genuine “why-on-earth-have-we-waited-this-long” moment. Especially as I’ve lived round here for nearly as long as Del Parc has been around: two decades, in fact.

Del Parc ploughs a decent furrow of innovation without descending into novelty or plunging any “theme restaurant” depths. Yes, beardy chef Steve Moorish works solo in a glass box kitchen in the middle of the tiny one-room space, but it’s fascinating and mesmerizing watching him chop, stir, fry. And, as much as anything else, the kitchen’s visibility is the result of practicality rather than the zeitgeist: the space is micro.

Late last year, Steve and his partner Alan, who works front-of-house, reworked the small front area of the restaurant as a Soho-style walk-in tapas bar. They invited us to check it out, which we finally did earlier this summer. But be warned: it’s (naturally) miniscule: a counter in the window seats just four, and there’s another behind, studded with Mexican tiling, seating a few more and surely rammed at weekends. Yet it’s perfect to linger, as we did, on a stormy midweek night, crisp white Manzanilla Argueso in hand, watching the rain pelt down, and passers-by scurry home.

Unlike the intricacies of the regular menu, served in the small dining area both behind and to the left of the kitchen, the bar offering is more about high quality produce sourced from what the boys call “the best suppliers”: so expect fine jamon and Spanish cheese, the fleshiest Gordal olives.

“When Steve gets a good ingredient he doesn’t mess around with it,” says Alan. Yet the emphasis remains on allowing the head chef to bring dishes “blind” (simply advise him on items you don’t eat); although there’s a bar menu from which you can choose, if you prefer.

Freestyling it, the ebb and flow of dishes as seductive as ever, it’s easy to eat more than intended, and yet the individual plates are light and slip down guilt-free.

For the oenophile there’s a good choice of wines by the glass or half-litre carafe chalked up too. A peachy white rioja matched several plates perfectly, while a pleasantly oily Vinlara Ruebero warmed up a slightly too chilled plate of cheese, which included Mahón and Manchego 1605, accompanied by olive oil crispbread.

The walk-in no reservations bar area is very much the spirit of the day, but being a neighbourhood restaurant, you can book the bar stools too.

So is it the best tapas bar in north London? Well, while there are plenty of others we frequent – Mornington Crescent’s El Parador or Pepito in King’s Cross, for example – we simply can’t think of another as special.

Never been? Watch this short film by photographer Nika Zbasnik (who also took the beautiful shots above):