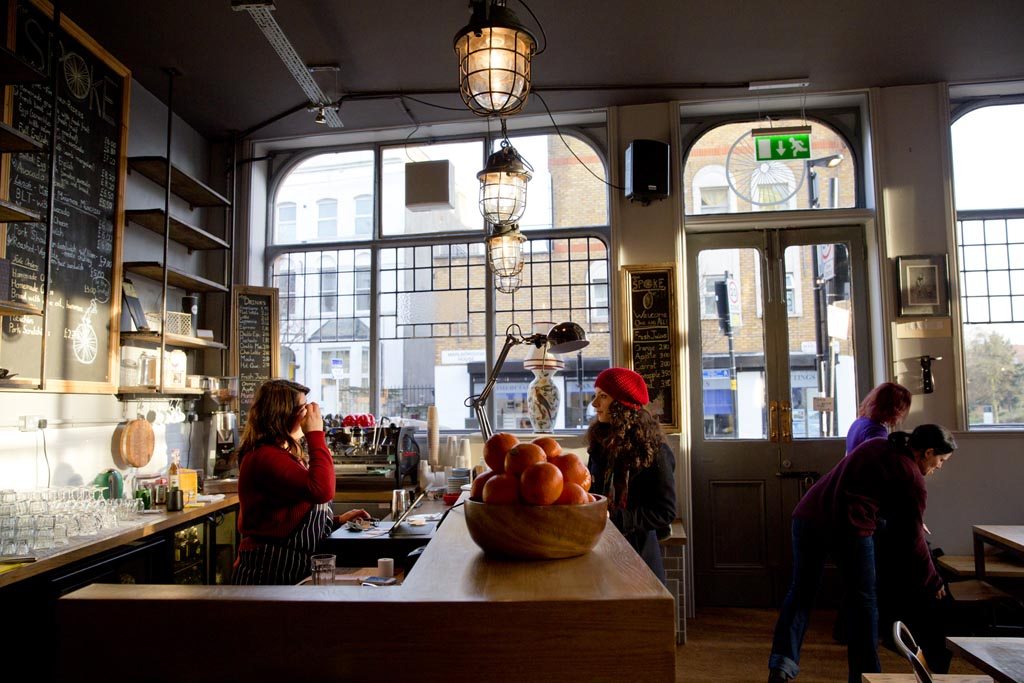 Right across London, spruced-up orange Overground stations inexorably bring with them a bloom of artisan coffee shops, start-up burger joints and the like. Such businesses now cluster and thrive around the orbital route stops, rejuvenating formerly desolate patches like our very own Prince of Wales Road, and ensuring a trip along the line will terminate in a culinary adventure.

The Spoke is typical of this spirit, sitting directly opposite Upper Holloway station (a blink-and-you’ll-missit three minute journey from Gospel Oak, in our case). Here, a down-at-heel boozer has proved ripe for tartingup and reinvention, undertaken by the same local team who already run Bread & Bean, Junction Road’s acclaimed coffee destination.

And the deceptively cosy, bar-room interior now looks ace. Carefully mismatched geek chic furniture and wonky art set off the open kitchen and giant airy windows a treat. Industrial shelves proffer sacks of coffee alongside beautiful jars and utensils. We could easily be in Kreuzberg, Berlin or Williamsburg, Brooklyn.

Of course, despite it only being a Tuesday lunchtime, we plough straight into cocktails, with the Marmalade – which sees a couple of teaspoons of the fruity spread combine with Brookers gin and Cointreau – the best, if geared towards a slightly sweeter tooth than our bitter old Venetian palates.

Accompanying these creations is a plate of nachos. This is often a dangerous choice that can end up as no more than an expensive way to eat supermarket chips ‘n dips. But that makes it a good benchmark dish (I speak as a guilty fan of the obscene nacho stacks of New Mexico).

Here, the home-made salsa and guac taste good, but still don’t manage to lift it memorably enough. Of the streetfood-inspired mains, pork shoulder sandwich and the house burger are both satisfying, but an overly grey patty in the latter and a disappointing butter lettuce and avocado side (curiously dry, thinly dressed and untossed) lack the fastidious attention to detail of the décor.

On a previous visit, we enjoyed the juicy little prawn po’boy burger with “Japanese” mayonnaise, and we’d return yet to plough through some other tempting menu treats, perhaps at a different hour for an alternative vibe. After all, it’s very much an all-day endeavour, with a decent range of posh cooked breakfasts around the £8 mark (poached eggs, chilli avocado and smoked salmon); not to mention a a proper selection of teas and soft drinks for laidback cake-fuelled afternoons.

Despite the cycling nomenclature, the lunchtime crowd is more pushchair than pushbike. Holloway Road’s nattering mummies have clearly been gasping for such a nice place to hang out, and are busy making it their own.

At one point, we witness a full scale buggie snarl-up. Five mums fi nish their group breastfeeding session and try to leave, just as another posse attempt to wheel their toddlers in. It’s Bugaboo gridlock.

Beardy freelancers, the other of The Spoke’s daytime tribes, momentarily peer up over their Macbooks at the commotion. But it must be a different scene in the evenings, when cocktails and unusual bottled beers dominate.

So the food is decent if not quite destination. Then again, it’s a neighbourhood joint, with coffee of a familiar high standard (Union blends, as at the Bread & Bean). Overall? The Spoke is a soaraway success, simply for bringing a touch of eating and ambient yumminess to a gritty stretch.