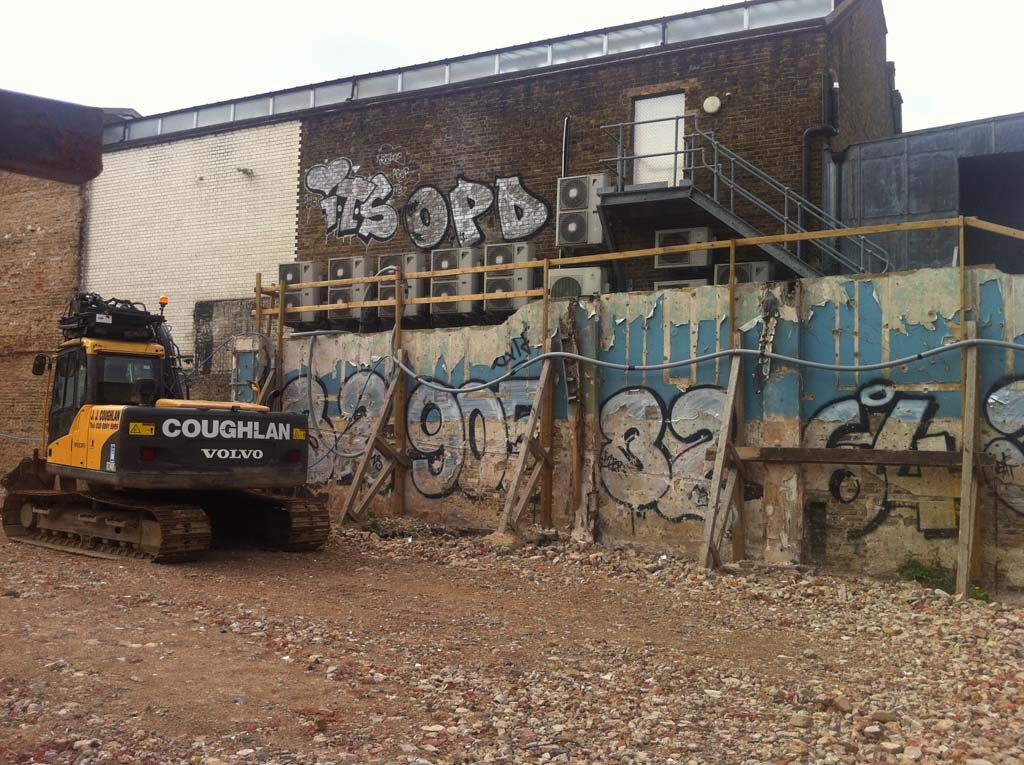 Take a look at these two piles of rubble. (Click on the image to see it full size.) Recognise that leafy Kentish Town junction, or that once-celebrated Camden Town corner? Until a few months ago, you could have enjoyed a cold pint inside functioning pubs at both these locations.

The picture on the left? That’s where The Gloucester Arms once stood, on Leighton Road. On the right? It’s the spot formerly occupied by The Crown & Goose, on Delancey Street, of course. All traces of both boozers have now been utterly erased from the local landscape.

When a property developer snaps up another of London’s dwindling stock of traditional locals, you tend to think of swanky flats occupying the bar room (as per the recent anodyne repurposing of the Prince of Wales or Monkey Chews).

At least that way the proud history of the building as a public house is maintained. Razing the whole thing to the ground feels like a whole other level of cultural vandalism.

And while former landmark boozers such as Kentish Town Road’s The Castle have narrowly swerved an appointment with the wrecking ball after public outcry, the reasons why such unpopular destruction continues to take place so frequently today are fairly complex.

Sometimes a pub – or at least the cherished in theory/avoided in practice ‘traditional’ pub – is simply no longer viable as a business. Other times it’s that the real estate is far more valuable with its imposing Victorian pile torn down and a flimsy glass and plastic structure thrown up in its place, often in the name of regeneration, a problem we know all too well.

Neither the Goose nor the Gloucester were particularly historic or beautiful buildings. The latter had actually been a notorious flashpoint for Fascist activity over the years. As recently as 2010, gunmen shot out all the windows in protest at regular gatherings of a neo Nazi group there. Charming, on so many levels.

Meanwhile, the Crown and Goose had only really been operating as a pub for a few decades, becoming renowned as one of the original places to experiment with a quality food menu at the start of the gastropub revolution. Despite profitability, plus plenty of local love and support, it wasn’t possible to play the heritage card to save this once-atmospheric hostelry.

It’s difficult not to be moved when a whole slice of our environment changes so dramatically, but why do we collectively wince that little bit more when it’s a pub that’s turned to dust?

Is it the erosion of our community gathering places? Mourning cherished memories of the tanked-up good times? An irreparable loss of our cultural identity? Or just an unwillingness to to comprehend the pace of change?

At least the Gloucester’s nearest neighbour, The Torriano, is soon to open again as a proper pub, regaining its original name too, the Rose and Crown. No doubt we’ll hear moans about pricey craft beers and gastro-isation, but a look at the photos above shows the other option.

And next week, the latest hearing over the Bull and Gate goes before a planning committee. Let’s hope everyone involved makes a concerted effort to agree, and get the pub open again by the autumn. The alternative? Unthinkable.