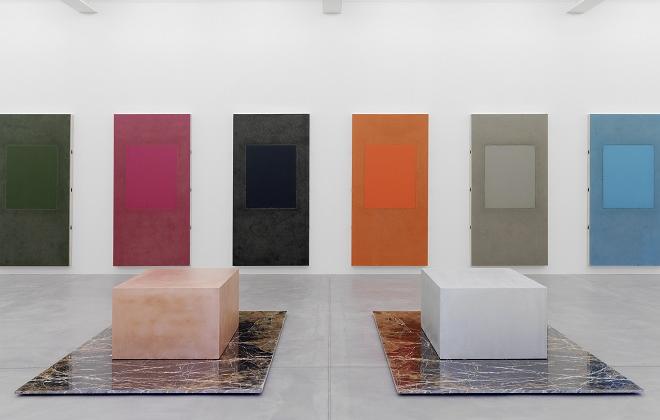 Late June already? Why, it must be time for north London’s finest creative spaces to show us what they’ve got over the balmy months.

And where better to start than former Methodist Chapel, the Zabludowicz Collection, where four young international artists are about to present solo exhibitions?

Adriano Costa, Sam Falls, Samara Scott and Michael E. Smith will all be pondering the question of how to make sculpture today. Here’s no more than a few words on each:

1. In the back room, Samara Scott‘s High Street lifts sensations directly from the daily flow of images that surround us, addressing, she says, our “contemporary experience of the body”. Most impressive are her object-encrusted glass panels.

2. Meanwhile, through an approach which he compares to the rhythms of music, Adriano Costa composes shapes and textures in the middle room to explore the distinction between the “throwaway and the precious”: more than epitomized by his two black umbrellas against a wall (above, centre back).

4. Photography is the core of Sam Falls’ practice, which occupies the main room. He expands this focus into sculpture, painting and video, but expect large-scale sculptures in copper, marble and coloured aluminium. Upstairs, particularly haunting is the Final Forever video series, coupled with unsettling snippets of Velvet Underground songs.

1. Cob Gallery: we love artist Miriam Elia, who found herself in a bit of hot water after parodying Penguin Books’ Ladybird series earlier this year. See what the fuss was all about at the group show Parody, Pastiche and Satire, until July 5. 205 Royal College Street NW1

2. DRAF: A Special Arrow Was Shot In The Neck, the seventh edition of the gallery’s Curators’ Series curated by Natasha Ginwala and Vivian Ziherl, continues until August 2 and brings together works by artists, designers, poets and choreographers from India, Indonesia, Australia and Europe. Symes Mews NW1

The four shows launch tonight 7pm at Zabludowicz Collection, 176 Prince of Wales Road NW5, and run until August 10. There are numerous free talks, tours and events every weekend. Have a look at them here