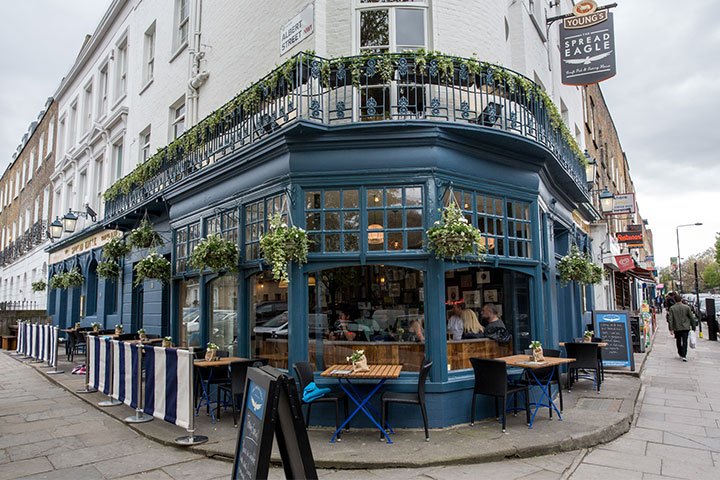 Leafy Parkway has got to be one of London’s best people-watching thoroughfares. Its sun-dappled pavements neatly segue the tranquility of Regent’s Park at the top, with the buzzy urban throng of Camden Town tube at the bottom.

It’s also choc-full of pubs which appeal right across the boozer spectrum: the Dublin Castle bags the indie crowd, while York & Albany attracts the cocktail-sippers, and Earl of Camden the blow-ins and footie fans.

Meanwhile, the Spread Eagle, dating back to 1858, has always been the most picturesque corner to linger with a pint, sidling up, as it does, to handsome Albert Street. It’s owned by Young’s and has just had a decent – and sympathetic – refit.

This is of particular interest for NW5-watchers, of course, as the brewery controversially last year bought Kentish Town’s beloved Bull & Gate, currently blocked from reopening by disagreements over its planned refurb. So, we accepted their invite to have a butchers at the interior as well as sample the new gastro menu on a quintessentially sunny Parkway lunchtime.

And first impressions were good. Original wood panelling has been stripped back to create a more natural colour scheme, and a choice of deep and luxurious seating options lie scattered about invitingly, with breakout spaces opened up for the first time in decades. These constitute two private areas upstairs, both well-stocked and kitted-up for eating, meeting or partying.

The best spot in the house remains the vast ground floor bay window, right on the corner of the junction, but seeing as the sky was the deepest blue, we opted to eat at one of the popular al fresco tables.

Judging from our starters, even the most curmudgeonly locals should be won over when the Bull & Gate finally does reopen. A serving of beetroot and Sipsmith gin-cured salmon here was a delectable treat, pickled radishes offering a further boozy twist to accompany the orange-ruby fish. Also to start came a doorstep hunk of smoked ham terrine, a more-than-ample bar snack in itself, and well priced too (£5.50) for the obvious quality of ingredients.

You can obviously work your way through Young’s own ales, such as London Gold, Twickenham Redhead or Blonde, but we chose a chilled Côtes de Provence to slip further into sunkissed Mediterranean mode. And all the while, the passing tide of office workers and tourists moved harmoniously, at odds with the usual argy-bargy of Camden’s main drag, just moments downstream.

Predictably, the pub now does the sharing platter thing, an easy option for tourists, the 9 to 5 crowd, and those heading en masse over to a gig at the Dublin Castle afterwards. The Camden Market board (£16) is a nod in the direction of all these tribes, offering a populist selection of sliders, Camden Brewery Hells-battered onion rings and tasty homemade relish. Buttermilk fried chicken was our favourite, light and juicy in the sweet brioche bun. The burger suffered – as often the case with sliders – with simply being too compact to be cooked any way other than well done.

Most impressive, however? A main of lemongrass and chilli-crusted cod, sitting plump on fennel and scattered with pomegranate, another of the chef’s piscatorial success stories. He’s definitely a fish man, we concluded.

Despite a mix-up with the desserts, rhubarb and lemongrass fool and a rich slab of dark chocolate terrine both prove to be well executed sweets, if less dazzling than their savoury predecessors.

A key reservation casual commentators have about the proposed new-look Bull & Gate is the loss of its music space, which Young’s plan to turn into a dining area. Yet while we mourned the closure of the live venue as much as anyone, if that’s no longer an option in a building – if, say, the sole alternative is a development of flats – we defy anyone not to be pleased with a careful reinvention. In 2014, isn’t such a route most often the only way of preserving a pub as a pub, a fact driven home by a glance at much-missed Parkway neighbour The Camden Stores, now glowing orange as a Masala Zone?

Overall, the dining experience and none-too-cheap reboot certainly convinced us that Young’s have their hearts in the right place when it comes to updating their historic boozers. And who wouldn’t want a little place like the Spread Eagle at the end of their road?

To receive news of the reopening of the Bull & Gate, sign up here