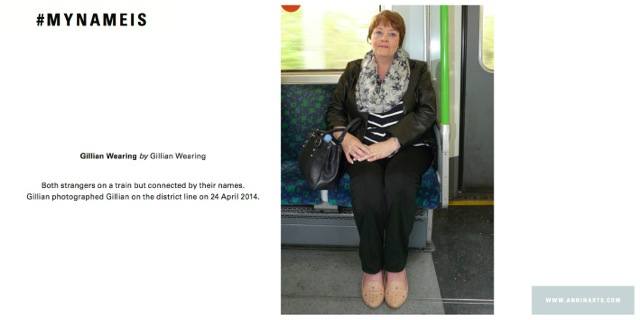 We know you lot like free. And we’re pretty fortunate that almost every gallery – both round here and across London – charges nada.

But striking public art is something else. Who can forget, for example, Giancarlo Neri’s sculpture, The Writer, a 9-metre tall table and chair poised on Hampstead Heath back in 2005? Or Jeremy Deller’s Stonehenge, the inflatable work that flitted around the world during the Olympics? Or this year’s Bus Stops by Juergen Teller atop shelters along The Strand? And the Gormley figures on the Roundhouse roof (and dotted elsewhere around town) are always striking.

From tonight a new public exhibition lands in both Camden and beyond that aims to make passers-by look up from their phones and pause to think. Called #MYNAMEIS it promises to investigate “the importance of names, the perception they give and the burden they may carry”.

The show consists of five works, each located on a billboard in various locations throughout the capital, by artists Nastasia Alberti, Duval Timothy, Kevin Morosky, Annie Mackin and Turner Prize winner Gillian Wearing.

While the work is scattered north, south, east and west, if you’re pressed for time make sure you at least cop a load of Annie Mackin’s billboard (see main pic) at Camden Road Overground station (perhaps with a spritz afterwards at Casa Tua). But if you’re not at the CC14 festival, or dozens of other outdoor events this weekend, why not consider zipping around on the tube between all five?

Here they are, complete with exact locations:

Kevin Morosky’s piece raises questions about race, perceptions, and stereotypes of race and immigration, exploring how we judge a person based on names and appearance.

Duval Timothy wore a bespoke suit in the colours and pattern of the Arizona state flag as he walked across London Bridge in London during the morning commute.

Nastasia Alberti’s subject is Karley Sciortino, an American journalist who writes for Vogue and helms the Slutever blog. Her piece makes observations on names, image and sexuality.

Annie Mackin – confused for years with DJ Annie Mac – painted a triptych with three canvases symbolising two decks and a mixer. Colours used in the two deck canvases co-exist in the middle mixer canvas, grappling with each other for dominance.