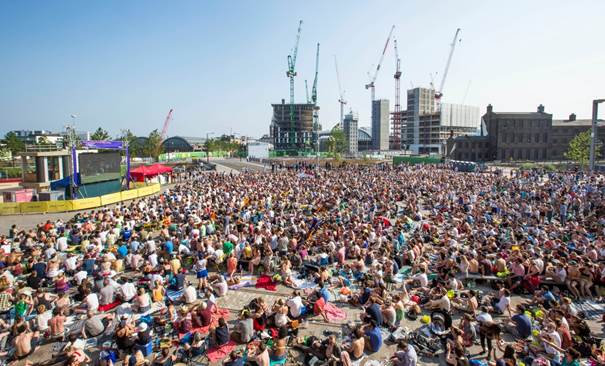 Every time we cover an opening or event in Granary Square, that European-style piazza just a fifteen minute wander along the Regent’s canal, it seems you lot love it. In fact, our story on the great King’s Cross flower giveaway was one of the most popular items in recent months.

Next up for the newish public space is Wimbledon 2014, and what the organisers are neatly calling “Strawberries and Screen”. Ahem.

Last year, a crowd of four thousand squished up closer than close to watch Andy Murray scoop victory. And this summer the experience promises to be even better: the screen is now a whopping four by four metres, the first fifty visitors can grab a free deck chair, and picnics – not to mention a heaving punnet or two of strawberries – are actively encouraged. For the less organised, a pop-up Green and Fortune Café will be on hand dishing up sandwiches, jugs of Pimms, beer and soft drinks.

And speaking of food, expect a whole raft of new openings kicking off this autumn. First up is Dishoom, the Bombay café with branches in Shoreditch and Covent Garden. This latest addition occupies a 9,000 sq ft former transit shed, originally used in the 19th century to house horses to move goods and wagons around the Granary complex. On brand new Stable Street, it’s the largest restaurant opening at King’s Cross so far. Yup, even bigger than the cavernous Caravan.

If you’ve not been to Dishoom, menu-wise it’s all biryani, grilled chops, prawns and kebabs, with plenty of small plates thrown in. Lashings of chai tea for the afternoon and cocktails for the witching hour too.

Other new openings to look forward to? Well, the deals haven’t quite been inked yet but rumour has it that a gastropub run by the Cubitt House group (posh Belgravia outfit) will occupy the three-storey canalside complex called the Pavilion (left), and another branch of Camden Town tea room Yum Chaa is also on the cards.

Also pencilled are Kimchee (from the founders of the Wasabi), Bakaliko, a Greek cafe from Theodore Kyriakou (the man behind The Real Greek), and launches from both Jamie Oliver and D&D London, the bunch behind Le Pont de la Tour and Quaglino’s.

Naturally, we’ll keep you posted. But first: anyone for tennis?

This is box title
Strawberries and Screen starts on Monday June 23 until the men’s final on Sunday July 6. Free. Main BBC coverage only, closes 8pm, unless a key match is in progress. Dishoom opens this September on Stable Street N1C