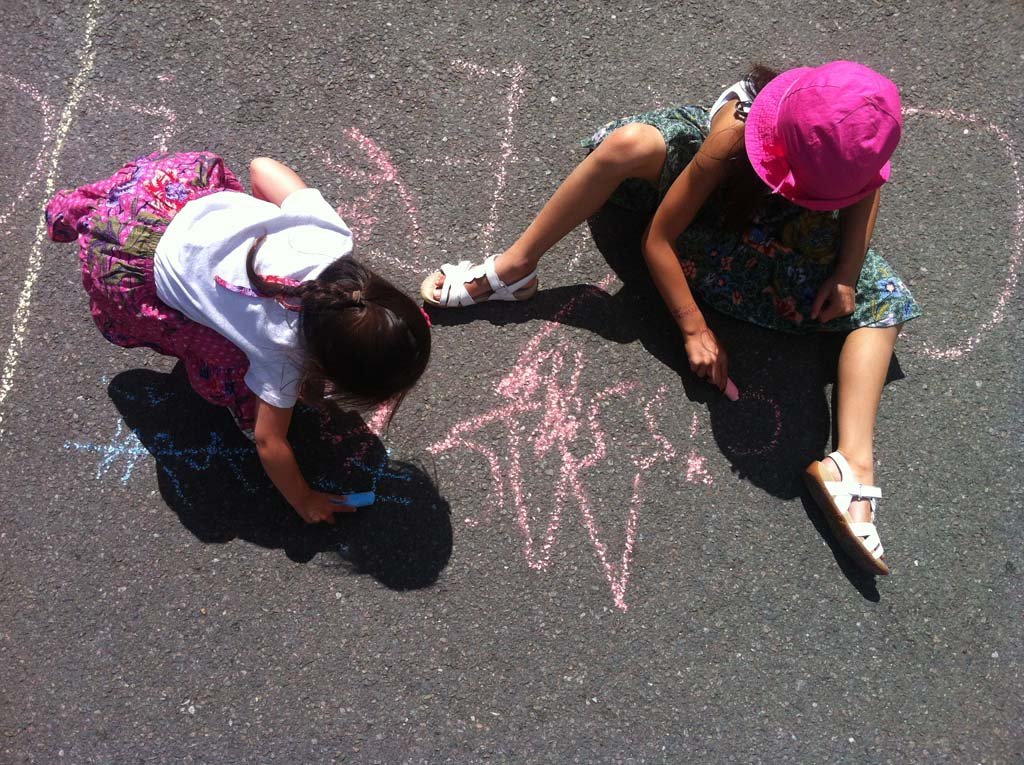 A new initiative for Kentish Town sees cars barred, and simple family fun spill out into the street

A young child crawling in the middle of the road, a giant water fight, a baby attempting hopscotch, the sound of chatter instead of cars.

There were many unexpected scenes on Ryland Road in Kentish Town on Sunday. It was the first ever Inkerman Area Playing Out session, and proved to be a lovely way to wile away an afternoon.

The idea is oh-so-simple. Close the street to through-traffic for a few hours, leaving the space for children to play out freely and for neighbours to spend time together.

Apart from seeking the authorisation from a (very supportive) Camden Council and finding a few volunteers to stand in hi-viz jackets at each end of the road redirecting errant cars, nothing was planned.

And children truly need very little to have a fabulous time. Give them some pieces of chalk, a few hoops, some water and a collection of new friends, and you can stand back and watch endless play unfold for the whole afternoon.

The Playing Out movement started five years ago in Bristol, when mums called Alice and Amy wanted to give their children a safe space to play, close to home. They brought Play Streets back to life – legislation dating back to 1938 allowing residential streets to be closed to cars, for children to play. The Playing Out team are now inspiring and supporting families across the UK to do the same, with great success.

This happy K-Town trial succeeded in transforming our street from a place where we are simply hurried passers-by, into a friendly space where one takes the time to meet, talk, smile – and of course, play!

The sun came out just in time, as did thoughtfully-provided popcorn, ice lollies and watermelon slices, passed around by the neighbours. A hose with a spray attachment proved the big hit, setting off a New York block party vibe, with kids running around squealing in delight under the cooling jet.

After this resounding success, more sessions are being planned for our roads soon, and hopefully Play Streets will be sweeping cars aside in other parts of Camden in the very near future.

Contact us at playstreetsNW5@gmail.com to be informed about upcoming Playing Out sessions, or to find out more about starting one in your street.
More info on the Playing Out movement, including fabulous resources can be found here.

1 thought on “Playing Out: the day kids ruled Ryland Road”

1 thought on “Playing Out: the day kids ruled Ryland Road”