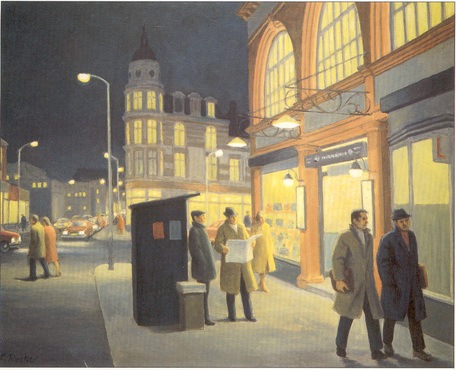 We all know Tufnell Park is “on the up”. But a new half hour doc, A Walk in the Park, is a simple, unpretentious journey into the “lives and stories behind the faces we pass in the streets”, says editor Jonathan Cronin.

A collaborative project funded by the Community Development Foundation, it was made by a group of volunteers, some experienced film makers, some not. Surprising and often funny, it’s an addictive glimpse beneath the surface of an eclectic corner of north London. “We found local people to interview and tried to put together a portrait of the neighbourhood as we see it today,” says Cronin.

Highlights? Saira and Rani from Joginder’s Supper Club talk about their family’s 40-year association with the area, as well as the genesis of the now popular weekly farmers’ market; while PJ Fahey, general manager of the Boston Arms, describes a typical day at his pub, from drinking to bands and boxing. And local journalist Andrew Whitehead is on hand to guide us through the recent gentrification of Fortess Road.

Other interviewees include charismatic Tony from the Singer Sewing Centre, who has spent 35 of his 45 years in the UK in the same shop, and St George’s Church vicar Melanie Toogood on her eclectic congregation, where accountants might sit next to “people who’ve just come out of dark places.”

Elsewhere, there are black and white photographs of war damage to the Odeon when it was hit by a V1 bomb in 1944, the story of the atmospheric Fermin Rocker painting, Newspaper Kiosk, Tufnell Park (pictured above), a visit to a ukelele night at Hilldrop Community Centre, and manager Tim Farrell on the success of Aces & Eights.

Finally, expect plenty of gratuitous shots of cycling up and down Fortess Road, commuters fiddling with smartphones outside the tube, and the attractive flower stall. It’s a pretty good way to spend thirty minutes of your time – so if you like it, share it.

This is box title
For more on Reel Islington, the community film organisation, head here