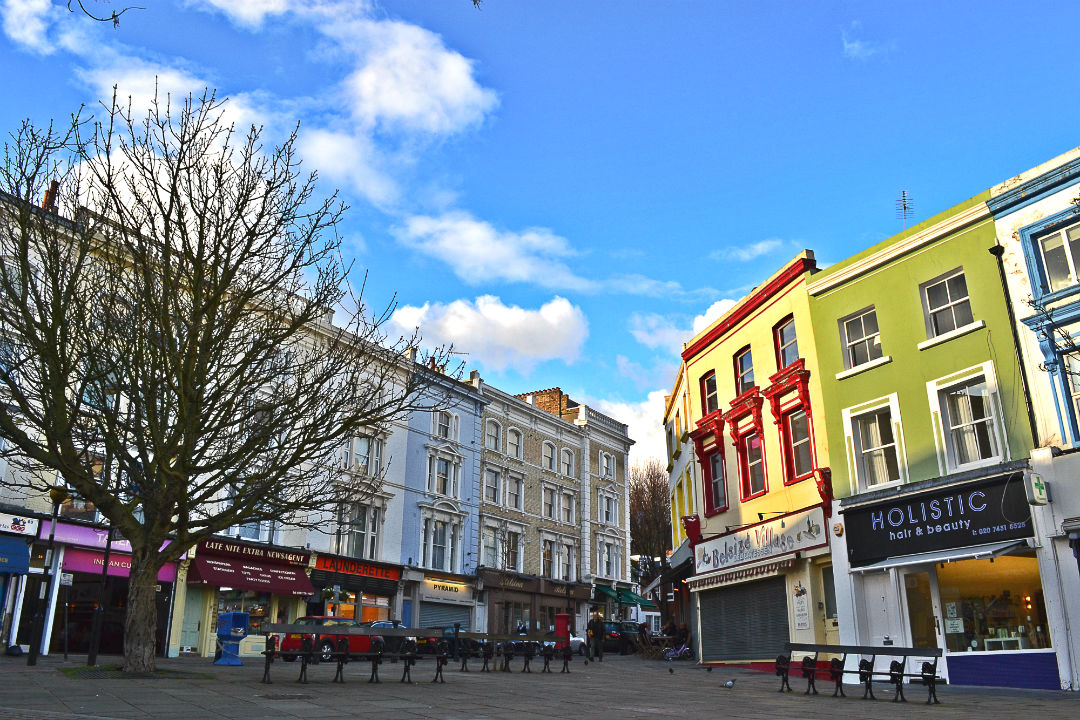 But stop, for a second, and glance at this large swathe of NW3 again. Did you know, for example, it means “beautifully situated”? And that it was first recorded back in 1317? For many centuries, the area’s focus was swanky Belsize House, rebuilt several times until it was pulled down in 1853 (it’s now a walled-off enclosure of eight houses, Village Close).

And this stately past still informs the present in its European feel, home nowadays to a wealthy international (including large French and American) population. It is, perhaps, the closest you’ll get to feeling like you’re en vacances – while being a mile or two from home.

The main thoroughfare is Haverstock Hill, and it’s on or off here that most of the action takes place. There are four key areas. Why not loop through each this bank holiday weekend and make a day of it?

What? The bit where the hill plunges down to Chalk Farm (regard the view over the city!) and, to the left, Kentish Town.
Coffee: Legal Cafe has a road-facing terrace that’s good for people-watching.
Booze: superior cocktails at The Hill, or rowdier sessions at legendary boozer Steele’s, where there’s always an eclectic crowd as well as weekly comedy and live music nights (though it’s not the truly bohemian pub it once was).
Eat: Oliver’s for posh fish ‘n’ chips, decent sushi at Akura, Persian specialities at Tandis or on-trend steaks and fish at atmospheric US-style brasserie The Hill.
Note: Sir Richard Steele was an early 18th century writer who lends his name to both area and the eponymous boozer.
This is box title

What? One of the older byways of the area, dating back to 1745.
Coffee: Black Truffle. But you’re spoilt with the excellent Ginger & White and Cinnamon too.
Booze: The Washington, an attractive and once-hip Grade 1-listed corner boozer relaunched this week with new speakeasy basement bar.
Eat: Black Truffle for shared plates of charcuterie, or Ginger & White for stylish boozy lunches. Retro Italian and Indian restaurants aplenty too.
Note: The excellent butcher’s, Barrett’s, has been in the biz since 1860s. And the
decorative shopfront of the pharmacy at No.28 has remained unchanged for a century. Living in Space is handy for posh interiors purchases.
This is box title

What? The main drag, with its continental pavement terraces and oxblood red tiled tube station.
Coffee: it’s quite chain-y here, so try Gail’s or Euphorium after a rummage around Daunt Books or ace deli Pomona.
Booze: The George, a once-famous tea garden dating back to 1715. Secret beer garden out back too.
Eat: Chez Bob for a £10 two-course set brasserie menu (before 8pm, daily), Jamon Jamon for tapas, Weng Wah House for upmarket Chinese, or Chez Nous for retro chicken kiev and chips in a “Parisian” interior. Too tipsy to walk home? Try the Haverstock Hotel, a stylish new boutique B’n’B, which also boasts acclaimed restaurant Ballaro (reviewed here).
Note: the tube became an air raid shelter in the war (see the entrance just before the corner of Downside Crescent). A “deep shelter” was also constructed here which ran for over a quarter of a mile. Also worth a visit is the plush Everyman cinema, and WAC Arts centre in the Italianate splendour of Hampstead Town Hall.
This is box title

What? The cute bit where Ornan Road becomes Belsize Lane. Think pastel terraces and community spirit. Kind of. Paved area with benches to sit and soak up atmosphere.
Coffee: Roni’s Bakery, the bagel shop buzzing on a Saturday morning. Great alfresco too.
Booze: the only pub became swanky restaurant XO, chucking a bit of West End glamour at the Village. But you can drink in the bar.
Eat: lots of choice, from smart Greek (Retsina) and cosy Turkish (Beyoglu) to Indian (Hazara) and modern British (the Belsize Kitchen).
Note: it’s not that old, alas, only dating back to the mid 1850s.
This is box title

Don’t miss too the former artists’ quarter. Yes, remarkable as it may seem now, during the late 1920s and 30s the eastern corner of Belsize Park was a hotbed of artists, all dotted about in the Mall, Parkhill Road and, from 1934, the concrete, functional Isokon, the Grade I-listed iconic modernist building on Lawn Road. Dutch minimalist Mondrian moved into a room (at 60 Parkhill, see the blue plaque still there) overlooking the studios in 1938. Sculptor Barbara Hepworth, who lived in nearby Mall Studios with husband Ben Nicholson, described how “his wonderful squares of primary colours climbed up the walls”. And the poet Sir Herbert Read – who lived on the terrace too – enthused that the neighbourhood as like the “artists of Florence and Siena…in the Quattrocentro, a nest of gentle artists.”

Have you got a Belsize Park tip? Leave it below…