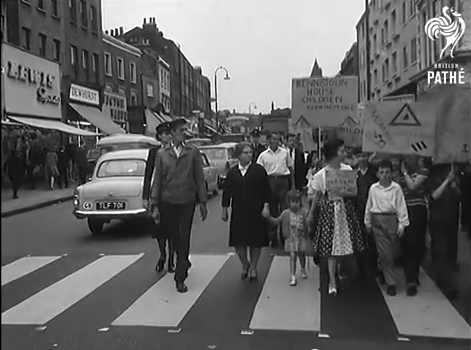 That’s just one catchy slogan emblazoned on a protest sign in today’s Monday Video, a fascinating newspiece from 1962. It shows locals petitioning for a zebra crossing and is one of thousands of newsreels that British Pathé has just uploaded to YouTube (if it doesn’t load correctly, you can watch it here).

The short film tells how, after a five year old has been knocked down, one Mrs Pat Sullivan, “mother of three”, ropes in hundreds of mums and kids from Torriano School to make their way to the police station on Holmes Road. Why? To deliver a petition for greater road safety – in very British fashion.

Look closely and there’s some fine period detail: megaphones and bobbies on the beat; apron-clad shopkeepers standing outside their grocery stores; the Assembly House on the corner looking rather slick, railway lines opposite; the high street chocka with double deckers and old Alfa Romeos; and the polka dot dress (from Blustons?) on Mrs Sullivan herself, who also carries a sign which reads – a little inexplicably – “I’m Gina and I go to Torriano School”.

Throughout is the brilliantly RP voiceover, commenting on “the little chap now recovering in hospital”, it being “the fashion of the day for anyone with a cause to sit down or march”, and plaid-clad boys sitting down outside the police station on Holmes Road “in the best modern manner” – and waving furiously at the camera.

Were you there? Tell us how it was below…

This is box title
Got a short film about the neighbourhood, or indeed north London? Email us at info@kentishtowner.co.uk