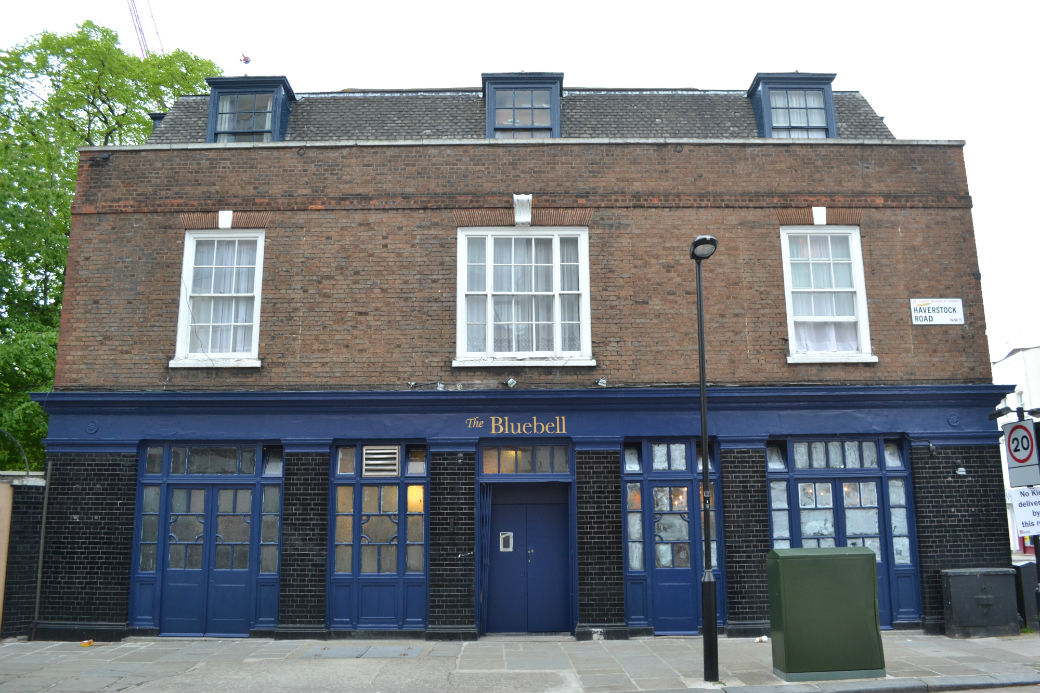 Westport Inn reborn as The Bluebell

The longstanding Irish boozer on Malden Road has reopened as a craft beer bar. And we've had the first peek inside

If, like us, you regularly traipse up and down that sloping thoroughfare, Malden Road, you’ll appreciate the refreshment options are a little limited. But did you know a century ago it was a thriving shopping street, complete with trams to South End Green and back?

Anyway, at least the three remaining hostelries have long been lively haunts: the earthy and increasingly hip Fiddlers’ Elbow, on the corner with Prince of Wales Road, hosts live music most nights, while the Robert Peel, adjoining Queen’s Crescent, is always thronged with locals. Just up the hill, the emerald green Westport Inn was the cosy Irish alternative for two decades, and home to many a Saturday night karaoke party.

And now it’s reborn as a more contemporary craft beer pub, The Bluebell. Known for over a hundred years as the Gipsy Queen, a boozer has occupied the site since the 1850s, although the current building in fact only dates back to the the 1930s.

Current owner Thomas Browne’s parents took it on in in 1991, renaming it after their hometown in County Mayo in the process. “At the time there were bare knuckle fights in the cellar,” he says, “and the owner was so scared he allowed his Alsatian to roam the building.” Ouch.

But Browne’s father managed to turn it into a traditional neighbourhood favourite for 22 years, until it closed for refurbishment late 2013. And so why the new moniker? “It’s simple,” he says. “The bluebell is one of my favourite flowers, but it also creates a softened identity, contrasting the harder edges of the previous name.”

Thomas explains how he and his team faced “quite a task” in trying to bring a 1930’s pub into the 21st century. “It lacks the Victoriana charm of our neighbours, and was essentially a big box, with a huge counter and pretty bad toilets. Our redeeming features were immaculately kept macro beers and a pretty-ish bar.”

When we swung by last night, there was still plenty of work to be finished in the interior (by architects Linedota); but it was coming along nicely. There mood is long black banquette seating, upcycled chairs, bare bulbs, and lots of “architectural salvage”, plus an open kitchen with dining tables at the rear.

Along one wall is a mural by students from Central Saint Martin’s: “Gospel Oak as it used to be,” says Thomas. The food offering is still being finalised but promises to be loosely Mediterranean, with the emphasis on tapas and small plates. But the real focus for now is craft beer: there’ll be a rotating choice of twelve on draught, including Schiehallion, Bitter & Twisted, Brooklyn and top English pale lager Freedom Four; plus fourteen bottles, from the award-winning Northern French blonde beer Bellerose to the trappist Orval.

Artisanal spirits like Sipsmith line the back bar, and there’s a comprehensive wine list too. Future plans? Sunday folk jams, DJs playing “relaxed electronica”, a refurbed garden out back in time for summer, and boutique hotel upstairs with eleven rooms. Not unambitious, in fact.

“Things have changed substantially,” he says, “and we earnestly hope the changes have improved our venue to the benefit of our loyal customers, as well as the community as a whole.”

The Bluebell is open “softly” – we’ll keep you posted on the official launch. Beers from around £4. Find it at 166 Malden Rd, London NW5 4BS

7 thoughts on “Westport Inn reborn as The Bluebell”

7 thoughts on “Westport Inn reborn as The Bluebell”