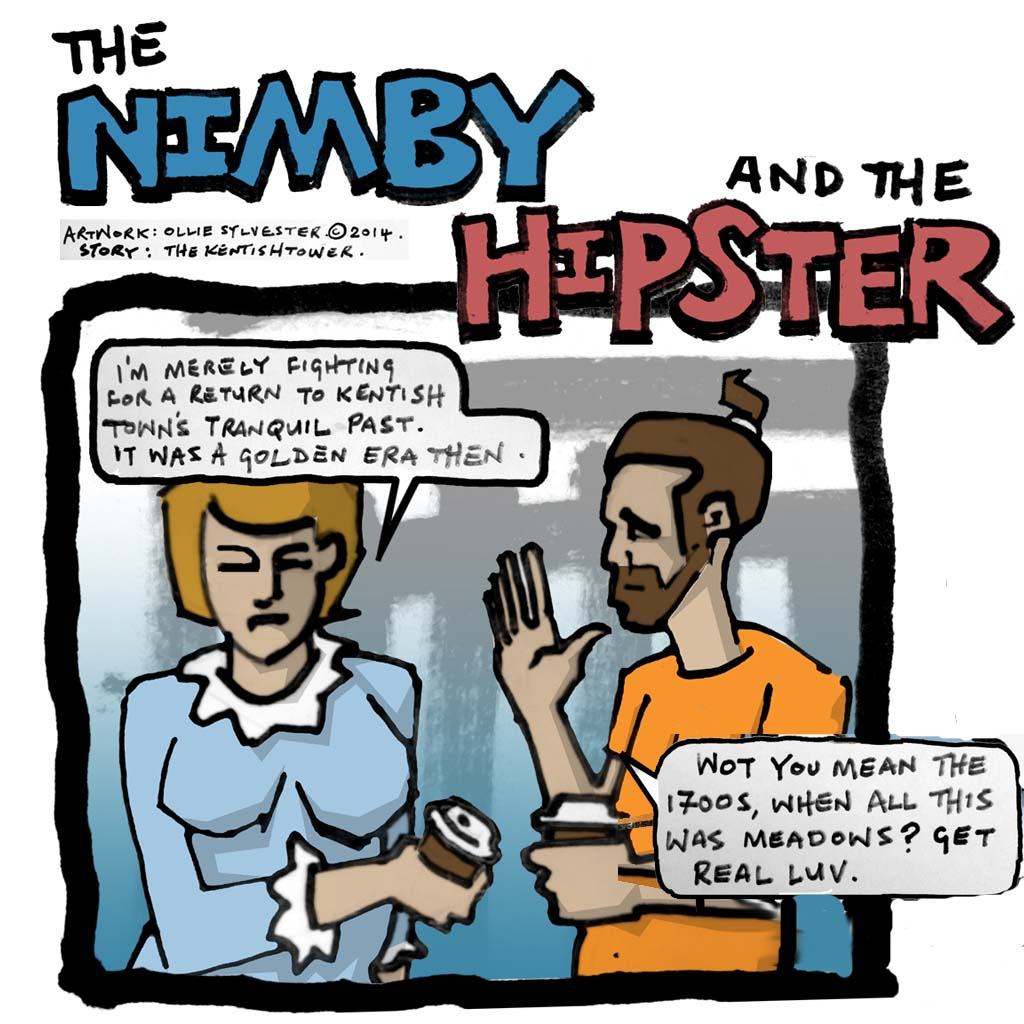 Serial objectors often carry more weight than supporters of thriving local businesses. But does anyone really have ownership of the area they live in?

Everyone likes to see their neighbourhood improving. A thriving, independent high street with busy pubs and a mixed community are all prized assets, as is the wealth of cultural options. That’s why we even live here at all, right?

Sure, none of us are immune to a good grumble. Living cheek-by-jowl with tens of thousands of others is never going to be idyllic. But over-objecting, the preserve of the infamous nimby, has the very real potential to damage all that’s good about living in a city. And it’s something that’s on the rise – everywhere.

So, what is a nimby? Coined in 1980, this acronym simply means “not in my back yard”, and refers to city-dwellers who see it as their mission to go about lodging complaints and blocking licences. The suburban zeal of a few such disproportionately powerful voices can make a decent stab at extinguishing flourishing cultural hotspots.

But would anyone really still fight for such restriction if it also directly leads to boarded-up shops and rundown listed buildings? Apparently so.

Over recent weeks a curious saga has been playing out in Kentish Town over local lad William Borrell’s plans to turn derelict public conveniences into a subterranean cocktail lounge.

The decaying toilets (main pic, and left), at the junction of Highgate and Fortess Road opposite the Forum, have been closed since the 90s. And yet objections being publicly lodged are mostly misplaced: “people hanging around smoking cause obstruction and noise”, “rowdiness and late night brawling”, “urinating”, “drunk people on the very corner of an extremely busy intersection, with bus routes on both sides”, “we need toilets, not bars” and “someone might run across the road without looking when buying cigarettes”.

All this from residents who already live next to The Forum – to someone pouring investment into an otherwise abandoned and grubby blot on the main drag. Isn’t it a knee-jerk over-reaction based on an outdated idea of debauched late night drinking?

Our area attracts many creative entrepreneurs who have correctly seen the opportunity to build successful businesses in retail units previously unloved for years. But for how long will they bother?

Just across the road from the toilets is the famous Bull and Gate, which sits empty into a second year over disagreements as to what is considered an appropriate refurbishment for its listed Victorian interior. There’s a real danger it might never open again, despite having Young’s, one of the UK’s most trusted breweries, keen to revitalise it with a £1.5 million spruce-up. (See box below to be kept up to date with their progress).

Anyone who has actually witnessed the passion and attention to detail in both would attest that neither are going to turn out a drunken army of vomiting revellers. But still they endure censure from the vocal few, instead of praise for world-class innovation and financial injection to the area.

Tell us your story? I moved to Kentish Town and got lucky – spotting an ad to work on the concept for a new bar just down the street. I was gifted a bottle of illegal Irish Potin from my father for getting the place open, which lead to us becoming London’s leading specialists in the legal version of the drink.
Describe your bar? It’s an upmarket locals bar where people can come and relax with a good drink, away from the hustle and bustle of busy pubs.
What should we drink when we visit? Potin! Especially Ban – our very own brand. Let our educated bartenders be creative and do what they love to do, which is make you happy.
Message for locals? Please come down and see the bar before making judgements. We’re really nice, and this is a very relaxed kind of drinking, not a rowdy one.

More extreme and worrying is recent opposition to new student accommodation on Holmes Road, which only feels like the latest attempt to force a single worldview onto a postcode long celebrated for its diversity. Surely a range of ages is vital to the health and vitality of any locale?

Thanks goodness for a fresh – and yes, transient – student population here. They too, are not an invading army of youthful abandon and late night shouting. Geographical make-up is always changing. Look at the Victorian fears of Kentish Town going downmarket with the arrival of the railway. There was, of course, no golden era to which we should be trying to return.

So why are the scales terribly skewwhiff in favour of the UK’s nimbys today? Especially as it’s a power that can reach perverse levels if left unchecked, even more when wielded by the wealthy.

Witness the recent spat in leafy Primrose Hill, where a proposed quality bakery and pizzeria – the kind of business pretty much every high streets in the country would welcome with open arms – generated protests for being “another” pizza restaurant.

This is also where a grumpy neighbour has ensured by law that windows and blinds must remain closed at the famous Triyoga studios, because he doesn’t find the occasional sound of “ohm” being softly chanted to his liking.

And it’s not just the older crowd who are prone to crushing urban regeneration if they don’t like its soundtrack. A vibrant nightlife scene transformed east London’s formerly decaying Hoxton Square into an achingly hip address, only for some of the new residents to clamp down hard on the very venues that had fuelled their swanky apartment’s desirability.

Tell us your story? We first found this basement when looking for a pop-up space last summer. It needed a lot of work so became an all-consuming commitment.
Describe your bar? It’s an extension of our living room, of us. We want you to relax in the corner while we do the work, and feel like we’re part of the furniture too. We’ve trawled antique fairs to find all the pieces. It’s a labour of love.
What should we order? Drinks you won’t find anywhere else. Try a Park Bench – deconstructed cider served in a Strongbow can with a brown paper bag around it, and sausage roll on the side.
Message for locals? Come and have a look. There’s nothing untoward going on, no trouble. We’re a young couple who’ve devoted their life savings into this project to make it work.

And oh no, it’s not just London either. Over in New York City last month, filmmaker Spike Lee went off on a controversial rant about the gentrification of Brooklyn, with newcomers complaining his father was playing acoustic jazz – as he’s done for 40 years – too loudly.

But in his anger, Lee also displayed many of the traits of a nimby himself, holding a classic conservative, anti-gentrification stance about leaving neighbourhoods “as they’ve always been”. The golden age to which people refer like this almost certainly never really happened and was always a time of real hardship, whether in Brooklyn or London, NW5.

Living in a city is as much about the soundscape as it is the job opportunities and the wealth of entertainment. Lives can indeed be made a misery by unchecked noise pollution, doorway piss or brawling patrons, but yoga centres? Pizza options? Diminutive cocktail shops selling libations at a tenner a pop?

It all seems so counter-intuitive, at a time when the indie UK high street is under real threat of extinction that those of us lucky enough to live in locations where exciting new businesses want to open are in danger of having our neighbourhoods hobbled by the self-appointed “fun police”.

A ‘them versus us’ relationship is never healthy for a neighbourhood. Yet we must all be mindful of slipping in to it, since it is a most basic facet of tribal human nature to do so.

Tell us your story? After resurrecting a small distillery in northern Poland five years ago and creating Vestal Vodka, I’ve been running pop up bars and Vestal Voyages. I saw an opportunity for the disused toilets near my home and, two years of planning later, I’ve applied to change their use to a neighbourhood bar.
Describe your bar?It might seem a strange concept but a neighbourhood bar is really a place much like that in TV’s Cheers, where regulars are encouraged to hang out after work and exchange ideas and thoughts. We’ll source ingredients from allotments locally and focus on seasonal menus. Look out for my mum and auntie’s homemade sausage rolls and scotch eggs made fresh daily.
What should we order? We’re still finishing our menu, but a popular one from our boat is called “Proper ‘Anchor” and is served in a martini glass with aged Vestal Kaszebe 2013, grapefruit juice, agave syrup and Angostura bitters.
Message for locals? I’ve sought to engage with all neighbours on this project as I feel it can add to the prosperity Kentish Town is currently enjoying. Whilst I’ve read there are a handful of objectors – who I understand object to most proposals in the area – I’ve been overwhelmed by the support. My hope is that people can see that small independent operators are at the core of what makes Kentish Town amazing, not the large coffee chains and national estate agents.

The alternative to later opening hours and old pubs turning ‘gastro’ essentially means a return to the mass 11pm kicking out time exodus, where, growing up in Kentish Town in the early 1990s, I remember regular brawls outside the Vulture’s Perch (now gastro-ed up into the late-licensed Oxford, no less). Some golden era.

Does anyone in their right mind really want the toilets to remain boarded up, the Bull and Gate to become flats, the talented mixologists to move on? Of course not. Nobody has ownership of the area they live in. The magic of a metropolis, much like life itself, is that we are simply there in the thick of it for a defined period of time.

That time should be a celebration, an explosion of different lifestyles and leisure choices, with opportunities to enjoy them all.

13 thoughts on “The nimby threat to London’s cultural landscape”