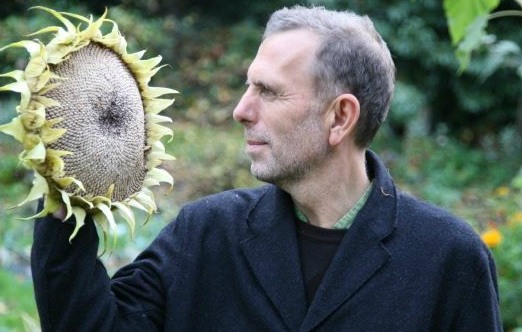 Allan Jenkins grew up in south Devon. He moved to London at 15, though ran away to an experimental eco-community in Anglesey a few years later. He has lived in Kentish Town since 1987, and edited the Observer Food Monthly for four years.

When are you happiest?
Summer afternoons at our biodynamic allotment at Branch Hill in Hampstead (cliché clanger, I know!), the sun on my back, a kestrel swooning overhead, eating broad beans from the pod.

What is your favourite sound or smell?
I love the smell of my wife and the making of marmalade, though there is a rambling rose on Kelly Street, near Mario’s Cafe, which can sometimes run them pretty close.

What is your greatest life achievement?
Watching my daughters grow into smart sensitive women. My eldest lives only a few doors down and the youngest is in Kilburn.

What is the most important lesson life has taught you?
London mostly doesn’t care where you come from, it’s where you want to go that counts more.

What is your earliest memory here?
Seeing Patti Smith support the Ramones at the Roundhouse; buying bread and cannabis in Prince of Wales Crescent, a street of squats obliterated to make way for Talacre (I think). I walk there on the way to the canal and the Guardian offices and try to re-imagine how it was.

What makes you unhappy?
Walking past the street shrine to Melanie McNamara McCarthy, who went to St Dominic’s school opposite where I live, shot dead in Dublin when she was just 16.

What do you all think would improve the area?
They keep trying to tart up Queen’s Crescent which I like for Donna’s flower stall, Jack’s fruit and veg and its many Asian shops, but it is resistant to change and can still be a bit threatening late at night.

What is your most unappealing habit?
Very occasionally putting rubbish in other emptier, bigger bins, pretty unforgivable I know.

What is your guilty pleasure?
Dunno if it’s guilty enough (see above about the bins) but I find the spaghetti vongole at the cafe near the Parliament Hill running track pretty irresistible.

Where do you hang out?
I have been known to eat at Chicken Shop, Pizza East and the Bull & Last, but I am normally all eaten-out by the time I get home, though I do miss kids’ birthdays at Marine Ices which I haven’t been back to since it was sold. Other than that, I can be found at Earth Natural Foods, the Parliament Hill farmers’ market and searching for mangoes in Queen’s Crescent.

Who or what do you hate and why?
No one or thing much, though I sometimes curse the 46 bus.

What’s been your best experience here?
Walking over the Heath on a sunny morning, and looking out of our kitchen window to see my daughter Kala sitting on her garden steps.

What do you most dislike about your appearance?
I am not that big a fan of my thinning hair and thickening waistline, but then I figure it is my job to eat for England.

What’s the worst thing anyone’s said to you?
A neighbour once told me he was glad we had moved in as he was “worried about Nigerians”, though that was before he met my mixed-race kids.

Tell us a secret.
Our cats were buried on the Heath wrapped in posh Kashmiri scarves until a fox found them.

What has your career taught you?
That a homeless kid brought up in care can become an award-winning editor at a national newspaper. (And that enough people seem to have an bottomless appetite for reading about food.)

What is your favourite dish and why?
My Danish wife’s meatballs because they taste of time, place, and walking by the white beaches of the Nordic seas.

What did you do today?
Hosted a Guardian event at a rented townhouse with chef Tom Kerridge and Jay Rayner for some senior advertising execs we would like to spend more money with us.

Describe yourself as an animal.
I would love to say a lurcher but suspect a labrador or mole is more appropriate.

This is box title
Want to nominate someone? Email any suggestions for this column to info@kentishtowner.co.uk. If you’re a fan, peruse our clothing range of t-shirts, tote bags, kids’ hoodies and babygros here.