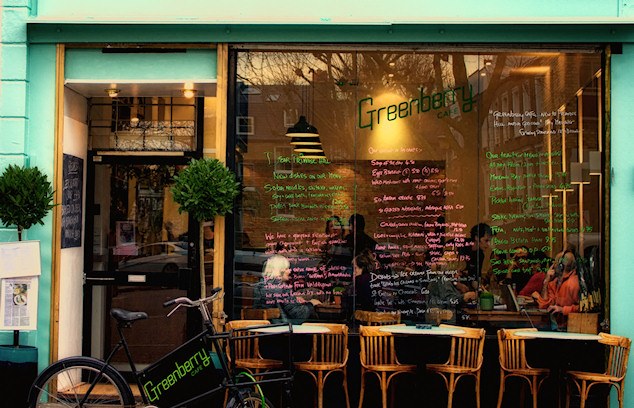 We had won the lottery. Seriously. And decided to celebrate our windfall (a whopping £115) in what you might call that great aunt of hipster neighbourhoods, Primrose Hill.

And where better than somewhere like Greenberry Cafe? Owned by renowned restaurateur and ice cream obsessive Morfudd Richards, it opened 18 months ago, on the site of hoary old Russian gaff Trojka, and personifies – naturally – the great aunt/hipster look: cute branded fixie outside, bare-brick brasserie interior, back bar stuffed with books and bottles, counter dining.

Reviews everywhere from Evening Standard to The Times simply raved about the place; and yet, despite passing frequently, we had never been inside. At weekends it’s simply packed with buggies, while the good value weekday evening set menu (just £11 for two courses) has remained on a vague to do list.

So it was that we descended, grubby winnings in paws, on a spontaneous midweek evening visit. Service was a little eager as we stepped inside: a request for an Aperol spritz (c’mon, we were celebrating!) had the maitre d’ darting out, Fawlty Towers-style, to buy a bottle – and then returning two minutes later empty-handed as the off licence had “run out”. After such a dramatic start, it was curious that we then had to wait a longish while for anyone to come over and actually take our drinks order. Meanwhile, the restaurant remained quiet. And stiflingly overheated for a mild night.

Anyway, things looked up with a glance at the menu: healthy salads with interesting pairings such as quinoa, apricot and pistachio, “Stoke Newington” smoked salmon, Iberico ham, posh burgers, Asian-infused mains. It’s the all-day bistro vibe that works so well everywhere from Soho to Hackney.

Yet the food was underwhelming: perhaps poor luck, but not really forgiveable when we had abandoned the set menu to go swankily a la carte. A butternut squash and sage filling in the tortellini may have been rich and sweet, but the pasta was chewy, tough even, surely not fresh that day. Pork belly, sesame and watermelon fared better, yet the slippery, unshapely pile on the plate felt like an amateurish recreation of a dish that works so well when refined (Made in Camden served a beautiful version a while back).

The mains? Not bad, but without even a squeak of the “wow” factor that engenders a return visit. A pleasant sea bream with pak choi, lemongrass, soy and ginger was no match for the signature at nearby Michael Nadra; tagliata di manzo – marinated strips of sirloin – neither as tender nor flavourful as over the road at wine shop-cum-trattoria Negozio Classica (both are the same price, incidentally, £19.50).

And before Greenberry’s undoubted legions of fans hit the comments section below, I’ll underline that it was a perfectly OK dining experience, if we remove any sense of expectation. Perhaps that was the problem, the weight of its reputation. Or perhaps we should have stuck to its cheap set menu. Or come back for brunch…

Perhaps, perhaps, perhaps. Greenberry was, we concluded with a shrug, a little like being introduced to someone we so wanted to like – yet ended up not really feeling anything for.

And there must be a moral in there about not blowing a minor lottery win on a Tuesday night. Ahem.