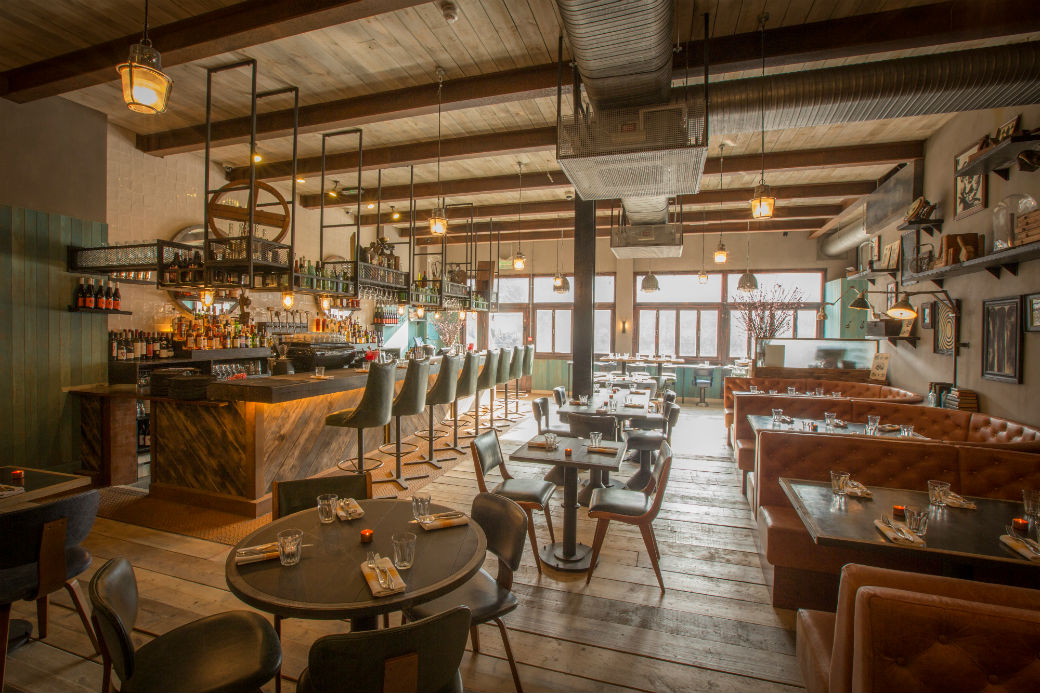 Is Q Grill the hottest north London opening of the year to date? We’ve eaten there twice in the last ten days (once paying, once upon invite) in order to deliver as accurate a report as possible – at this early stage, of course.

It’s the third restaurant from Des McDonald who, after last year’s stylish Fish & Chip Shop on Upper Street, recently unveiled the acclaimed Holborn Dining Room. Its concept? “Farm-to-grill meets Camden Town”. We’re not sure what that means either, but at least it sounds interesting. McDonald describes it as “the sweet-tasting BBQ of a traditional Memphis-style Smokehouse, the charcoal grills of South America, and the delicate raw flavours of coastal regions from Asia to Brazil”; and, with chef Phil Eagle from Hix, as well as a couple of ex-Wolseley front of house types, they know exactly what they’re doing.

Our first visit was during last week’s “soft opening”: the large space – an urban take on “rustic” with neon signage, huge open kitchen and leather booth seating – was packed already. The atmosphere was rowdy and exciting, the vibe very Pizza East.

We grabbed the last two stools at the bar. The simple menu outlines raw, grilled and smoked things aplenty, from scallop ceviche and blackened tiger shrimp to pecan wood-roasted chicken, as well as pulled pork sandwiches, ribs and hotdogs. Specials are handwritten on a scroll (not as pretentious as that sounds).

Yet, for a destination that appeared so instantly slick, we were surprised the waiter seemed entirely daunted by our order, and was less than confident noting it down.

Everything duly arrived, however, so perhaps he was simply being over cautious (it was early days, after all). Octopus, charred on the grill, proved meltingly tender, pimped up by on-trend kimchi, blood orange and capers. Steak tartare was moreishly rich but less flamboyant than at, say, the nearby Fat Butcher at the Grafton or Dean Street Townhouse. Isn’t it prettier if the yolk wobbles on top?

Meanwhile, juicy southern fried chicken, served with a seasonal wild garlic green sauce, could be a match for Argentinian classic La Patagonia. In fact, the only real let-down was flat iron steak. We’re huge fans of cheaper cuts of beef – especially at the eponymous restaurant in Soho – and here, although rosy-pink and temptingly sliced, the addition of anchovy butter didn’t quite inject that craved-for umami hit.

We returned five days later upon invite (unconnected to our previous experience, incidentally). Eager to show my friend Nikki how buzzy it was, I was a little disheartened to enter a restaurant a third full; at one point a chef was standing in the open kitchen, idly texting.

But there were no service glitches this time. A clean-tasting sea bass tartare was packed with chilli (too much, groaned Nikki), the accompanying strips of plantain adding texture and contrast, as well as doubling up as a handy scoop. Even better were tongue-soft red slivers of tuna crudo with “bashed” avocado.

After the underwhelming flat iron, it made sense to dive into a more expensive cut, the NY strip steak (at £25, in fact, it’s more than double the cost). Taken from the short loin (and flown over from Creekstone Farms in Kansas – yikes!), this is a particularly tender part of the animal due to the fact that the muscle does little work. And agreeably, it didn’t disappoint one bit: the meat sliced smoothly – like butter, in fact – its charred flavour nearly, but not quite, a match for that holy grail, Hawksmoor. Nikki’s squid “a la plancha” wasn’t quite so majestic: the bacon was tough, she reckoned, although the grilled fish more than evoked a sweltering afternoon at some exotic chiringuito.

We finished with one of those sensational exploding chocolate fondant cakes that I’ve always fancied a shot at baking but, for waistline reasons, have never tried. And there are cocktails too; Nikki raved about her Cobbler, all gingery bite and lemon tang. The house wine? Fine of course, but – and this is not just aimed not at Q Grill – when did it become the norm in London for it to clock up at over £20?

So will this new opening have the desired Pizza East effect and bring a flood of both locals and Londoners to the Chalk Farm Road? I think so; it’s a formula that seemingly can’t fail. And, as we’ve said before, together with places like the relaunched Made, nearby hipster ribs joint Porky’s and Honest, there’s a nice little food scene blossoming on a strip that’s definitely not just for tourists.