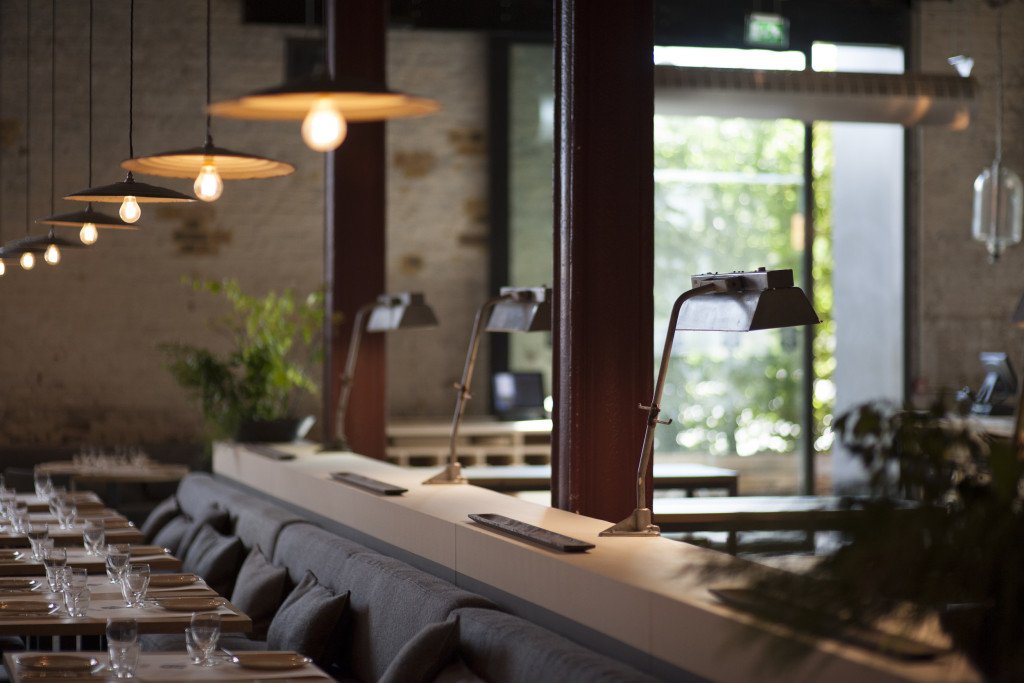 It’s taken over eighteen months for us to write a full review about the game-changing Caravan on Granary Square. The second branch of the small plates-focused original on Exmouth Market, it’s a big Kentishtowner fave, and on a different scale to its cramped sibling.

In fact, outside certain regular haunts in NW5 and Soho, the King’s Cross branch is the restaurant I’ve probably eaten at more than any other in the last year. (And there have been no discounts, press freebies or favours offered, either.)

The first rule is really that everyone queues like everyone else. And there are waits at most times of day: a recent attempt at Sunday morning coffee was met with the middle class horror of every table both inside and outside already nabbed. At 11am! Still, brunch is a big deal round here, as our columnist Clare Zerny raved recently.

With its backstory as the heart of London’s 90s clubbing district, there’s a certain romanticism to the former grain store sandwiched between Central Saint Martin’s and, er, what is now called Grain Store itself. Dating back to 1851, its interior has the feel of a working factory environment, yet sexy enough to feel like Manhattan, Berlin or Vesterbro in Copenhagen. Vast and dimly lit, its kitchen – visible but separated by wire mesh – is a hive of activity reflecting the couple of hundred-strong crowd at any one point.

The menu is described by the restaurant’s founders (who include Miles Kirby, ex-head chef at Providores) as “well-travelled”, and I’ve probably rambled over most of it. Preferred dishes? Deep-fried duck egg exploding over babaganoush, with chorizo oil and cumin; meaty mackerel fillet balanced by seaweed, moromi miso, cucumber; smoked trout with sweet salsify and curry mayo; and, a particular hit, chorizo and sweet potato croquettes dunked in moreish saffron aioli.

An absolute highlight though, is scallop carpaccio with grapefruit, ginger, jalapeno and spiced popcorn: a textural delight, its sharp, sweet, and chilli flavours all high-kick on the tongue.

And if this all sounds a bit adventurous for a midweek after-work supper, there’s always the pizza menu: a basic marguerita is just £7, or there are intriguing combinations like chilli roasted butternut squash, pesto, and piquillo.

Caravan King’s Cross is a leveller, too. With the fashion college next door, they know it’s important not to alienate a younger hip crowd with smaller budgets, so the whole experience is laidback (detractors might argue, infuriatingly so), with a big bar area, and affordable-ish drinks (decent prosecco on tap, Camden beer, and the usual array of Venetian aperitifs such as negronis).

Thus a genuine mix of young and old, locals and visitors, hangs together in a noisy, infectious atmosphere. Service is efficient, speedy, but not overbearing. And it doesn’t pay to be pushy at the bar. The other day we watched as a woman demanded attention – only to be met with stony silence.

If you haven’t booked, don’t be put off by the fact that the front-of-house will always try to deter walk-ins from entering (“at least an hour’s wait,” is a refrain). Nod and smile, they’ll hand over a numbered bag of flour, and hover as close to the bar as possible. When a space comes free, and a bar stool, grab it. You can now eat. This whole process took about fifteen minutes on a Friday evening.

So, then, why wasn’t a recent lunch at the original Exmouth Market branch much cop? Although we’ve been several times over the years, an impromptu visit the other Sunday underlined all that is seemingly different between the two outlets. From the brunch menu (which is exciting and innovative) we ordered decent pork schitnzel with beans and average French toast with avocado and bacon. A dud? The “breakfast salad” for £7.50, a diminutive portion of microscopic goat’s cheese, caramelised onions and leaves.

Worse still – and we may have simply been unlucky here – the service was downright terrible. Our frosty waitress forgot the wine, orange juice, and insisted we had ordered pancakes. A coffee didn’t arrive (and was cancelled), an order of sourdough forgotten. In short, there seemed neither the well-oiled control that exists at the very slick King’s Cross operation – nor the charm.

Despite generally always preferring a smaller, intimate restaurant to its big brash sister, in Caravan’s case I’m quite happy to stick with the more enjoyably riotous N1 incarnation.

And readers will know how much we love that bucolic stroll along the canal back home afterwards.

This is box title
Caravan King’s Cross 9/10. Small plates upwards of a fiver, but most average about £7+ (allow two or three per person). Meal for two with wine around £60+. Caravan Exmouth Market scores a helluva lot less for both food and service.

What are your experiences of both branches?