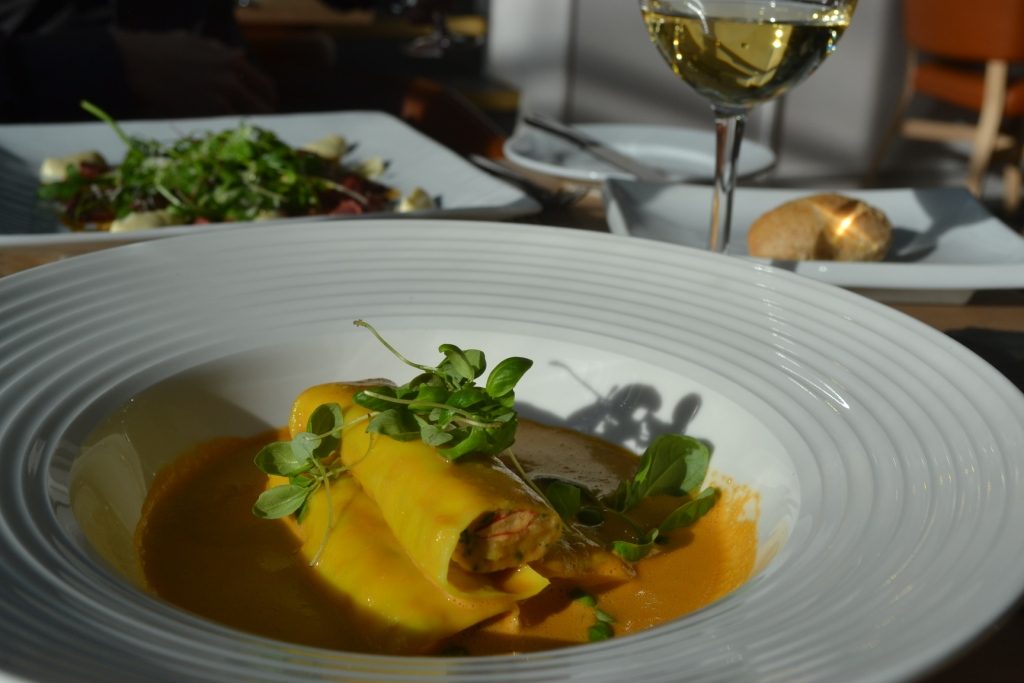 Where do you normally join the canal when you’re on a Saturday mooch? Kentish Town Road? Camden Lock? We always like to hop on at Royal College Street and either meander east, towards King’s Cross and Islington, or west past that sequence of locks to Primrose Hill (by the way, has anyone ever eaten at the floating Chinese restaurant?)

After you pass the quirky Pirate Castle, and just before the dreamy houses of St Mark’s Crescent – whose lawns dangle onto the water, willow trees rustling in the breeze – take a right up the alleyway that leads to Gloucester Road. Here, a useful route to the once-great Engineer, is where you’ll stumble across a half-hidden building.

A few years back, this mix of modern and old –  Grade II-listed horse tunnel beneath swanky new apartments  – opened as Sardo Canale, an acclaimed Italian restaurant. A bulking olive tree domineered its outside eating terrace; now gone, it was sold when the previous owners left.

Then a much more low-key operator took the space. Michael Nadra (who has worked at Gordon Ramsay’s Petrus, Chez Bruce and La Trompette) is the bloke behind hit (eponymous) neighbourhood restaurant in Chiswick, and saw the opportunity for – as he calls is – a restaurant, martini bar and garden.

So far, so P-Hill. The other day we were invited to try it on a quiet midweek lunch. From the four eclectic dining spaces, we sat in the small airy room overlooking the garden. It’s west-facing, so the midday sun streamed in, making the experience pleasantly holiday-like, as we lounged in Scandi-style leather chairs, Ibizan-style chill-out music flittering away in the background.

As it’s a martini bar – despite it being a Tuesday lunchtime – we thought, why not? And a pleasantly smooth Hendrick’s duly arrived with coiled cucumber and the kick of lemon juice, while a Yorkshire Rhubarb had a slightly too heavy hit of vanilla for my bitter-loving ‘buds.

There’s a quite bewildering array of menus and prices, to be honest. Cheapest weekday lunchtime deal is the posh burgers for a tenner. There’s also a good-value monthly special (on our visit it was a burger plus side plus glass of wine for £13). Then there’s the a la carte, a full tasting menu, and a 20% off a la carte at lunchtime. Phew.

From all this we decided to go for the latter. Despite rather lengthy descriptions of each dish on the menu, the starters were actually both simple and memorable: there was melt-in-the-mouth thin-sliced wagyu (the intensely marbled Japanese beef) with creamy truffly cauliflower puree (accompanied by a light Pinot Nero); and soft and fleshy lobster cannelloni with a bisque (pictured), arriving with a tasting-sized Albariño.

The mains went one better. The first married simple sea bass with Asian flavours – soft dumplings bursting with scallop and prawn, oriental greens, the hit of ginger in a carrot puree and zesty lemongrass; in fact, it was so triumphantly healthy and fresh it could have made to order for the pencil-thin girls who must lunch often enough round these parts. Meanwhile, a solid Rasteau red vino matched an earthier medium-rare lamb rump with braised neck and winter veg; despite its meaty richness, it was pretty as a picture. Something you can’t say about many stews (or at least the kind I cobble together of an evening).

And so the show went on: though striking in appearance, least successful was probably a double-layered rice pudding with separate pot of rhubarb (served with a vin de fraise), just erring on the side of blandness; far better was the explosively-soft chocolate fondant and salted caramel – textural and oozing with moreishness.

Nadra’s one helluva chef, is the only conclusion that can be made. A slight downside? Despite the relatively well-priced lunch menus (presumably aiming at a gastropub-friendly local crowd), the restaurant actually comes across as a non-casual, quite serious place, especially compared to the smiley and down-to-earth chef-patron himself; and in this way it contrasts the foodie haunts in rowdier Kentish Town and Camden.

I wonder too about the separate dining areas; while each is packed with character, as befits the attractive mix of old and new, how does the atmosphere hang together in the evening? It would, we concluded, be nice to return to find out.

Oh, and afterwards? Walk it off with a wander up to central Primrose Hill, using our handy guide, if you wish.