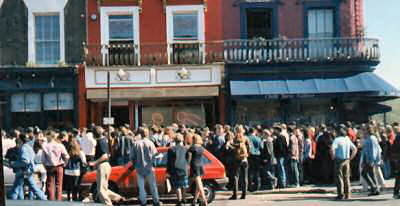 So Prince played an unannounced gig at the Electric Ballroom last night. And by all accounts, the crowd lapped up the intimate(ish) performance for around an hour. “The doors were opened for the last few songs to fans who had been queuing patiently in the rain,” reported The Guardian, “after monitoring the Twitter-borne rumours of Prince’s location throughout the day.”

But did you know it’s twenty years since Prince opened his shop on Chalk Farm Road? Back in 1994, in front of a road-blocking crowd on Camden’s central thoroughfare, the diminutive one took over No.20 as Sign O’ The Times (after his 1987 album), painted its exterior his trademark purple, and dedicated it to flogging all manner of artist paraphernalia.

“It was mass hysteria,” remembers Jonathan Simpson, now “rock ‘n’ roll” Mayor of Camden. “We lined up for about four hours and got to see him for two seconds on the balcony. After waiting even longer we got inside and bought some bad-smelling purple incense. Naturally, it was worth the wait. The guy’s a genius.”

Big sellers? The “cloud” guitar, purple trench coats, Japanese imports on vinyl, and one of the Nude tour outfits which hung on the stairs going into the basement.

At the time, Prince – who had changed his name to the troublesome Love Symbol – was top of the charts, but as his career stalled mid-nineties, so did the shop, and it finally closed in 1996.

“It was pretty small,” recalls fan Sean2003. “I remember struggling to find stuff I’d actually want. There was a whole load of candles, but I was hoping to find music to browse (eg a full set of CD singles and vinyl). I bought a pencil with symbols on it and watched a live video upstairs in the cafe. A great idea, but he could have pushed so much harder to make it work.”

And one guess what the shop is now, in 2014? Why, a chain outlet that we shan’t bother to name. Chaos and Disorder indeed.

Were you at the launch of Prince’s shop? What was it like?