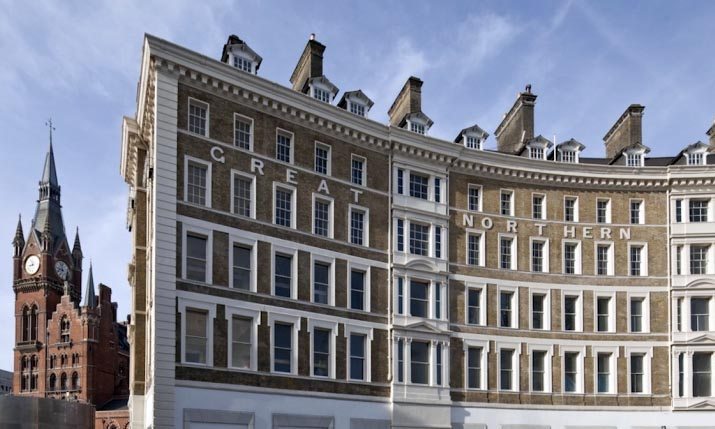 Ancient though its thoroughfares and landmarks may be, King’s Cross is still adolescent as a global tourist hotspot. And its successful blend of Victorian-meets-21st century travel infrastructure and turbulent urban history are still no match for an hour stood in the pissing rain outside Madame Tussauds for many who visit the city.

Yet as world class hotels and restaurants continue to bristle up across these former industrial badlands, there are bountiful reasons not just to visit, but to stay here.

While the throng are still preoccupied with gurning for Instagram in front of Buckingham Palace, it’s also makes King’s Cross a perfect destination for time-poor Londoners to get away from it all, without so much as a Ryanair excess baggage Nazi in sight, either.

Having children is amazing (and all that), but leaving them at home with granny once in a blue moon possesses its own, equally primordial satisfaction too. And so it was that one minute we were up to our eyes in a churning mass of living-room Lego bricks awash on a sea of tantrum tears, the next, incongruously transported to the hushed corridor nods and pristine, crisp Egyptian cotton sheets of the Great Northern Hotel.

“It’s surely the future of holiday travel,” I mused, clearly overcome at the flood of desperately grateful emotions. This oasis might be a proverbial stone’s throw away, but once we’d muscled through the forest of rush-hour elbows on King’s Cross Square, we may as well have been teleported to a secluded island retreat.

The GNH opened in 1854 to some fanfare – the world’s first terminus hotel – but its fortunes have been decidedly mixed. Less than 20 years later came the Midland Grand Hotel and St Pancras Station right next door. Not content with being far more imposing buildings, their arrival required a complete rerouting of the original road up to Camden and Kentish Town, leaving the elegant curve of the Northern somewhat redundant.

Today, after 12 shuttered, decaying years, the reborn GNH’s quirky position and bent have been played as an advantage (despite being Grade II listed, Foster and Partners original 1987 plans for the Eurostar actually saw the whole thing being demolished – for shame) The compromise of modern restoration is a more-than-pokey little reception area, but this serves as a shield from the outside world, allowing guests space to revel in the lofty Victorian aspirations of upstairs.

Already fully enveloped in the hotel’s Zen of indeterminate time and place, we extended a toe back into the real world, sipping a sharpening negroni in the cosy, club-like downstairs bar, (swerving the more raucous, NYC-inspired one at station concourse level).

Plum + Spilt Milk, the curiously named restaurant now fronted by ex-Claridges chef Mark Sargeant had a palpable buzz, enhanced by sweeping views of the commuter concourse melee. From the moment of easing into the banquette seating beneath pendulous golden lights, the service was played just right.

Proudly British small plate starters such as tender cockles and a Yorkshire pudding with roast garlic were each a mini success story, creamed smoked haddock and hen’s egg a more substantial opener, its dreamy textures spot on.

Adopted ‘native’ dishes made up our mains. A delicate prawn and pumpkin curry, scattered with frazzled shallots was a hit with the Missus. My braised rib of beef ‘Bourguinon’ proffered beautifully tender meat, a quality further highlighted by the salty bite of oversized lardons, and all tempered with the carefree decadence of a creamy parsnip mash.

Wines by the glass were mercifully light and well matched. Spanish Flower and the Bee was a crisp white to start, our glasses soon drained. Sicilian Nero d’Avola Caleo an easy red for that rich beef. And our dessert highlight? A hunk of lovely Stilcheton cheese with Eccles cakes. How curiously right.

In the morning, we awoke to an unusual bedside vantage – St Pancras station shrouded in a dense, achingly atmospheric fog. Ethereal light streamed through the tall windows, but it was still tough to get up. A sterling signature breakfast of eggy brioche piled high with berries left no regrets though.

The British Library was one the first of the area’s regeneration destinations and its calm front garden made for a welcome stroll, despite the bite of fog. Inside gets surprisingly lively, every table was already occupied, the thrum of people either nattering or earnestly tapping away at tablet devices fired up on caffeine.

We ducked into the current exhibition, Georgians Revealed. Much of the King’s Cross history you’ll find up at the main Granary Square visitors centre and beyond focuses on the railways, canals, and warehouses of the Victorian era, so a reminder of London life – at each end of the social scale – in the years before heavy industry thundered in, is well worth an hour.

Emerging to deteriorating weather, we made a dash over the road to the climate-neutral cocoon of St Pancras Station. (Read our St Pancras guide here.) We meandered amongst the 800 wrought iron pillars of its vast undercroft, created so the Midland line tracks could pass over the canal to the north, then used as a cold store for Burton on Trent’s finest beer.

It’s an engaging place to promenade without a nagging onward journey to contend with. But do gaze up from the Fortnum & Mason window occasionally, taking in the majestic, sky blue arch of the Barlow shed above. Saved, restored, forever a joy to behold.

However you choose to enter the St Pancras Renaissance Hotel, the former Midland Grand, it is grand. Coming up the sweeping fairtale slope of the main entrance is positively regal, but we negotiated the cosmopolitan bustle and bellboys of the luxurious (if always a little confusing) restaurant entrance.

Civilised luncheon was in full swing all around, but we sailed through, descending for a much-anticipated appointment at the hotel’s Spa. Leaving the hubbub of the termini behind once more, we were firmly back on exotic holiday ground. Deep blue Moroccan tiles and beautiful lighting flickered for our dip in the subterranean pool.

Sometime later, we were summoned from the steam chamber for a customised St Pancras massage, where Victorian-style medicinal potions are worked into the skin for a whole blissful hour.

While I relished the heated bed and faultless deep muscle work, the wife was reclining for a facial ritual (using thoroughly modern Cinq Mondes potions) next door. For those without time even to stay in KX overnight, indulging in a spa visit to the bowels of St Pancras still offers a surprisingly comprehensive chance to totally escape.

We floated up half-built King’s Boulevard, vast new office blocks springing forth on scrub land where the iconic gas holders once stood (these beautiful iron cylinders are now being carefully reinstalled just the other side of the canal; with plans for apartments, restaurants and a cultural space, they are another of the area’s forthcoming thrills).

Too late for the Boulevard’s daily streetfood fiesta of Kerb, we explored the latest attraction, Handyside Gardens. A carefully hewn nod to the past in a quiet corner behind Central Saint Martin’s, planters mirror the undulations of the railway which carried coal and grain here in altogether noisier times. Gentle and informative, this project follows on from the nearby skip garden in highlighting the natural world, still ever-present, thriving, in such a thoroughly urban setting.

A midwinter dusk was falling over the fountains of Granary Square when we took a very late lunch, at acclaimed veg-focused Grain Store (see our previous full review here). A witty green tomato margarita at 4pm? Hell yeah, we’re on holiday!

Our scattering of sharing plates from the all-day menu included delectable wild mushroom croquettes, a veggie merguez (consistency a touch pasty, but still a welcome improvement on every other faux-sausage out there) and a toothsome Panzanella salad with delicate fish cake.

The huge restaurant and bar is a dynamic space, even at this quiet hour, as is Caravan right next door. How easy it would be to work gradually through the cocktail menu for the rest of the afternoon. Nicer yet in summer months too, when a lingering session on the front terrace has all the chic elements of a Continental-style alfresco evening.

Longer daylight hours could have seen a waterside walk round off our city break, perhaps taking in some more history at the Canal Museum to the east or simply marvelling at the towering return of those gas holders along the tow path back to Kentish Town. As it was, we hopped on the 214 bus (our Staycation Express) for swift dispatch back to the land of Lego and tantrums, just in time for the bedtime routine.

This is box title
Accommodation provided by Great Northern Hotel, rooms from £150 per night
Plum + Spilt Milk, dinner for 2 with wine by the glass, around £85
Georgians Revealed runs until March 11th at the British Library, 96 Euston Rd Tickets & info
St Pancras Renaissance Hotel Spa, spa & 1-hour treatment packages from £100
Grain Store, all day menu selection and cocktail for two, around £25 per person