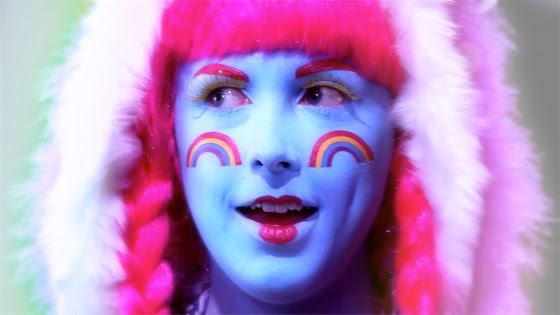 Tonight the 2014 Zabludowicz Invites programme kicks off with the launch of an exhibition of videos by Glasgow-based artist Rachel Maclean.

Maclean weaves together “appropriated audio” and a multitude of narrative references to form “comic odysseys” – with just a touch of darkness.

She’s also the only actor in her work, entering into a variety of guises that embody unstable identities.

The centrepiece of the show? Over the Rainbow 2013, an “absurdist” reworking of Faustian and horror movie genres.

Find out more about video ads for your business
“I was intrigued by the myriad uses of the rainbow as a natural phenomenon,” she says, “as well as appearing in children’s television, psychedelic art and as a symbol of gay pride.”

There are several characters within the film, all played by Maclean: “a baby-blue dog, faceless clones and a talent show judge in 18th century dress,” she says. Audio is taken from a variety of sources: horror films, children’s television, Hollywood movies and “several covers” of Over the Rainbow.

Also worth checking out in the main gallery is another exhibition, A Sense of Things (see above right) which runs for just ten days. The culmination of a three-month collaboration between MA curating students from Goldsmiths College and The Cass, London Metropolitan University, it examines the “world of objects and the strategies artists employ to overcome the often overwhelming clamour of clutter”, and features works by eighteen artists from the Zabludowicz Collection and nine invited artists.

Plenty to get stuck into, then, on a rainy Saturday afternoon.

This is box title
Find the Zabludowicz here. The launch of both shows is from 7-9pm tonight. A Sense of Things runs until Jan 26, and Maclean until Feb 23