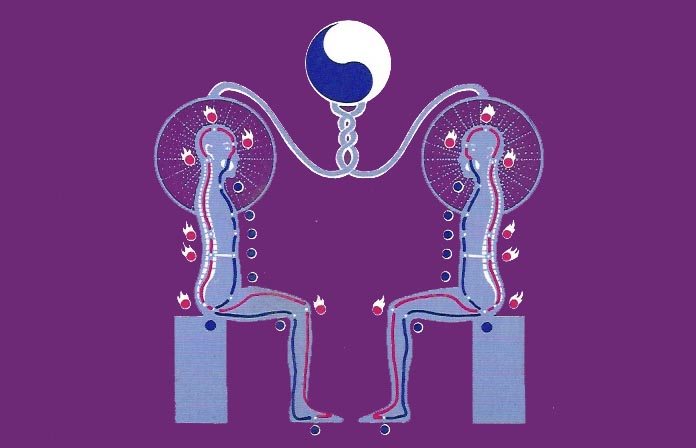 So what’s a Taoist sexual energy class really like?

Jade Arrows is a men-only session for de-stressing and cultivating orgasmic energy for spiritual bliss. Intrigued, we checked it out

It’s January, so inevitably everyone is obsessing over clean living, new gym classes, meditation regimes and the rest. Clichéd and self-delusional as this flurry can often be (as we all know from personal experience) there’s still a lot to be said for some form of mind/body reboot at this point in the calendar.

Jade Arrows stood out on the schedule at Kentish Town Studio, the pilates, yoga and all-round healthy stretching emporium found on the top floor of KT’s disused South tube station. Firstly, the class is restricted to men only. While women have a vast array of scenarios in which they can be serious, silly or supportive amongst themselves, the exclusively male discourse tends to stop at pub football talk, hazily remembered stag do camaraderie and the odd flash of raucous nightclub toilet banter.

Secondly, who wouldn’t be a little intrigued at the somewhat vague list of benefits on offer? The opportunity to learn secrets of the Tao – the ancient, formerly supressed Chinese spiritual system – including the Inner Smile and Iron Shirt Qigong which promote ‘peak performance’, plus lessons in ‘maintenance of the vital organs’ too. There’s a nudge and a wink in there somewhere, and indeed, the teachings of Taoist master Mantak Chia in sexual alchemy and multiple orgasms for men sound like they might be a crowd-puller too.

It all seemed to fit the bill for a dose of uncharted, unpredictable personal improvement anyway, so off I went.

Our instructor, Kris Deva North, is everything you’d expect a practitioner of such mysterious ways to be. He weaves a colourful personal history into his introduction with honed style, from growing up in Mau Mau Kenya to his army years serving with the Ghurkas; and now as a tanned, silver-haired sexagenarian specialising in all things shamanic and tantric.

The class starts with a warning: that everyone thinks Taoist practice is only about sex, when in fact it’s a complex, ancient spiritual system that offers many paths to achieving bliss and self-awareness. Kris illustrates his frustrations with an anecdote about the time he appeared as an expert on the Channel 4 show Extreme Celebrity Detox.

He was plonked on an island with an infamously wayward bunch including nutbag DJs Brandon Block and Normski, plus Beckham-botherer Rebecca Loos, charged with introducing them to a range of purifying skills including fire-walking and Tai Chi fighting. But the final edit cut all out the more thoughtful bits, choosing – rather predictably – to focus on the sex stuff.

As Kris points out, still quite proudly, the show remains available to view online, including scenes of his vigorous demonstration of the practice of genital weight-lifting, if you fancy it.

It’s refreshing, if unusual, to be sat with a group of strangers discussing male sexuality in terms of energy as opposed to the familiar bravado. Kris clearly knows how to keep things light-hearted while delving into some fairly deep personal territory, and if you’re willing to suspend the tittering reflex, learning about your own physical and emotional energy levels is potentially fascinating stuff.

Adding a sexual twist to meditative practice is a great motivator to stick with a new regime beyond the January detox too. And as yoga teachers often point out, toning up the muscles of one’s undercarriage is good for the bedroom as well as the yoga mat.

So with such obvious appeal (at least to those brave and willing enough to talk very frankly with a group of blokes), the main barrier to these Tao classes becoming as popular as a spot of Ashtanga seems to be that today’s quest for personal growth via spiritual/sacred sex comes from the 60s, and often seems locked there. Whenever the topic goes public, it gets played for laughs, with tabloids conjuring up visions of Sting and Trudie engaged in abandoned coitus for hours upon end up in their Highgate townhouse.

It’s a shame, as it is so easy to mock these efforts, but doesn’t the frenzy of the January self-improvement highlight how much we all yearn to take our mindfulness and energy levels more seriously? And a space for men to speak honestly about anything, but particularly their bodies, remains all too rare.

As the class ends, I hope everyone’s not just been here to learn how to have an hour-long orgasm, but it’s difficult to know. Sure that’s a great skill to work on, but as Kris has wisely pointed out, sexual energy is only at the throbbing tip of a much larger iceberg.

Jade Arrows may not change your life in a single session, but the earth might move a little. And it will probably start to do so for longer.

The next men’s class is 16th January.  Women-only Jade Circle class is run by Kris’ wife Anamarta on the same day. Over the weekend (18th/19th) they offer a Tai Chi Intensive course, with a 4-day Taoist Shamanic Healing from the 31st. All at Kentish Town Studio, 141-145 Kentish Town Rd. More info here.