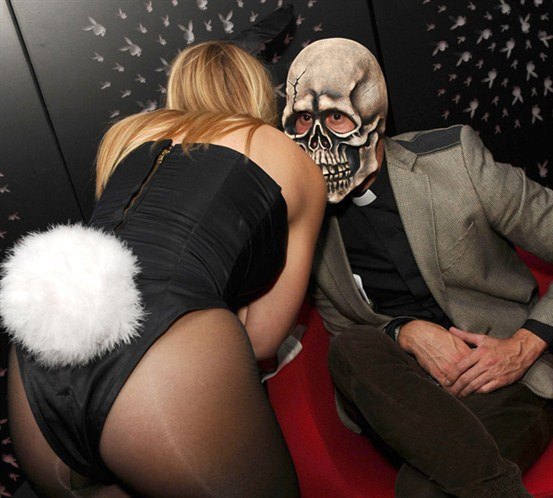 Earlier this week I spilled the beans about my obsession with north London graffiti, but you know what? I forgot to mention that I’ve actually met Banksy himself.

And it’s a funny kinda tale. In a completely unprecedented career move, I became a Playboy Bunny for a short while three years ago. Prior to earning my ears at the swanky Mayfair club, of course, I wouldn’t have recognised Hugh Hefner had he goosed me, cigar in mouth, in a crushed velvet smoking jacket; and I associated that logo with regrettable tattoos and stickers on girl racers’ pink Corsas.

At the time I was writing a screenplay and thought the Bunny Croupier role wouldn’t distract me from my real passion. How wrong I was: night shifts, continual partying and internal politics proved extremely diverting.

Of the many entertaining nights at the club, most memorable was a secret Snoop Dogg gig. Through the green haze of the VIP area, a photographer pointed out an enigmatic man with a skeleton mask and dog collar. The man was Banksy – so, street art lover that I am, I couldn’t resist swinging by for a chinwag.

Polite and well spoken, the masked world-famous artist proved, in fact, rather shy; we had a slightly absurd chat about the aforementioned Playboy logo and pink Corsas, before being intercepted by his protective, though well-mannered, mate returning from the bar. Banksy was swiftly shepherded over to a solitary seat where he sipped champagne in quiet anonymity, his guard-dog ensuring nobody else got near. And despite the banter from the well-to-do mate proving even more surreal than Banksy’s, I wandered off to partygoers new.

It’s easy enough to understand why the long-anonymous artist is protective of his privacy, yet one opportunistic tabloid photographer still managed to persuade me to lean in so he could get the cheeky ‘Banksy and a Bunny’ shot (see pic above). Tsk tsk.

The good news? I soon left the Playboy club for pastures new – the far classier Kentish Town Road speakeasy Shebeen, where I work most nights, should you fancy swinging by for a libation or two.

And yes, if you’re interested, I finally got my script finished. No thanks to Banksy, of course.