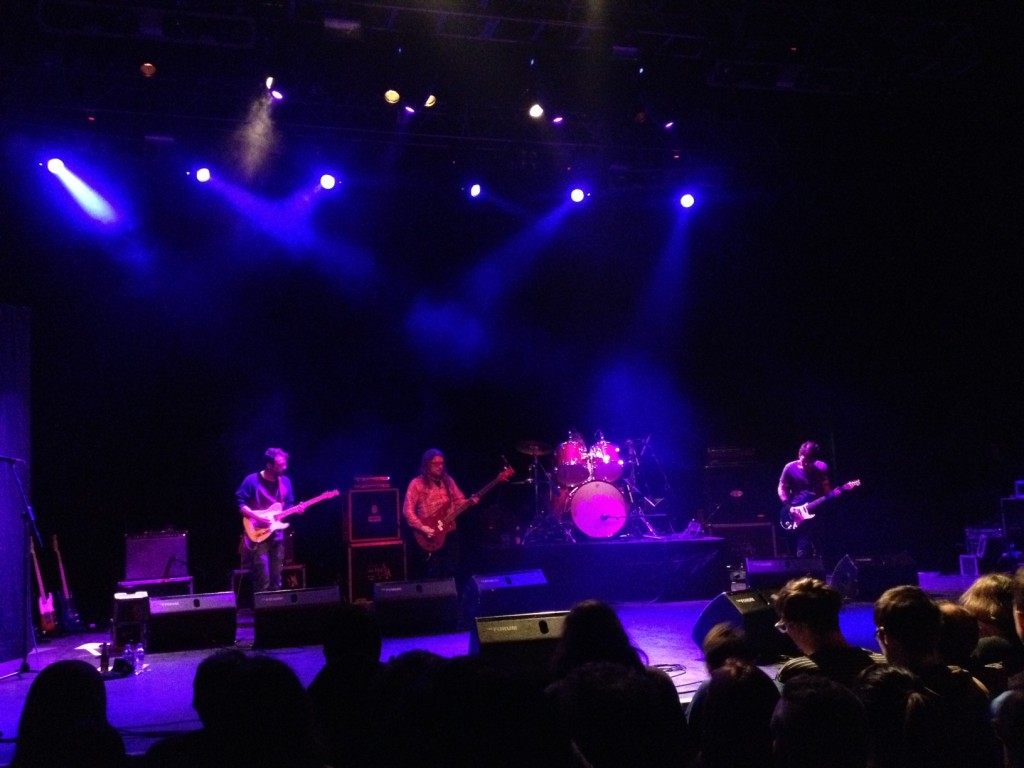 Slint are the semi-mythic godfathers of post-rock whose 1991 album Spiderland holds a hallowed place in the rock canon.

And the boys from Louisville, Kentucky, certainly understand a thing or two about dynamics. Early on during last week’s show at The Forum they deliver the spellbinding Breadcrumb Trail, which starts out as delicately shimmering harmonics before tipping into the hard syncopated rhythms and searing guitar noise for which they’re renowned.

Singer Brian McMahan’s gentle mumblings cause a shiver as he spins the haunting yarn, and snatches of narrative about rollercoaster rides and fortune tellers float by until the crashing chorus guitars let rip. At that point the vocal suddenly becomes all-out yelling. Dynamics, indeed.

Okay, so quiet-LOUD-quiet is an outrageous simplification of what post-rock music is about. But it’s certainly part of the appeal. At one point frontman McMahan provokes a palpable ripple of excitement as he takes a few steps towards the centre of the stage (he’s placed in a deliberately low-key position on the far left for most of the gig).

Why such breath-holding anticipation, people? Because this is the magnificent Washer, and we all know that that forlorn guitar pedal he’s heading towards is set to unleash the most glorious sonic assault to end this seven-minute masterpiece.

What’s strange is to think that these guys, who enrapt the audience so powerfully, had split up and disappeared before their opus had even been released. Part of their enduring mystique, perhaps. McMahan seems a tad self-conscious as he mumbles “Okay, let’s do this…” before launching into album-closer, Good morning, Captain – which we’d all been waiting for, obviously.

Being a bunch of 40-somethings playing music you wrote when you were barely 20 must feel a bit odd. But Slint were so ahead of the game back then that they seem to easily stand the test of time.

The sheer musicality is part of it. David Pajo is an understated guitar legend. No on-stage rock antics for him; just a quiet intensity as he moves from chiming guitar fragments to crystalline arpeggios to raging distortion. Drummer Britt Walford (of Breeders fame) combines military precision, the most powerful snare-thwacking known to man, and an ability to make the drums sound deeply musical.

The famous cover of Spiderland (taken by fellow Louisvillian Will Oldham) shows the grinning wet heads of the band, floating in a canyon. Their boyishly full heads of hair are still impressively intact and it really feels like time’s playing tricks on us.

I walk away from a packed Forum as the crowd spills out onto Highgate Road. All around me people are buzzing at such a rare and precious sighting. Semi-mythic, indeed.