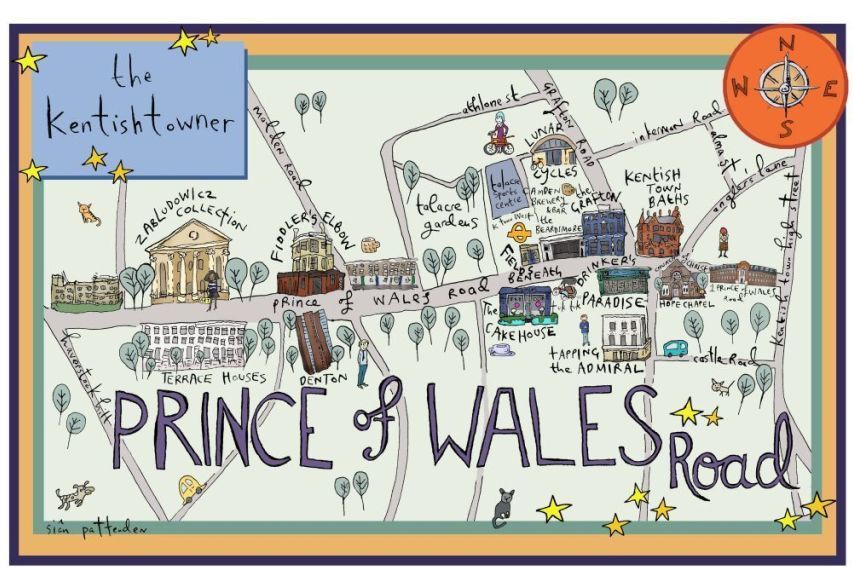 Prince of Wales Road, forming a neat divide between NW1 and NW5, is the First Road of Kentish Town.

Prone as I am to wandering around the local area, not exactly sure what I’m doing or where I’m going half the time, I do know what I’m doing down Prince of Charming Road.

I’m following Adam. Adam Ant. For the swashbuckling super hero of 80s punkerpop was arrested here for affray in 2002 in the Prince of Wales pub (now converted into luxury flats). The locals apparently didn’t like his cowboy get-up and he, naturally quite upset, returned with a pistol to cause a bit of a ruckus.

The pub is now gone, and there may be artisan coffee and diver-caught, cloud-infused, hand-pulled briochettes for sale in the nearby coffee houses, but Prince of Wales Road always straddles the line between chaos and order, devilry and sainthood, dandy highwaymen and “the locals”.

Along the road there is the most incredible architecture to see, from the Zabludowicz Collection in the neo-classical old Methodist church to the serious red facade of the public swimming baths.

But as fine as the terraced houses may be, cheeky Malden Road cuts through the POW like a serrated knife through butter. The highwayman indeed.

Likewise, the Denton estate leans over the terraced stucco houses in fierce patriarchal style – an errant uncle smoking a massive roll up. The Fiddler’s Elbow taunts The Grafton, (surely it would try to fiddler’s-elbow-it off the map if it were nearer.)

Trendy child-men with beards and satchels sup ales in the Camden Brewery; but when there’s a scuffle the models from Select on Ferdinand Street run away. Talacre Sports centre provides an almost ghostly promise of “soft play”, plus a football pitch and £1.50 yoga – twelve people doing Tree while watching the flats being built for, rumour has it, the Chinese. Such exotica.

And all the while, Adam looks on, still, contemplating theses meditative poses – before making a quick exit back to his Primrose Hill eyrie, his cowboy chaps chafing against his North West legs.

So I love Prince of Wales Road, for it is everything to everybody. It is the dandy highway that we’re not too scared to mention.